My clothes occupy far too much space; I only wear a fraction of them depending on whether it is for work, play, rain or shine, summer or winter, or more formal occasions such as dinners and weddings. What causes me to keep clothes that are well beyond their sell by date and out of fashion. Referring to the latter point, however, I have to note that fashions come and go and may be if I hang on to those trousers another 10 years they will be back in fashion and I can wear them with pride.

For the record, which I’m sure you’ve all been waiting for, here are the numbers:

oh, the ties! I know some of them are 20 years old at least and quite dusty but I don’t want to throw away my college tie “Dunelm” apart from all the other quirky ones I have accumulated so I think I’ll put them in the little ball and forget all about them. Maybe when I die I will need one for my own funeral. I find that ties constrict the throat and are uncomfortable. 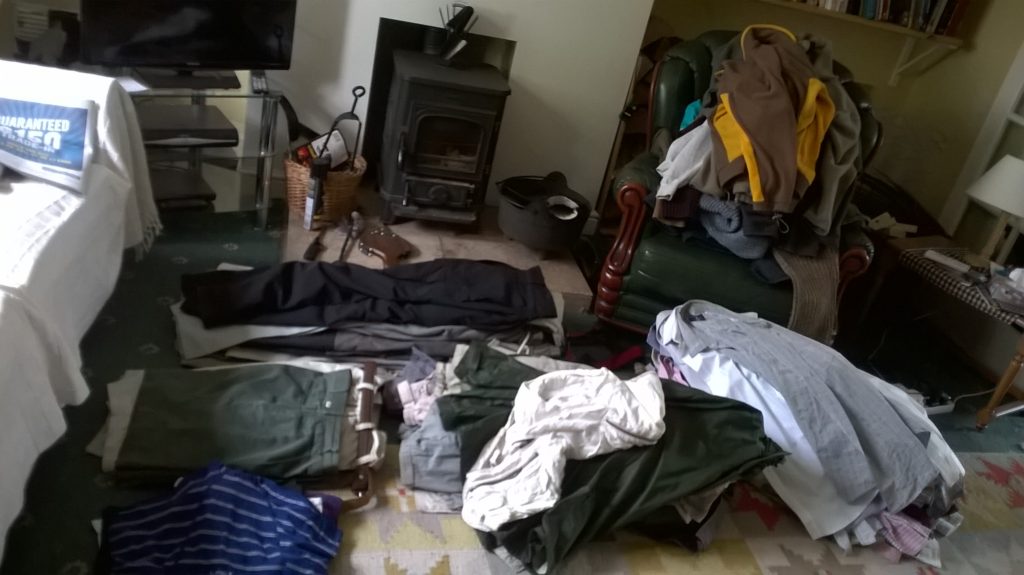 Currently, all the clothes that I own are lying in inglorious heaps in my living room if you can bear to look at them. A sad and sorry collection, un-ironed and unloved but let it be said with a few gems amongst them. Some have exceeded their use because my geographic dimensions have expanded somewhat for reasons that I shall only know when I pass over at the Pearly Gates, not that St. Peter will be that interested in my dimensions. He has seen them all; anorexic, rotund, athletic, unfit, attractive or plain and ordinary.

If, according to the Internet, 151,600 people die each day then that gives this saintly figure 0.5699208 seconds to evaluate each person. By any standards this does not allow time for lingering so I imagine he is interested in other matters, the summation of good and bad we have done, whether we loved our mother-in-law, whether we had been too interested in mammon or whether we sought the greater good.

In this context, the clothes we wear would seem to have very little relevance. I imagine cavemen either had their shorts and top on or they did not. Scullery maids either had their uniform on or a simple outfit for rest and recreation such as it was. And here we are, in the so-called civilised 20th-century, worrying about whether we should wear this or that colour or type of garb and whether we should be regarded as square (which is in itself an old-fashioned term) or cool. My view of clothing is that we should wear it to merge into the background and not draw attention to ourselves.

The other restriction is that we should not dress in such a way as to frighten small children. Apart from that, anything seems to go especially in places like the United Kingdom. You could walk down the road in a leotard and I don’t think anyone would care.

I’m not interested in the current phase of exhibitionism and instant fame particularly among the ladies I have to say. The amount of pounds of fatty tissue women have in their breast area is irrelevant and frankly if I saw the same type of fatty tissue in a butchers window I wouldn’t look twice. I agree this is not the most romantic statement ever uttered, but I do wonder why us men are fascinated with breasts; is it the mother thing?

I suppose we all suckled at one point so maybe this is a past life memory – who knows. There is no proof that a woman with big breasts is any more interesting than a woman with smaller breasts in fact it is probably quite the converse. If she knows that a man will come running when she blinks and pouts then there doesn’t have to be much in the upstairs department if you get my politically incorrect point. PS I was born politically incorrect and I intend to stay that way. PC is for wimps. 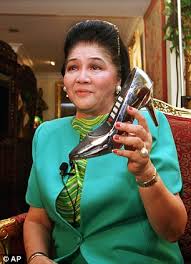 Anyway back to the subject of clothes. I had roughly 150 items to sort out. I have thrown away about a quarter, put another quarter in for washing and the rest I keep. I’d almost forgotten what clothes I had and I realised that I have needlessly brought duplicates. however, I am a long way before I reach Imelda Marcos’ record of 3000 pairs of shoes. She denied having 3000 pairs and said she only had 1060 pairs. I’m quite self depreciating about clothes but a good clean appearance, smartness, is important when making a first impression and I think we all need a few sets of decent clothes when we are about town. I believe Milan in Italy is very couture conscious, ditto Rome and Paris.