Sometimes we feel we should go out but do not decide anything until the last moment. We more or less get a map and stick a pin in it. There is a temptation to go with the familiar but I thought we would try and have a day that was entirely new. So none of this “going to your favourite restaurant”. We decided to aim for pastures new. 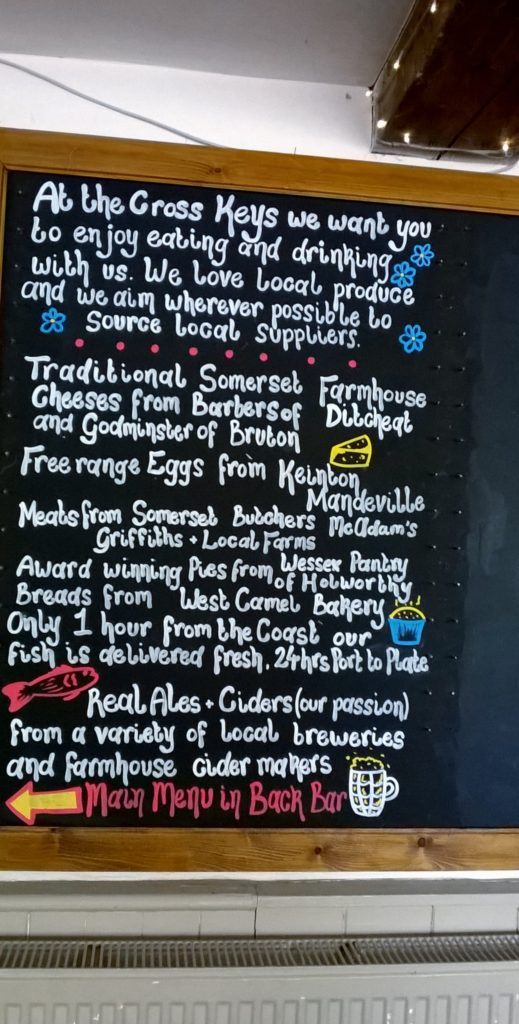 “yes sir, tell them as it is”. NB I get no commissions from doing this; I just like the honesty of the sign.

We decided not to plan lunch and just drive south and choose the first gastropub that took our fancy. We found (above) the Cross Keys Inn where the enthusiastic young staff served excellent local beers and food with sauce to die for. Anyone can heat and cook food, but can the chef find the right sauce  to complement the dish. That is another level of skill.

Lytes Cary Manor is part of the National Trust and is a Tudor period manor house with a small chapel attached and small gardens personally designed by the family. We had the usual helpful stewards, bless them for their voluntary work. The cafe was a disappointment, claustrophobic with little choice of cake. True there was an area outside under the trees where you could sit in clement weather. I do wish people wouldn’t charge more than £2.50 for a coffee and if you are going to charge £3.25 for a cake, make sure the portion is a decent size. In the house itself, there was the usual olde worlde atmosphere which I drank in as I normally do. I find that National Trust members know how to behave, do not throw litter around, generally have respect for the properties they go around. During the week, at least 80% of them are of pensionable age.

What was an unexpected pleasure, and most of pleasures in my life are unexpected, we discovered an allotment abutting on the property for once not owned by the local council, but on this occasion by the National Trust itself. We went around the allotments which are apparently open to anyone and talked to a couple of tenants. I observed that the weather in the south part of Somerset far from the Mendips is definitely warmer, more conducive to early maturing of fruit and vegetables. I took a large number of photographs which I will circulate to my own allotment tenants

We then drove on to Castle Cary. We went to a cafe/hotel and ordered a cake, coffee etc. Unbeknown to me Françoise had bought some candles which she placed on the cake and lit them and sang happy birthday to me.

We left the cafe and found a ‘bottle shop’ as they are called in South Africa. The owner is English but spends much time in France he feels more French than English. He only buys the best champagne and wine. Evidently, he loved France so much he bought up a whole village and had it renovated. there was no wine in the shop for sale at less than nine pounds and I noticed the odd Magnum of wine for £150. An impressive shop. It’s called the Wine Wizard if you want to Google it.  As he was in hospital for an appointment his place was taken by his associate Linda.

Linda had an amazing voice and presentation which was immediately obvious when she greeted us.  I thought she was an actress and told her that she could be. I light up immediately when I sense that someone is a real human being, full of vibrancy and joy. She said that her parents had both recently died. I did my intuitive bit and found that both the parents were very happy in their new environment. Linda concurred saying that they had suffered many years of illness and now they were together again. anyway, I bought a very expensive bottle of champagne which I look forward to consuming with Françoise.

The whole meeting made me realise that most people are dis-empowered because they do not have the courage to be themselves for fear of being laughed at or misunderstood. It is so terribly sad. I do miss real human beings so terribly; it just makes my day to meet someone like Linda. In fact she was the ideal way to end our lovely birthday celebration. It was clear that Linda had had a flying start in life because her parents were happy together and she had an example from when she was in the womb. she says that she is always lucky but I think this would be the case if everybody felt loved and valued. There is enough room on the planet for everybody to be lucky. I wonder how many examples of so-called child abuse happen because the person is trying in some twisted way to heal themselves from the terrible conflicting signals which they must have received either in the womb or shortly after in their early life.