..a recounting of Pepys’ business matters.. then… So home and to my office, and business being done home to supper and so to bed, my head and throat being still out of order mightily.

Poor old mouse. He carefully built a winter nest in a wheat field, only for it to be destroyed by a ploughman.
Another mouse, pictured, has had an ingenious idea but that may not help him. Full credit for trying though.

I would not survive in prison or should I say, I could only survive by switching off any desire for freedom otherwise the conflict might tear me in half. I would just live day by day, hour by hour. Franklin D. Roosevelt has a point when he says “men are not prisoners of fate, but only prisoners of their own minds“. Horrible to be in kept in prison indefinitely without charge, as is the case in many countries.

So, on with the day. I positively like it when I do not know what is going to happen. This coming Wednesday my diary will have it’s first mention in our local Journal here in Midsomer Norton. I don’t think our local population is literary orientated but the idea might catch on with one or two people. I have had site visitors from all over the place – Dublin, Andover (UK), Copenhagen, Helsinki, Lucerne, Wichita Kansas and Menlo Park California. I am unlikely to meet them but I love the idea that someone is reading my stuff and possibly being influenced by it or maybe even being challenged to write their own diary.
NB Site stats can be skewed by the visits of robots and spiders but fortunately there is software to eliminate most of these. 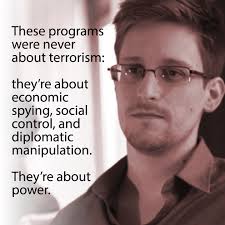 Menlo Park (above) is a government computer which scans and stores all web sites attempting to spot subversive information.  The amount of information that ‘they’ have on us is quite formidable in depth and breadth – browsing habits, telephone calls, travel plans, purchases. Have you ever wondered why an item that you searched for pops up when you are browsing for something else? Amazon, Ebay, Google  and Youtube are efficient at this. This profiling is quite brazen but most people do not seem to mind and regard it as a fact of life. I have long taken the view that ‘privacy’ is an illusion albeit comforting for some. We are all in the same boat, so writing about my personal life is no big deal. In publishing it I do not feel invaded but rather that I am taking part in a sharing, one human being to another.

Anyway, it is now 7.15 in the morning and the sun has yet to make any impression. Time for a second coffee before I creak into gear. creak creak. Amazing what a second cup does.  This is destined to be a quiet day which I have assigned for recovery from the wonderful weekend we had. Quiet is relative of course.

I saw a lovely article in a paper about the Swedish car maker. “Marsupials vs. Volvo“… Volvo has gone down under to test its autonomous vehicles and has found that while their AI navigation systems can cope with most eventualities but bouncing kangaroos confuse the hell out of them “.  I sometimes think that I affect people like the marsupial affected the AI.  When I get inspired I leap around like a teenager and produce all sorts of florescent language, as the artist Sally found out yesterday (see previous). Poor dear, she was suffering from a bug and was unable to enjoy her own open show at her home.  The trouble is that if I suppress my spontaneous remarks I become frustrated and have a feeling of not ‘being me’. It is like trying to stop a spring of water by blocking the outlet with a towel.

Can’t be done, not with me anyway.

Today I visited my dentist in Bath for the 35th session of the treatment to reconstitute my teeth. 12 dentists have done their best over the years but there was no choice but to have a root and branch reformation, go private and stump up (pay up, fork out, shell out – your choice). David is meticulous and will not allow any work to go through without it being 10/10.  We get on well so I don’t mind. 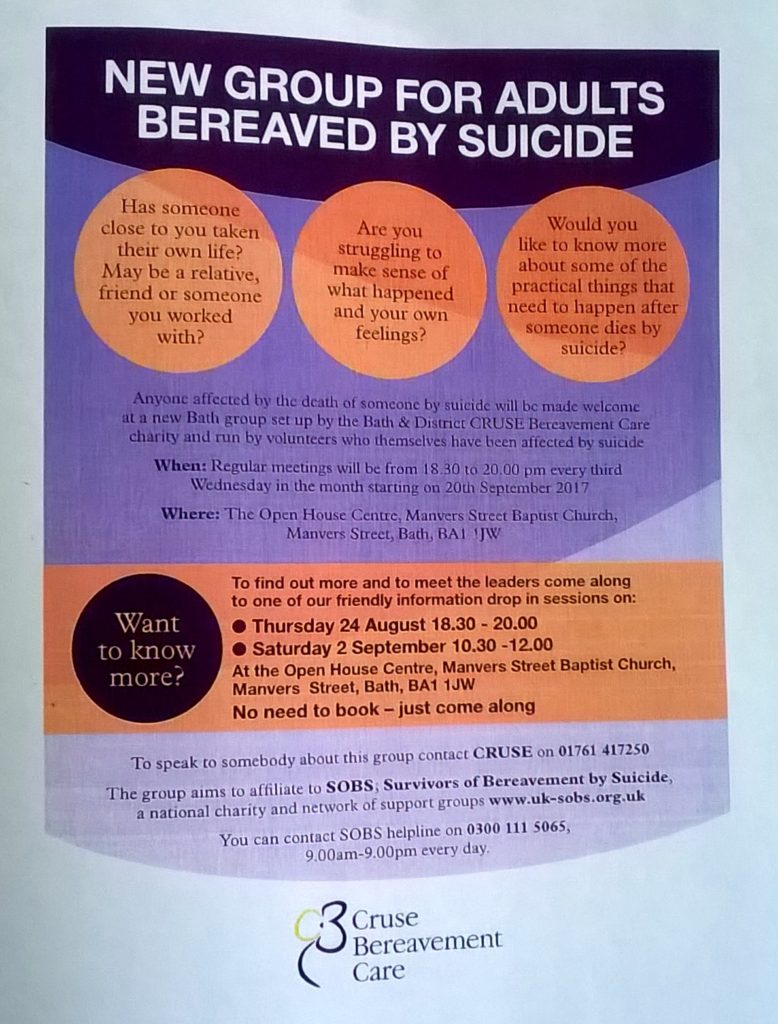 I went to pick up Francoise from her AgeUK centre volunteering work. I saw a leaflet on the wall which shows  trend of the times. I thought Cruse Bereavement Care was only for widows to recover from death of a loved one but now they are diversifying. I don’t like the acronym SOBS but it will do I suppose.