….My wife tells me the sad news of my Lady Castlemayne’s being now become so decayed, that one would not know her; at least far from a beauty, which I am sorry for…..

Jeremy Hunt the Health Secretary actually deigned to make an appearance on TV during which he spoke words. They were about the golden hello to encourage doctors to areas where there was more difficulty in recruiting. He was also speaking about nurses and their declining numbers.

This morning, on BBC1, one of the topics was loneliness. A GP and Chair was saying that she had not  been trained to do social work but rather practice medicine and that as people got more lonely so they became more demanding, increasing the pressure on an already overloaded GP service.

Tommy, a frequent visitor and spokes person spoke of his efforts to reach out to lonely people via his doctor. He said that when you close the curtains at 5pm, the world closes in on you and its a long time before the morning. He urges people to ‘join something’ and meet others in a similar situation. The problem is that if you have lost the will to live, this is very difficult. 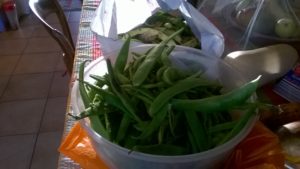 A few feet from the TV sit RUNNER BEANS. Do we a) eat them b) freeze them c) let them dry and use the beans within the beans d) throw them away e) give them to neighbours (again)

A neighbour from No.2 came to my front door, responding to my letter in the local paper about new black bins with which we have been issued. I wrote that since they could only be used for very limited items e.g. cat litter, dog poo, sanitary products etc most of us would have no need of it. My neighbour had previously tried to get the council to take it back and replace it with a bag, but they refused on the grounds that there was easy access to her bungalow. They were deaf to her protestations that her husband was disabled and that they could not get the bin through the garage without removing the car.
Right, this is war. If the council want to waste money on unwanted items and at the same time call for reductions then we have to do something. When I have the energy I shall call them up and say I don’t want it.  If they will not take back their own property then I shall take it to the recycle and tell them that that is what I am going to do.

Off to do admin and secretarial type tasks at the allotment. Today we have a delivery of horse manure of a very rich and ancient variety. Tenants pay £1 per barrow load which covers the cost of delivery by a local farmer. Primrose the local  garden contractors came to strimm the paths. There were about eight people working happily in the sun.

Off to the hospital for my monthly eye check. There now follow many images which comprise my alternative view of the world.  Digression:   One picture is worth a thousand words. 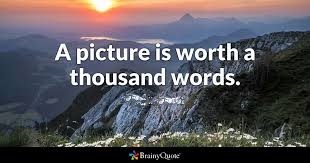 The original quote was actually
“A picture is worth ten thousand words” as opined by a Fred R Barnard, of the publication ‘Printers’ Ink’, 10th March 1927. It probably goes back to an ancient Chinese proverb. Chinese proverbs  can be found for most subjects . Variations include Napoleon’s “A good sketch is better than a long speech” or how about the Russian writer Ivan Turgenev, 1861 “The drawing shows me at one glance what might be spread over ten pages in a book”.

I never know what I am going to find on entering the hospital grounds. A perfectly functional car park has been torn up for some reason. There is an enormous churn of photographs, art works and art installations that adorn the corridors on all the floors. They are for sale, and the proceeds or part of them are used to fund hospital projects.

You can have a coffee in the main foyer but the queues are long and I don’t like coffee out of a machine so I wended my way to the Friends Coffee Shop, some way down one of the long corridors. It was worth the walk. ‘Friends’ have served in the hospital system since shortly after WW2. This one has been around since 1957, having been progressively modified and enlarged. I found it much more intimate and friendly than the big one in the foyer. It is where patients can be taken to talk with their families without being in a large area or having to suffer drafts. Volunteerism is quite a culture here.

Young Patients on the Children’s Ward have been working with Artist in Residence Edwina Bridgeman and have made both 2D and 3D work for large box frames based around the four seasons.

Private Lives in Public Spaces
Sophie White
“My sculptures are observations of human action and interaction. I am interested in capturing a moment that I find perhaps poignant or subtly humorous. I am particularly fascinated by people engrossed in their own world unaware of themselves and oblivious to the people around them.

My work is a direct and instinctive response to the life around me: observations of human behavior, reflecting comradeship, intimacy, vulnerability and different states of mind. The stance and gestures make up an important part of my work. The example above:  ‘Girl on Bike”

The hospital try to get the message across of health.

So, off to my appointment. There was no deterioration in my macular eye condition so fingers crossed we have some stability in the left eye.
This is the examination room (below).

This week is National Library Week and all libraries are putting on special events including a coordinated event for children this coming Saturday. We went along to the library at Midsomer Norton where the Mendip Stoytelling group were having an outreach evening. I believe we all have the need for stories built into us, probably from our mothers knee. All cultures have such a culture. 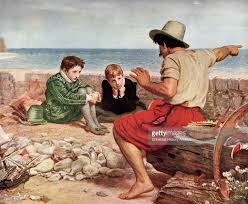 The group normally meets in Chewton Mendip Village Hall. We had two story tellers, Colin Emmett the organiser and Janet, one of the co-story tellers. The theme for tonight was trees. Janet had a reproduction plucked stringed Finnish instrument called a Kantele, which she used to illustrate her stories.

made in Shepton Mallet by someone who was inspired to encourage as many people as possible to ply a musical instrument. She told us two mythical stories.

She made the case from felt. It was too big so in  moment of inspiration she put it in the washing machine. It emerged t the end of the cycle having shrunk just enough to contain the instrument snugly.

Colin says he never tells a story the same way twice. Like good wine stories mature with the telling. The group do not have a website which is a pity. Here is Janet telling her stories. She has good contact with the audience. Colin does too but in a different way.

I put in a plug for the aforementioned tree exhibition in Bath and encouraged people to attend. It was here that I decided to have diary readings for people which would have a simple formula. Bring along your old diaries and keepsakes. Read from them or talk about your object. I shall start in the new year.

Home and watched TV, the last of the ‘Ambulance’ series on BBC1. A women of 29 had been killed during high winds – hurricane Doris – when a building block fell on her. More creative stuff tomorrow. I cant wait.

2 thoughts on “Loneliness is expensive – continual creativity at GUH Bath”