..(Lord’s day). Up and to church. At noon comes unexpected Mr. Fuller, the minister, and dines with me, and also I had invited Mr. Cooper with one I judge come from sea, and he and I spent the whole afternoon together, he teaching me some things in understanding of plates. ..

I admire Pepys’s public acknowledgement and lack of pride saying that he learned from someone else. I get the impression that in most cases once people have left school/university and reached a comfortable position in their job, learning for learning’s sake is of secondary concern. Learning is a thing of beauty. It refines your knowledge and understanding of our society and also our ability to communicate meaningfully with our fellow humans.

Pepys is also a very sociable creature. The minister would only turn up at his place for lunch if he was confident that it was his life style to receive guests under such conditions. I remember when I was young our family household was very conservative and my father would expect to receive notice in the form of a letter if someone wanted to visit. Times have certainly moved on, then backwards. Many teenagers spend more time on their own with their devices than going out and hanging out with friends. People will lose the ability to talk in full sentences before you know where you are.

This diary has a variety of purposes and one of them is to describe what life is like in S(pronounced z)omerset and what gives it it’s distinctive character. My plumber Robert was enthusing about the Congresbury Garden Centre so we thought ‘why not?’. It is not raining today anyway so a spin in the car would be a nice way of relaxing after the meeting last evening.  This will  be mostly a photo essay with comments at the end (scroll down) about what constitutes a good outlet and what to look out for in both senses of the word. Use Ctrl and + to increase the size of the 17 images.

This recently renovated centre is amongst the top quality in variety and sheer range of product.
* Right from the start, the impression is excellent and reminds me a bit of IKEA in the walk through.
* This has been designed for families with special entertainment for children
* The restaurant is a large c 200 seater with an adjacent area thoughtfully provided for those who want to eat their own sandwiches. I noticed the queues for ordering were long. You order and pay Wetherspoon style and the food is bought to your table.
* some of the prices are higher than I would expect but in the main you get what you pay for.
* There is by the way an excellent butchers section with very well dressed meat. There is also a pet and I think a fish area hence the need to explore. I was missing a map at the entrance. Obvious when you know the place but not if you are there for the first time.
* I admire the effort to communicate via chalk board and to bring the subject alive. People read written material more than printed (in my observation anyway) and this store is lucky to have someone with good writing.
* in the main areas the staff were difficult to spot. If you have a question and look around, you may be looking a long time. Items do not sell themselves and I get the feel that this is a vast show room too big for its own good. Could staff stations be made clear.
* there are offers going on which you need to spot e.g. off season sales for sheds
* come along and be prepared to spend most of the day there; you might include a visit to the restaurant. Avoid Saturdays if you don’t like crowds.
* at the very least you will get some ideas for what you really want but you will probably go away with an item you did not expect to purchase. There it was with your name on. ha ha, that’s as good an excuse as any.

Well done brave investors for putting millions in to this. I enjoyed the experience but felt a bit intimidated by the sheer size. Maybe that will diminish on my subsequent visits. Those around me were enjoying themselves and the buzz in the cafe was good.

Into Congresbury itself, a village little more than a T junction with a thousand or so inhabitants. In the entree is is a small square with a restaurant/bakery, fish and chip shop and one or two others. Fish and chips were good enough. We went to the bakery for coffee and cakes.

I was attracted to a leaflet on the table. Its a great idea to have a two aspect event – having a good breakfast Saturday morning and meeting people at a weekend which can  be lonely for those living on their own.

Londoners will not be aware of the Ticknell Country Store chain. It specializes in clothes for the outdoor country person, gardeners, DIY people and horse lovers.

On the way home we stopped at the Blagdon Water Garden store which I had never been to before having passed it scores of times. It is mainly for anything to do with water, garden ponds, fountains and they stock a very large variety of fish. We bought some goldfish to make up for those eaten by a heron or was it a kingfisher (we never saw them) who has our pond on his GPS and visits us once a year to feast where he can….<pantomine season coming ‘Oh no you don’t‘>  Not this coming period. We bought a net which now covers the whole pond and the said heron will get his feet well and truly caught. Mind you, these are clever creatures.
We released our six little goldfish and within minutes they were swimming with the existing inhabitants of the pond. We asked if their sex could be determined and were told that they can only be sexed in the spring. Males have small white spots (tubercles) on their gill shields and tend to be thinner than females. Males will chase females again in spring. So now you know. 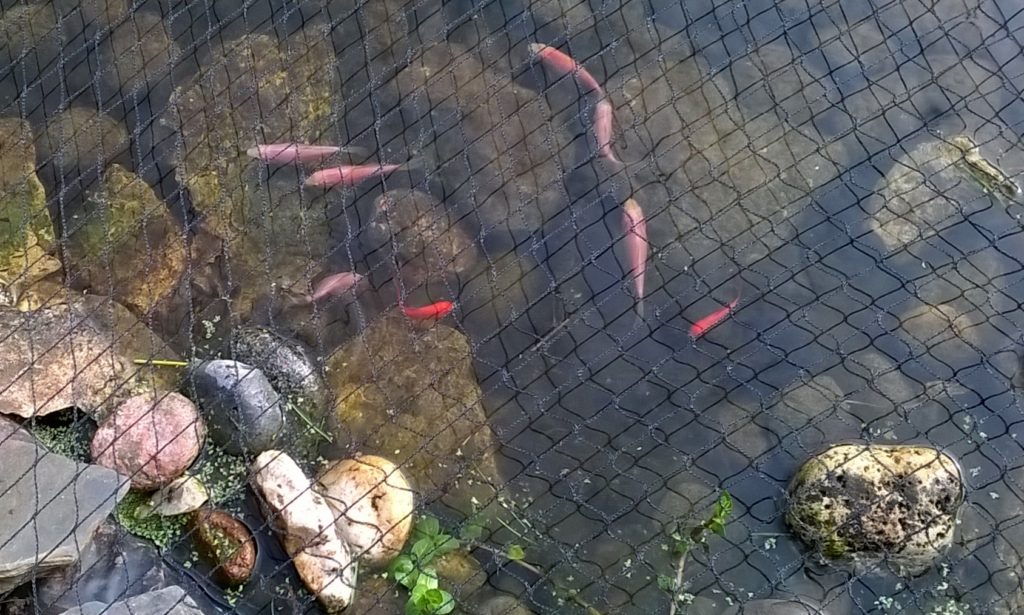 The little ‘uns integrated easily enough. They are not territorial.