…At noon to the ‘Change, and thence by appointment was met with Bagwell’s wife, and she followed me into Moorfields, and there into a drinking house, and all alone eat and drank together. I did there caress her, but though I did make some offer did not receive any compliance from her in what was bad, but very modestly she denied me, which I was glad to see and shall value her the better for it, and I hope never tempt her to any evil more…

That’s my girl. We have had a lot of ‘anti-men’ propaganda by that master of perception control, the BBC. I just luuurve the way women always blame the man for their own lack of control. If you don’t want sex you close your legs. No contest.  Womens’ thighs are among the strongest muscles in the body because of what they have to do giving birth etc.  Compared with that power the male organ can make no progress except with consent. You can’t open your legs without knowing it, ladies. Don’t blame the man when you are 50% responsible.

Amazing how conversations can start unexpectedly. I was waiting for the 41 Park and Ride at Odd Down. Two ladies were also waiting and I picked up what I thought was a South African accent.  It was actually Rhodesian and she had lived in Australia for 10 years. We all sat in the front seat on the top of the bus – a relic of when we were children and regarded it as the best seat. It turned out she was she was an agricultural specialist who worked in Rhodesia with farmers, lectured in many countries & well versed in agriculture. Talk soon turned to Monsanto. She was a mine of information about the wickedness of this company (previously referred to in the diaries by me) and in the 10 minute journey to town, words flew between three of us in a wonderful kindred spirit way. Her friend was not so clued up and promised that she would look into it. Adrenalin flowing, we wished each other a good evening as we left the bus. What a lovely start to our evening.

I am addicted to Film Festivals because we can see a genre of film that is not available even in arts cinemas. The London one is too big for me to cope with. You pass sleepwalking figures who have seen three or four films a day. There are I forget up to 200 films in the BFI London event whereas in the current filmbath.org.uk we have a mere 43 films over 11 days from which to choose. We chose 7 films. That meant laying out £140 but we were happy to do this to support the minority British film scene. We booked in very good time. So off we toddle to the Odeon, Bath where most of the films are being shown.

First up, ‘The Florida Project’.

The write up: “Sean Baker’s new film has been acclaimed as a surprising and original work of brilliance. With subject matter reminiscent of a Ken Loach drama – three children living below the poverty line in a grubby Florida motel run by Bobby (played excellently by Willem Dafoe) – and a healthy dose of American energy, this ‘shot of pure cinematic joy’ (Little White Lies) introduces us to three kids who are infused with excitement and belief in the limitless potential of their future lives. Baker’s previous film, Tangerine – screened at the festival in 2015 – was a minor sensation; his new one is a quantum leap forward.”

My comment: if this film was a quantum leap forward I dread to think what the previous film was like. I can cope with the F word so many times then it becomes offensive and monotonous. It was not a healthy dose of American energy but three feral children learning abuse and bad language from their dysfunctional mother. They were not infused with any potential. They went round causing chaos and damage. Willem Defoe was excellent but if I want to see other people lying and cheating I don’t have to go to a movie to do it. At 115 mins it was too long for my taste.

The film re enforced my loathing for all things American – the violence, the shallowness, the hypocrisy, the gap between rich and poor which is even greater than us in the UK. I had to leave the theatre about three times to get a breath of fresh air and found myself starting to get depressed or down hearted. After the film, a man sitting in the next seat said that the film should never even have been made. I sat outside and waited for Francoise to join me and we went for a walk up and down before going back into the same theatre to see the second offering. If you want to know what IMDB thought about it (the Bible of film criticism) then click here.

Number 2 film was “Ingrid Goes West”. The description “Ingrid Thorburn is an unhinged social media stalker with a history of confusing “likes” for meaningful relationships. Taylor Sloane is an Instagram-famous “influencer” whose perfectly curated, boho-chic lifestyle becomes Ingrid’s latest obsession. When Ingrid moves to LA and manages to insinuate herself into the social media star’s life, their relationship quickly goes from #BFF to #WTF.

Now this was a lot of fun. This is a world ruled by Instagram. For me it was a warning not to lie or fantasize since one stage can lead to another on a slippery slope. At 98 minutes it was just right. The director was also the editor which explains the sharp cutting.

The actors were very well chosen and were really believable. For this reason I found myself glued to my seat so to speak. The story line drew me forwards. IMDB scored slightly lower than the above film . Goodness knows why as I found it superior in every way.

The Florida Project was described as a ‘gritty’ film. In my experience that normally means people behaving very badly. IMDB review and description of Ingrid Goes West is here.

The enlightening effect of the second film cancelled out the disappointment of the first. If you have never been to a film festival then take heart. It is fun. Everyone who comes becomes instant members of a social club. It is the  done thing – yes even for English people – to talk with anyone else and compare views.  All have a love of film so there are no class or age barriers.

Two down, six films to go.

On the way out, a glance at what is possibly the most fat inducing and unhealthy sweet counter ever. Which company conned their way on to poisoning young children in such a fashion.  No wonder there are so many overweight children who have to have their teeth removed.

And finally, another nudge towards trans-humanism. It’s coming folks. 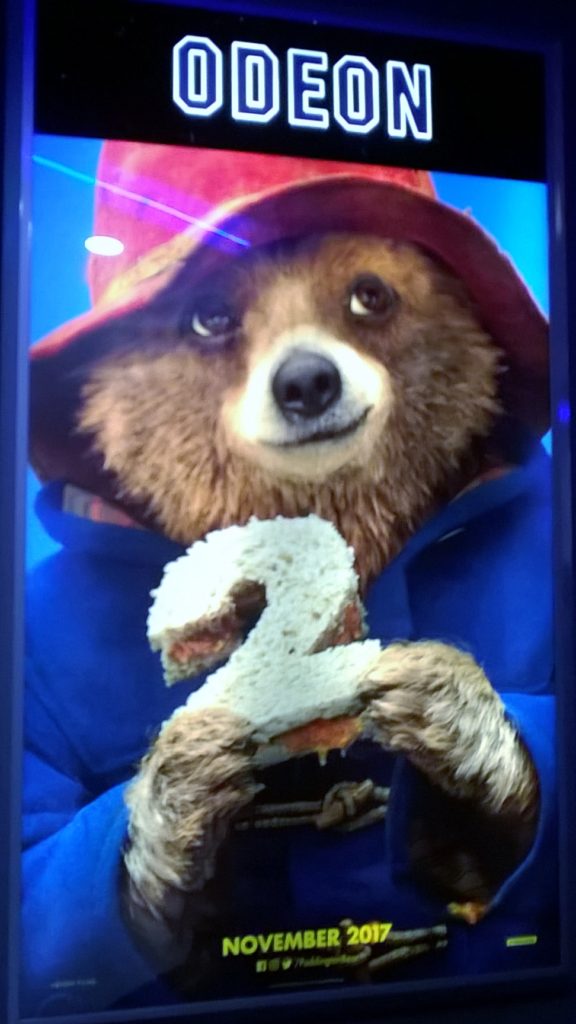