Up, and not finding my things ready, I was so angry with Besse as to bid my wife for good and all to bid her provide herself a place, for though she be very good-natured, she hath no care nor memory of her business at all.

Such a minor thing as staff training was not part of Pepys management style. You were either up to the mark or for whatever reason not up to it in which case you would be dismissed. No allowances were made for anything save death. At least they knew if not before then certainly after being sacked.

I was quite subdued by the new from my web master that .jpeg files (images) can contain viruses.  I found an innocuous looking quotation on google and copied it over. On loading it on to the page I was unable to instruct the paragraph breaks by hitting return twice. How ever many times I hit return the whole mass of text remained as one paragraph.  If you search on google you will find the code, dubbed IMAJS. The techniques itself is called ‘Steganography’ which places the code inside the pixels of an image, hiding malware in plain sight to infect target victims.  After all, images are a lot of zeros and ones 0010010101010101110010101 could be hidden javascript , separate from the colour information.

“Twas brillig, and the slithy toves
Did gyre and gimble in the wabe:
All mimsy were the borogoves,
And the mome raths outgrabe.

“Beware the Jabberwock, my son!
The jaws that bite, the claws that catch!
Beware the Jubjub bird, and shun
The frumious Bandersnatch!”

Lewis Carroll, from Through the Looking Glass and What Alice Found there, 1872

Anyway, enough of the gay banter.  This morning, our Midsomer Norton mens’ group. In spite of great efforts by the organiser, the membership remains static as it was before it received a make over. This is sad but there are seldom more than a dozen of us and the occasional visitor comes and goes. Why? We are very much a niche group. Midsomer Norton is not a cradle of expressive men never mind Church of England or Methodist men. It is not ‘the thing’ for ex coal miners to come out with actual spiritual views. Now, Bath or Wells or Bristol is a different matter but I am sure that here, the spirit of coal mining lives on.

Growth has to be by word of mouth. You can spend vast amounts on advertising on a PR campaign but there is no guarantee that the curious will feel part of the existing group. This is one thing that Americans are very good at – welcoming people.

This morning’s talk was by a man who five years ago came back from working in Singapore with his Singaporean wife and now lives in Peasedown. He loves that country and I have invited him and his wife to coffee. People in this area do not ‘do’ dinner parties and would think you were very forward if you made an offer. Dinner would be for family members and relatives only.

The talk was on being a Street Pastor. They go out late at night Saturdays – their insurance mandates going in groups of three people – and engage troubled and violent youngsters to try and defuse situations that could turn nasty and require police attendance.  Although Christian, they do not evangelize but talk to people in a human way (remember the term?). If they are asked specific questions about a faith they will happily respond.   In the background they have a prayer group in the Town Hall who pray continually for them whilst they go about their work.

They have their own website; the idea was pioneered in London in 2003 by Les Isaac. Since then they have trained over 12,000 volunteers from local churches who play an active part in strengthening community life and working for safer streets. Our particular group was formed in 2013 with widespread cooperation from the local churches of all denominations. the images are very posed and I do not find them particularly helpful but the work goes on, week in and week out. An unglamorous job but some are led to it.

To Camerton where there was a Craft Fayre. I bought a knitted cup warmer for £1. Cakes if available are always good value for some reason (clue for those intending to move to Somerset). We were in and out in 10 minutes and went for coffee to the nearby Meadgate Farm Shop. I used to write for Trip Advisor but I can say it is an excellent place with a very good brand of coffee and the odd light meal. Oh, and they do breakfasts also.

Home and now camping in due to another weather front from the Atlantic. We are both quite happy to sit in our respective offices and watch videos. Francoise spends some time painting at which she is getting very good; I writing these diaries and doing various bits of research. 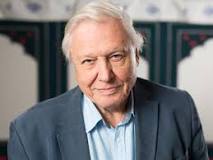 One of the things that the BBC does very well is nature programmes. I think we are one of,  if not the leading masters of nature photography aided by the one and only David Attenborough who at a mere 91 years of age is one of the most traveled people on the planet.

The picture below is from a BBC2 production about the vast plains of Brazil and how hey change with the seasons – monsoon then – apres le deluge – the dry season with wildfires etc. The film crews must be vetted most carefully for temperament and I notice they choose the cream of the cream. You have to be an expert in your field even before being considered. The BBC can take their pick of technicians as their reputation is so high.