On a miserable,  cold and rainy day why bother to sit on the 376 bus to Bristol? Two very good reasons. I seem to have quite a good, in fact very good, inner guidance system. When I read about films, plays, places to go, the right item jumps out at me and I know I have to comply. Well, perhaps ‘comply’ is too strong a word. Let us say I’m strongly attracted to going to the event concerned. 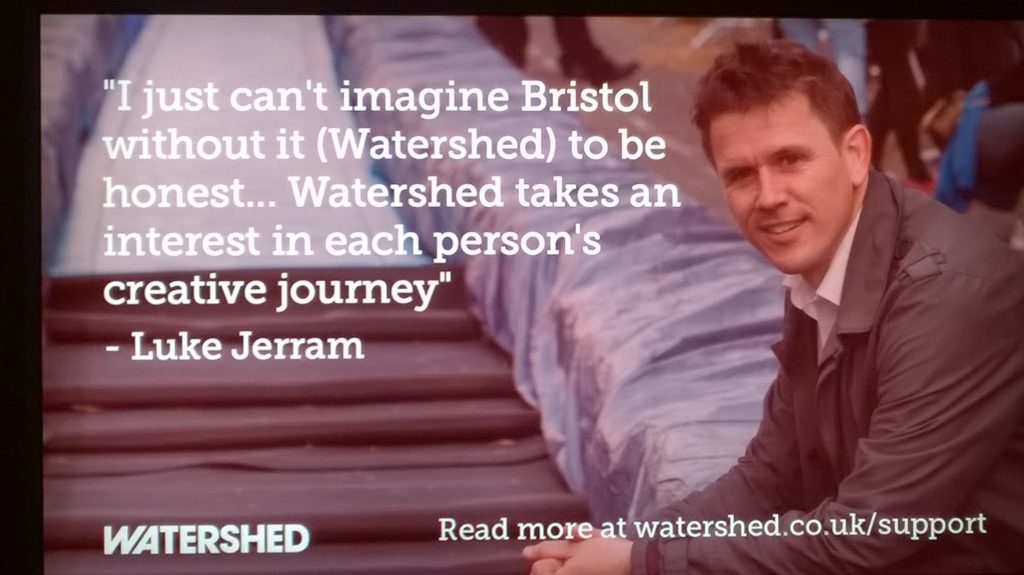 The Watershed cinema and social centre strives and succeeds to be a lively coffee bar with meals and a three cinema centre showing arty films. When I enter, I feel like I am back in London

The first film started at the Watershed at 12:30 PM Paddington 2 is about Paddington Bear, his involvement in wanting a magical book for his aunt, his wrongful arrest and imprisonment for its theft instead of the true thief, the dastardly Hugh Grant. I cannot remember the last time when I saw such a delightful film, full of innocence, a reminder of positive family values, photogenic people and a ‘goody versus baddie’ story line. 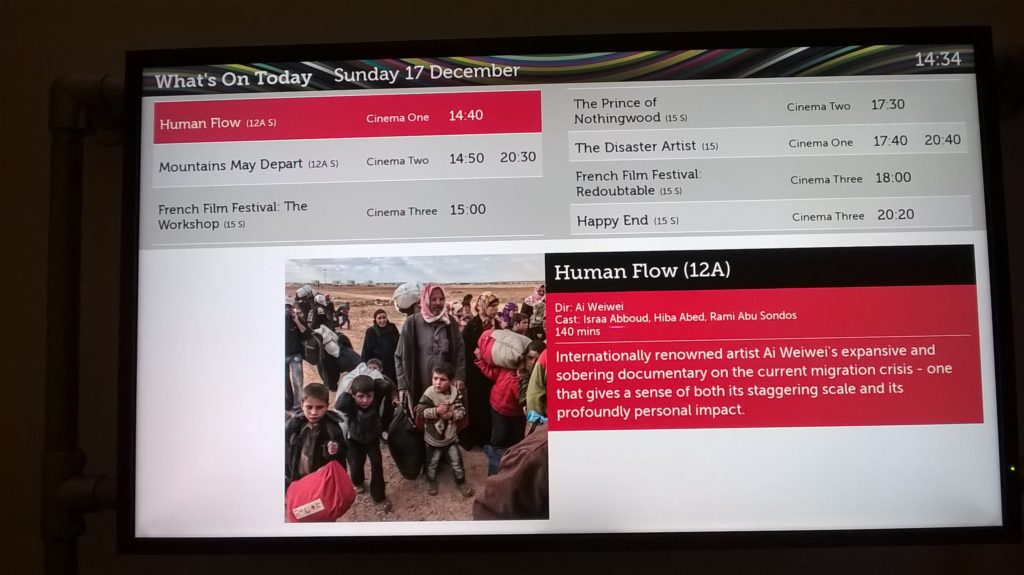 We emerged from the first film at 2:30 PM with just enough time to go to the toilet and to grab a snack and then back again at 2:40 PM to see Human Flow directed by Ai Weiwei.  What a delightful and humble man to be with people in a refugee camp situation listening to them and comforting them and even bringing a sick bucket for one unfortunate lady who was overcome with worry. His attitude was a little bit like Michael Eavis of Glastonbury fame. The world refugee statistics are truly shocking. The number of people who had died in transit, the fact that 40 million people had been displaced in Iraqi and the fact that every day, 34,000 people find it necessary to become refugees due to difficult circumstances at home.

Some of the most spectacular photographic shots were from drones. We looked down upon acre upon acre of encampments where people have to survive in the heat, the rain, or the wind. Reviewers at the Venice film Festival gave it four stars out of five. I don’t know what you’d have to do to get a five-star. there was a good review in the Guardian

As we left the cinema in the dark and the drizzle back to the bus station I reflected how hugely lucky we are. I cannot imagine what it is like to lose your house, your wife, all your money, all your possessions, and finally be kicked out of your country or feel obliged to move. He would be without any prop, almost any form of identity, unrecognised by anyone except those of you who you knew before.

It is almost a daily occurrence that I come across new websites supporting the alternative media. There is no question that the landscape is changing and the main stream media is losing its grasp. Today’s discovery was a video channel called Londonreal.TV I think it is or seems to be religiously based, no problem with that. It’s run by a chap called Brian Rose who appears to have a 100 year plan. No one can accuse him of lack of ambition. He was introducing a doctor who believed that all addictions were due to a desire to heal trauma from childhood. I will have to watch two or three more interviews before being convinced but I do like the immediacy of the videos and the liveliness of the site.

The wonderful thing about the Internet is that anyone can put on anything they would like others to see and so far anyway we have a fair degree of freedom except when we actually dare to speak the truth about the nature of the Dark Government of for example USA. In which case the ‘controlled by CIA’ Youtube will demonetise or otherwise censor the contribution.

Yesterday, I made the decision to withdraw from everyday things as much as I could until after the New Year. This is a great time of year to do nothing because no one expects you to be at the end of the phone and you can in effect bunk off and be very lazy without anyone knowing. My work ethic is such that even at the age of 73 I feel I ought to be making a difference, doing something, understanding something, learning something for the first time, making a breakthrough, helping a friend. I do not feel duty-bound it is just that I enjoy the whole process.

Mo Farrah was just elected to be sports personality of the year. He was at home at the time with this rather active child. When the presenter tried to interview him the child was making so much noise that he could not hear what was being said, and then the screen went blank. Maybe someone pulled the plug. Anyway, other people took over and the moment passed without too much embarrassment