The inspiration for today’s theme came when I was returning from the paper shop and an older lady who was standing in a driveway started to move forward. There was no way that she would have impeded me or caused any inconvenience but she was impelled to say “sorry”.  the implication of the word is that you are telling someone that you’re sorry for the hurt caused even if you did not do it on purpose. I wonder if this is part of the cult of Political Correctness when we almost have to apologize for our existence or apologize for any difference in opinion with others in case we offend them. 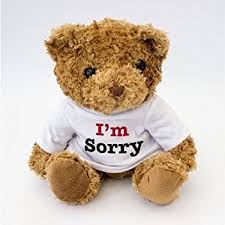 A recent survey of more than 1000 Brits found that the average person says sorry around eight times a day – and that one person in eight apologise up to 20 times a day. What gets me is that people apologize for something else someone has done to them. Example, if someone bumps into me and for some unknown reason I am prompted to apologize for someone else’s incursion. A social anthropologist Kate Fox describes experiments in which she deliberately bumped into hundreds of people in towns and cities across England. She found that around 80% of English victims said sorry even though the collisions were clearly Fox’s fault.

In some cases, people have such low self-esteem that they always assume that other people have greater rights than them when in fact we always have to accommodate ourselves to the needs of others especially when we are living in crowded circumstances. In such situations for example in a crowded kitchen I say as a joke “let’s apologize once and get it over with. We’re not banging into people deliberately”

On the topic of conversation we should not apologize for ‘rambling on’ because so-called rambling is a part of figuring out what we really think, and if the words come out in the wrong order then so be it. The listener gets the idea (that is what the brain is for – geddit) and a useful result of the conversation would have been achieved. The effect of conversation is so easily undone by apologizing for it. It is as if you didn’t believe in what you said enough for it to stand on its own two feet. It is almost as bad as the dreadful habit of saying “sort of” in every other sentence.

The word sorry is much easier to say than the more considered “regret”. I very much regret the effect my actions had on the family, the government, a country. Regret implies remorse. Regret is also used in formal statements “I very much regret to have to tell you that your relative is  deceased, missing in action”. the origins of the word can be traced to the old English ‘sarig’ meaning”distressed, grieved all full of sorrow” but as we have implied most people use the words more casually.

If I want to know something for example how to get directions in a strange city I should not start by saying sorry but by saying ‘excuse me’. This seems a polite way of getting someone’s attention without demeaning yourself.  I really do draw the line about apologizing for rain or other circumstances beyond their control. However, this could engender sympathy for negative circumstances by expressing empathy for something outside everyone’s control. an apology is seldom an admission of liability however and may well increase a person’s trust. Anything is better than not apologizing at all. In the case of serious misdemeanors, you may have to repeat your apology and embellish it somewhat.

This brings me back to the original reason for writing this article, the older lady who wanted to cross my path. The remark was not intended personally, just a tendency of her generation not wanting to trouble anyone for any reason. In the case in point I said nothing and went on my way. Hopefully, her day was not spoilt.