Although I love gardening dearly, it was very nice to have a break. I’m now prompted to start a job that was not particularly urgent as our current account has inconveniently hopped into the minus. This has nothing to do with the fact that I spent significantly more than I normally do over Christmas but all things pass.

I miscalculated the quotation for my famous hedge cutting job – an 84 m length of disheveled hedge – by quite a substantial margin. My problem is that I want to please people and give good value for money but sometimes I go over the top in my enthusiasm and I did so on this occasion.  I had to go in and tell the customer that the original quote I gave was unrealistically low. She listened to what I had to say and had the decency to comment that my quote had seemed a little bit low.  I told her what I thought it would cost and said that because it was my fault I would happily donate the time I had already spent and she would therefore be free to find someone that could do it for a better price.

Before seeing her, I stopped a chap who was driving down the street, and gardening maintenance person, and asked him if he wanted to quote for the job. He said that he knew some farmers who could bring along hedge cutting instruments and could do the job in a couple of hours. I offered this to the client as an alternative but she said no, the quality of the work done by the machines was not good enough in that the branches were shredded and she would much prefer manual work the like of which we were doing.

So, I gave her the offer that we would walk away and not charge for work we have done or she could accept quite a substantial uplift in the price. She chose the latter. The worst thing you can do is to surprise a customer at the last moment by a big overcharge and I think that is very unfair. The best thing tradesman can do is to come up front and tell the customer the way things are before spending the time and energy on the work.

I notice from the press that children coming on to secondary school find it a considerable shock to be faced by so many demands on social media. They feel they need to establish themselves by showing how brilliant they are, and how many “friends” they have and how many times they have been ‘liked’. I hope I don’t have to go into this but I find this state of mind the least conducive to learning how to form relationships when you become an adult. On the technical side, the mobile phone which everyone above the age of five seems to have these days is a receiving device but also a transmitter. It must inform the base station where it is and the worse the signal a more it has to work hard to reach the station. The wavelengths used by the phone company are the same as the wavelengths used in the human brain and every minute or so the phone gives a blast of electromagnetic radiation to say hello to its base station.

Not only does the brain heat up by 1° after even 20 min being held close to the ear but electromagnetic effects which in the long-term are carcinogenic particularly affect the very young child. The cancer will take at least a decade to appear in most cases but the chances are much higher amongst the population that is in close proximity to the devices. Research is available aplenty on the Internet. If you want an introduction to the subject, type in ‘electric sense’ and Lloyd Burrell” for a down-to-earth discussion on this effect. I admire David Dees for the reproduction below, an acerbic cartoon highlighting this slow motion killing machine. 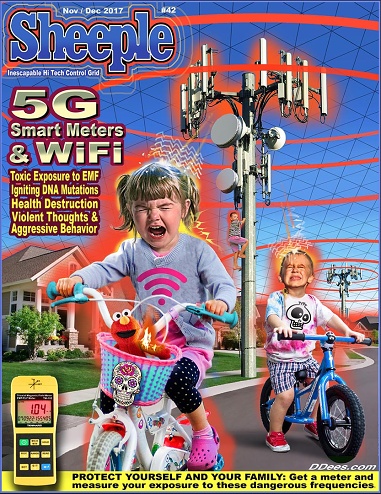 You will not want to know that frequencies from 5G and 4G masts can actually affect the wavelengths of the brain and cause us to feel certain emotions such as fear or anger. Compared with this technology which is springing up all over America and also UK, atomic bombs are primitive, untidy and unnecessary  wipe out of a population when you can modify their brainwaves to become fear filled slaves.