You are going to join us on our exciting journey to Londinium (the old name for London), the place where I spent 50 years of my life. We now visit it two or three times a year. since we have no free places to stay now I decided to use booking.com and see what I could find. I simply wasn’t going to pay £100+  a night upwards which would stress my budget so I thought I’d have a look at the much less fashionable areas of this fine multilingual international city which keeps on inventing itself, and is the source of endless entertainment and stimulus.

We always start our journeys whether to various parts of the world or locally at the Methodist Centre in the middle of Bath where we have coffee and cake. We normally take the 11:15 AM National express bus to Victoria for the grand sum of five pounds per single journey per person. If I wanted to go by train that would be 10 times the amount but since I see no point in wasting money, the bus it is. To anyone who is either snobby or paranoid about buses, the service is safe, on-time, comfortable, and not too long. I did once take a bus to Prague with an overall elapsed time of 24 hours and I must admit that was a bit much but three hours to London is nothing. let’s face it, a coach is not made for sleeping but sleep comes fitfully and you can go into a trance state so just think of all the money you are saving going by coach.

We arrived at about 2.15 pm after a lovely event free journey on the motorway with blue sky and sunshine and walked without cases rattling along the street to Tate Britain. When I was working many years ago for the National Coal Board on the Albert embankment I used to sneak over to the Tate Gallery every lunchtime and admire the latest works. There must have been about 50 years ago. The Tate can only show a fraction of its work so it’s lovely to go along knowing that you will always be surprised.

The notes say: many of the objects in this carefully contrived still life refer to the art of painting: the head of a lay figure – used in place of the model in the studio – for instance. In keeping with tradition of the still – life genre, other items evoke the in permanence of life, such as the urn or the white carnation flowers. Visual rhyming between eclectic objects alongside Frampton’s precise draughtsmanship and smooth brushwork all lend the work an enigmatic, surrealist quality.

The notes read: in the 1930s Brocklehurst became a sought-after portrait painter. Painting such as this represented a fashionable assimilation of past and present, a modern expression of traditional artistic value. Combining rich decoration with subtle assessment of character, brokers specialise in painting rich, famous and often highly independent within. This is a portrait of the socialite Margaret Sweeney, Duchess of Argyll.

I’m fascinated by how much nobility and other qualities can be best viewed in the face. They say that the eyes are the windows of the soul but what about the face I don’t think that comes a bad second. 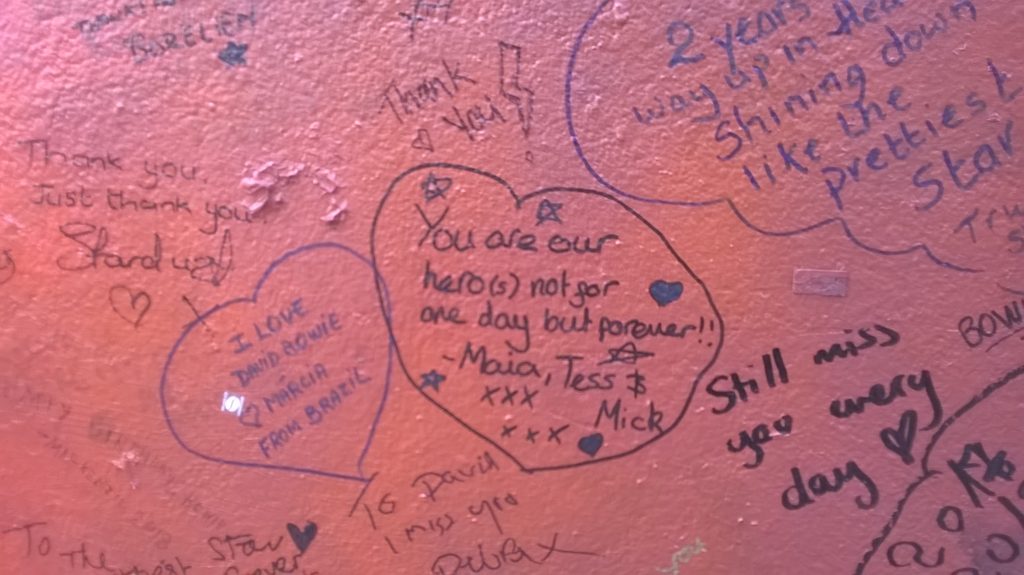 I took the tube (subway) to my favourite cosmopolitan place, Brixton. for some reason I was very attracted to the Memorial Wall for the late great David Bowie followed by a walk round the ever fascinating ever-changing Brixton market with its multitude of restaurants, pop-up and otherwise, representing countries which never even heard of.

So at this juncture it was getting dark so we decided to go and check into our booked hotel in Thornton Heath. The nice thing about Booking.com is that you can change your mind at any time and if you don’t turn up at all you only pay the first night which in my view is there enough. Many parts of London have become a minority areas as far as white English people are concerned; as an example the area around Thornton Heath station is completely different in character, more about that anon.

We arrived at our hotel to find a room I would say about 6′ x 9′ which allowed us room for the bed and a small area for laying your clothes. There were no actual hangers or draws but there was a separate bathroom and shower which did not work. The room was clean, the mattress just right, the pillows perfect and the whole was very quiet so we slept very well. Anyway we survived the first night and wondered what we had landed ourselves in. The only plus point at this stage was that it was £140 for four nights. Those of you that know London prices will realise that this is cheap indeed. Was it worth it, and would do it again. Read on for the next dramatic installment.