An interesting morning with my men’s group. There were about 18 of us, pretty good for such a damp morning at 8 am. The speaker wanted to give testimony about his coming to Jesus arising from an event that happened two years ago. He had originally given his life to Christ at the age of 20 and now he’s 55. He said that the Holy Spirit spoke to him and asked him to take a greater lead among the men in the church that he has attended for the past 25 years in Bath. This was after a certain cataclysm in the church when the vicar was having a relationship with one of the female members of the congregation and many people left including the disgraced vicar.

His testimony also included something that came up in his private life when he tended to download items from the Internet of which he was not particularly proud. He was almost hyperventilating when he said these words or made this confession. I knew it was very important and cathartic. When I asked him how he felt in the true BBC fashion he told me “sweaty”. I pressed him more and said that he saw a lot of people in the audience smiling. Unusually, his 20 minute talk which could have easily lasted for a day received spontaneous applause at the end. It requires great courage to admit something, a so-called weakness, in front of other people who know you. 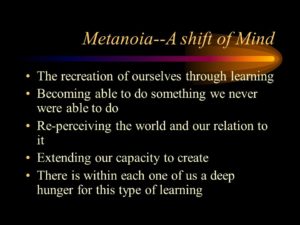 My visceral and strong reaction in front of the other men at the end of the talk was to say that the great leaders including Jesus came for sinners. I don’t find the word sin particularly helpful so let us say ‘ignorance’. I also said that the apostles of Jesus were a pretty motley crew so he should relax and stop beating himself up for this. I wanted to say that we have all done things that we are ashamed of but it is part of trying to figure out our own desires and satisfactions and deal with the instincts that we all have hot-wired into us.

If an instinct is not allowed to express itself in one way, it will express itself in another. What he needed is repentance or as it is better stated metanoia which is “changing one’s way of life resulting from penitence or spiritual conversion” or we can say a change of heart. I do not find the Catholic tendency to feel guilty, or the concept of original sin, to be particularly helpful. It may well be true in essence but it’s the way that it is addressed that needs to be delicately positioned.

I advised the speaker to take some rest because he really had exerted himself and appeared naked before us. Among the other comments were from someone who said that we don’t need speakers from elsewhere, we have enough talent within our group. The group coordinator asked everyone to let us know if we wanted to say anything. He also suggested that we think carefully about spreading the idea of men’s groups in our own church.

I also think there is a place for humour. I like the quote “always find a reason to laugh. It may not add years to your life but it will surely add life to your years”

So, to sum up, there is a testimony and there is a confession. The testimony can be a positive statement even though it covers ground which some might consider unfortunate. Us English tend to bottle things up too much. This means that we get prickly and will launch out at people at the slightest provocation. In computer terms, it means that we tie up our RAM, so the mind cannot work properly. This kind of years and years so that is why sharing and giving testimony is such a good idea.