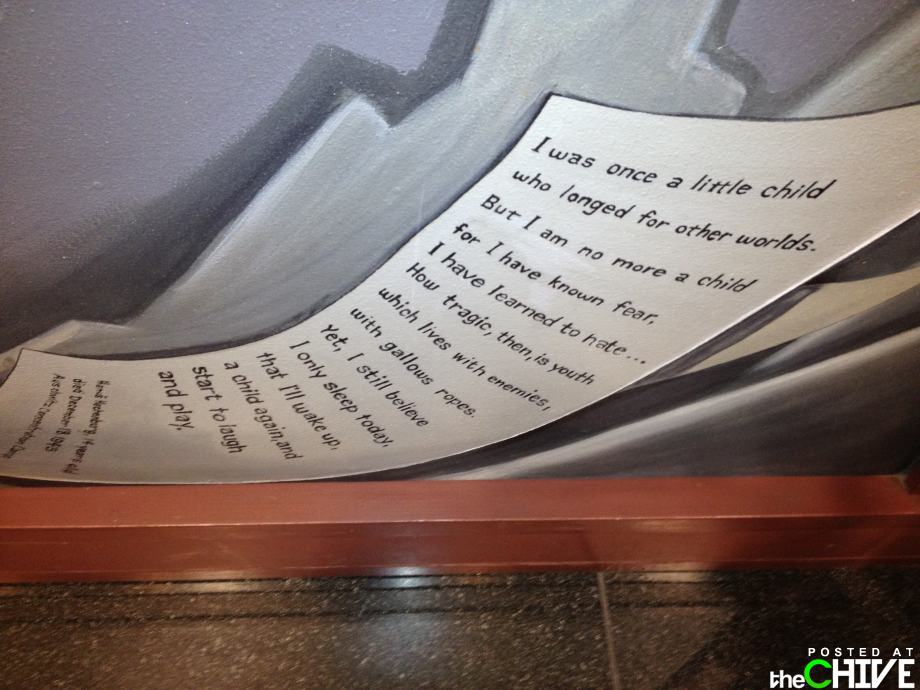 This is from the new Denver Colorado airport, for those of you didn’t know it is absolutely full of  symbolism.  The whole airport and its construction is rather strange. No one knows who funded it. There was a perfectly serviceable airport, Stapleton,  6 miles away so there was no need for it and yet it is both vast and vastly expensive. See the link above for further information.

My attention was drawn to one of the massive works reproduced above. I’m not sure whether all the words can be read using portable devices so I will write it down again here.

I was once a little child
who longed for other worlds
But I am no more a child
for I have known fear.
I have learned to hate…
How tragic, then, is youth
which lives with enemies,
with gallows ropes.
yet, I still believe
I only sleep today,
that I’ll wake up,
a child again, and
start to laugh
and play.

I find this an incredibly sad but accurate piece. Not every little child longs for other worlds because I think those who are loved and secure with their parents would be quite happy where they are. I do resonate with the third and fourth lines – when we know fear and lost innocence we have moved on. I feel very sad for children in war zones, children or five or six, to learn to survive amidst the rubble of buildings and the sound of bombs going off. David Icke and many others think we live in a computer-generated reality. The vast majority of solid objects is actually space and that includes us with our human body vehicle.

I wonder how many people have wanted to escape to a better place but on reflection this could produce more psychoses than rewards. Meanwhile, we have the benefit of the words the wisdom from not only the leaders of the various religions but wise people through the ages. Julian of Norwich for example a favorite of my mother or GK Chesterton or CS Lewis. I believe that  this particular state called physical life is actually Purgatory, a staging post between heaven and hell. By heaven I mean that our spirit is unrestricted and by hell I mean that we are caught in a time warp and we have to face the results of our own actions. Can Jesus save us from our sins. This is all too convenient for my liking. Jesus can show us the way of living which will deliver us into freedom of spirit and thus able to live on this very imperfect planet. 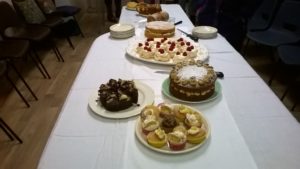 Off this morning to a special coffee morning at church, indeed it proved to be. This was a special fundraising occasion for the organ, and many good ladies had spent their time making cakes, a selection which I show in this picture. If you have just had your breakfast, a sugar bomb is not what you need but I have to sample cakes for the sake of politeness.

I was glad to see one or two people who have not been to the coffee mornings before and I encouraged one of them, a lady sitting expectantly next to me, that we were a friendly crowd and it was worth coming regularly. I said she would get to know the names after a time.
I talked to one of the regulars, Don, who at the age of 85 had survived two wives last of whom passed two years prior. He is very lucky because his supportive and loving family live in the locality. His son and daughter-in-law bought him a model train set which he enjoys adding to from time to time. He spoke at length about driving. He still drives a car and goes to Weston-super-Mare, Portishead and so on but says he lacks confidence. He thinks he could change a tyre if necessary ( I doubt it myself). I said that his so-called lack of confidence was probably an instinct to look after himself and it was quite natural at the age of 85 to be a little bit concerned about your physical strength. He said with great pride that he does what he wants to do when he wants to do it.

I talked to someone else about gardens. We discussed how effective human urine is in keeping rats away. Evidently female urine doesn’t do it: it has to be male urine so come on chaps do your bit for the garden.  He talked about the love of deer for roses and felt sorry for his neighbour because both their properties  abut onto  fields and he reckons the deer sneak into the gardens about three o’clock in the morning for their meal.  We discussed which vegetables grow well and we agreed that runner beans didn’t know where to stop and we get flooded with them before we know where we are. He says he brings them along to church for people to take.

The point is, that when a number of people are together in a spirit of goodwill, you always get interesting conversations, gossip, exchange of opinions and someone and you can never tell from looking somewhat whether they have an interesting or relevant story to tell.

The next conversation was about a local restaurant which is on the way to Wells. It’s called the Cheese Yard Cafe and is in West Horrington. There is evidently a great OAP two course special menu for £9.95 on a Tuesday. Me being true to form decided to take my wife off straight away and have a look. <pause while we actually go>. This restaurant, in an unpretentious side road next to a farm which is in itself on a side road has got it spot on right.

The price point is somewhat less than £10 for a main meal and for this you get a very generous amount of home-cooked food for which you have to wait but do not complain. Everything is made freshly to order.  My wife had a vegetable curry which was more than adequate and I had a roast beef meal which filled the whole plate so much that the vegetables came separately plus there was a bonus of cauliflower with cheese sauce. I had bread-and-butter pudding with a strawberry which melted in the mouth and my wife had a piece of chocolate cake without gluten that was so decadent she could not finish it. The waitresses were very friendly and the manager genuinely interested in people. I understand it has only been open for little over a year. They don’t need to advertise because of word-of-mouth. If you are near Wells, set your GPS to  BA5 3EB and off you go. I’m given to understand that it is always crowded. I’m not surprised. Parking is easy. 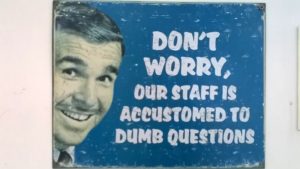 Amidst flurries of snow off we went to the Rocky Mountain Nurseries to get some seed potatoes. We chose an early, a later early, and a main crop. Those that are near retirement age just to remind you, you can look forward to being able to do what you do when you feel like doing it. When someone recommends something, I do it straight away because I believe the timing is involved to a much greater extent than we imagine. The right idea at the right time has a much bigger effect than the right idea at the wrong time.

The two most important requirements for major success are first, being in the right place at the right time, and second, doing something about it.
Ray Kroc”   From Brainy Quotes.

I read a little more on the Internet about the disastrous effects of treating people with psychiatric drugs. A point I had not realised is that it is just as dangerous to come off the drugs Pentagon in the first place and coming should only be done under medical supervision. Antidepressants can have the following symptoms; anxiety, agitation, panic attacks, insomnia, irritability, hostility, aggressiveness, impulsivity, hypomania and mania. One of America’s leading psychiatrists who acts as an expert witness in cases involving drugs says that shooting incidents in American schools will continue so long as the problem of drugs is not addressed.

Some of you may remember Sandy Hook, 2012 and the purported killer, Adam Lanza. He had been under psychiatric treatment. An assistant attorney general for the state of Connecticut stated that the list of Lanza’s medications would not be disclosed, because that “can cause a lot of people to stop taking their medication”. It is obviously better for patients to keep taking those drugs and then some of them will go off at the expense of innocent persons.  So there we are, transparency at its best. I just heard that the police and the medics were not allowed in to the recent school shooting in Broward County leaving the children to bleed to death, and also all communications were cut for a time. Nothing suspicious there then