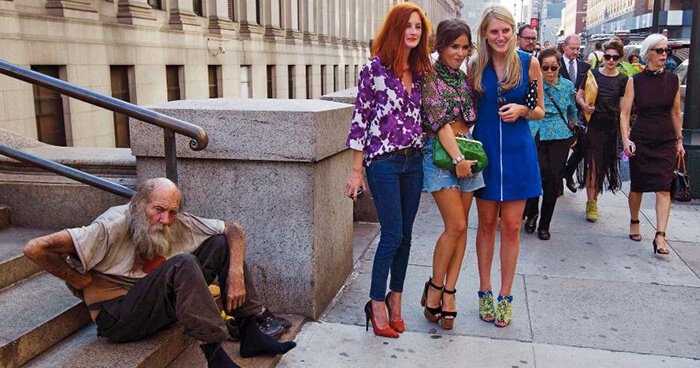 So far as these three fashionable young ladies are concerned, the man sitting on the steps does not exist. If you had told them that there was someone sitting on their right they could not have described him. Even if they had looked directly at him, they would not have seen him. However, the picture is deceptive. These three young ladies may live in worlds of their own. It would be most unlikely if they were identical in their thinking, their aims and their ambitions although in this picture they are united by their desire to impress.

It is questionable whether there are any two people on this planet who have the same goals for the same reason within the same timescale in the same culture. To benefit from the richness of human beings around us, we need to broaden our vision or not allow it to become constricted. I am not impressed when I hear that someone is single-minded, that sounds very left brain to me. I am impressed when I hear someone is focused. Looking at the man to the left, we see his condition as it is now or think we can see it. We do not know his history and what he has contributed to his fellow men. See my previous comment on homeless people.

In order to have a wide field of view, we need to be free from all insecurity. Other people have a horrible habit of mirroring what we are trying to avoid facing in ourselves and the more that there is, the less likely we are to view people from a neutral point of view and learn how to interact with them to the benefit of both parties.

Last night, I watched a film on people being interviewed for jobs. It was quite amazing how some candidates did not do research into the firm that they were joining, in this case Hilton hotels because if you want to the associated with an industry in any way you have to show beforehand that you are familiar with its workings. Each interviewee was asked to say what the initials H I L T O N  meant, with regard to the company mission statement. The answer was H for hospitality, I for integrity, L for leadership T for teamwork O for ownership and N for now.  The person who got the job was the person who named all six. If candidates are not prepared to do their homework then why do they bother turning up because they will be spotted in 5 minutes. This is a competitive age and the company is reputable so they can afford  to choose.

The other interview was for a design position in a women’s wear company. Again the lady who got the job as junior designer had taken the trouble to study the company and she also prepared a portfolio of designs. Interviewees should remember that if you make life easier for the interviewers by preparing yourself, answering the questions, and not giving your life history which may be full of irrelevancies, you’re more likely to get the job. Arrogance and assumptions are not a good idea.  If you give the impression of being a know-all, the interviewer may think that you may not listen when it comes to being trained. Saying that you cannot answer a question saves time so they can move onto the next one. You’re not supposed to know everything about everything but have the right attitude of enthusiasm and show a desire to apply yourself.  Most of the training is on the job.

Today Sunday, the temperature has shot up about 10°, the sky is blue and this is the time to go for an afternoon walk along the abandoned railway tracks which linked Midsomer Norton and Frome. We were the only walkers and were able to enjoy the silence and were made aware of the variety of birdsong as they prepared to make their nests. 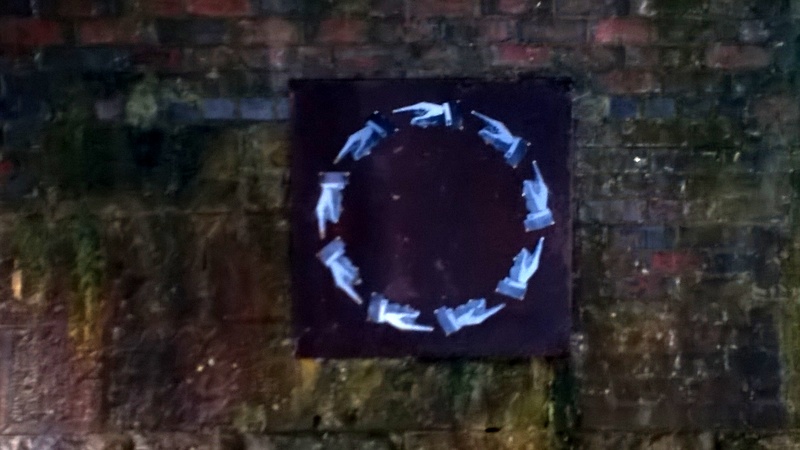 I saw this under a railway bridge; it has to be the most confusing sign imaginable, perhaps a never-ending chain of command. Nobody wins here.

I never know whether people take their dog for a walk on whether the dog takes them for a walk. I suspect it’s a bit of both. We had our share of lively dogs checking us up by sniffing and being so excited about the amazing variety of smells available in a post-snow situation. I suppose the odours are more distinctive because they are uncontaminated by for example petrol fumes. We met a man whose dog only walks towards him when he is facing the dog. When he turns round, the dog stops. Another man was endlessly calling his dog to come out of the railway cutting to absolutely no avail. He had to get off his bike and walk down 45° slope to persuade the dog to take any notice at all. I thought the dog was just having fun.

I just heard that the YouTube channel Natural News run by Mike,  a colleague has been terminated by the management, wiping out 1700 videos and more than 350,000 followers. Mike says “while they gladly host murder videos, animal cruelty videos and videos that demand the killing of police, they’ve wiped out all my videos on farm donkeys, chickens, and home gardening. This all happened immediately after I posted an article exposing Youtube’s assault on your ability to think for yourself”.

This sounds very much like commonest China to me. If you have a valuable video that you like to watch on this platform especially if it contains contentious material you might want to download it as soon as possible.

So you think this conspiracy theory stuff is all nonsense do you?