They say that when you get older, you tend to eat less. I can’t say I’ve noticed. The world of calories is still a closed book to me. I freely admit that I eat too fast and too much. The problem is that I enjoy it. There now, confession over and it’s only eight o’clock in the morning. What does strike me however is the common sense of filling up your car with petrol (gas to USA readers) before you start your journey not at the end.

What I have noticed is that I’m increasingly intolerant of certain chemicals within bread and that is why, for the last three years, we have baked our own bread and I would never go back to buying bread from a shop. About chemicals, I have stopped buying ready-made foods such as trifles because I discovered that chemicals have been put in them to prolong their life. It also makes me sick and the food repeats on me. This is not a pleasant experience, which counteracts the delight of eating the food in the first place, tickling the taste buds you could say.

I don’t think I’ve ever discussed the baking of bread  in these diaries before. I reckon I could go my whole life through and never experience the whole gamut of this art. There are over 300 different types of bread. It’s not only the ingredients which on the face of them are fairly simple, but it’s getting the proportions right, figuring out how long to let the yeast do its work, how long and at what temperature to cook. After two years, I reckon I’ve made most of the mistakes that I could have done including making a local bread whose interior looked a bit like the caves at Cheddar Gorge, bread that simply refused to rise and sat there in a hard lump, and bread that crumbled as soon as you looked at it. 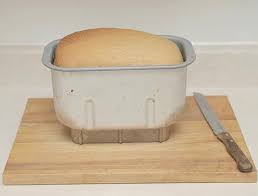 I do use a bread making machine but mainly as a mixer. I find that if you put it on full automatic you get the annoying hole at the bottom resulting from the space left when you pull the paddle out, and secondly I discover that the resulting bread is slightly undercooked. Overall, it’s worth the effort and tastes delicious. If anyone is thinking of having a go, it is less complicated than you think. The basic instructions are: pour about 320 mL of water into the mixer, add 500 g of flour, about two teaspoonfuls of yeast, some butter or oil, some salt. You also add sugar which apparently speeds up the action of the yeast. The total cost of the ingredients? £.60 is about average and don’t forget the cost of heating the oven for up to an hour. If you feel really lazy, try the automatic cycle and if you need to top it up with putting it in the oven then so be it.

We visited for lunch at our favourite cafe in Mells. search on Mells for frequent references to it is actually part of the post office.  There was an African American waiter who took my order for a latte. The funny thing was, she pronounced it ‘lartte’. There was enough of a difference between her pronunciation and mine for me to discuss it. Was her version more upper-class than the flat ‘a’. She said she had never thought of it before and it provoked quite a discussion among the serving team of three. It appears that British English and American English say the word in a slightly different way. British English is more flat, the first syllable is said like latrine or lamentable. In American English it is more like larte, la as in llama.  Hear it for yourself folks.

I had a pleasant enough warm slice of quiche. It contained quite large chunks of beetroot which together with a salad of grated red cabbage and carrots made for a rather unbalanced meal but hey it was healthy enough and at £5.95 I was not complaining.

In the restaurant there was a very happy looking lady with a child in a pram sound asleep. I approached the lady, and was moved to say in my usual spontaneous way that the child very contented and that if the child felt loved in the waiting room (womb) and if the parents wanted the child and had a good relationship with each other, I suspected that that would induce a feeling of security that would last a lifetime. The sad thing is that the opposite is true. I asked her if she agreed with me and said that yes the child was wanted and yes the child is content and sleeps well. You might say, why bother to say something that is fairly obvious. I don’t think it does any harm to repeat the obvious because it is such an important statement. Maybe, as a result of what I said to her, she will repeat it to one of her friends who is also pregnant and that will have an effect on the welfare of the fetus. 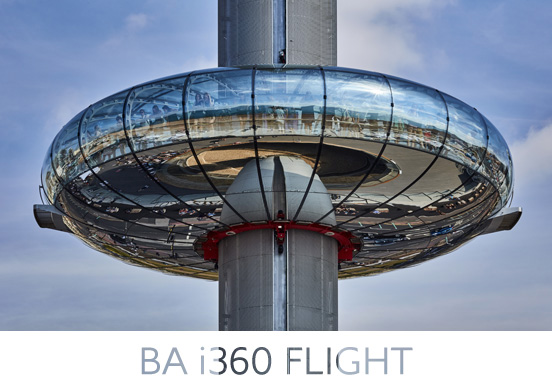 We met a couple of young chaps on bicycles who were staying locally and who lived in Brighton. They had moved to Brighton from London and commented how much friendlier Brighton was. I asked one of them if they had been at the new tower, the so-called i360. British Airways, who rather pretentiously called the trip up the tower a Flight. They said that flights leave every 30 minutes. The cost of this experience is £16 for adults and £13.50 for concessions. They question the value of this. After this comment they had noticed how much friendlier Somerset was than Brighton. I said that people do not have inhibitions here and you can more or less talk to anybody. I said that it does take some getting used to but that is the case.  Best wishes all round,and another good conversation.

Before we left Mells, we stood and contemplated one  of the temporary streams that come into existence during snowmelt times or times of rain. I enjoyed listening to the sound of the water. I find anything to do with running water very healing so I decided to make a video.

In case you missed it here it is again. Turn sound up.

Prior to this, my Tuesday church coffee morning was a lively affair.  The problem is that things can become too lively because all four walls are either glass or hard reflective surfaces and before you know where you are everyone is shouting to make themselves heard. This is particularly difficult for people who are deaf or semi-deaf because they find it more difficult to sort out one voice from another. We all discussed the post-snow situation; one of the other people had their car port in front of the house in a well below ground and the whole area filled up with snow so the car could not be seen.

At a coffee morning, my wife and I met a young psychology student who was studying at Plymouth. I remarked how heavily this place was influenced by the seagoing history both in the Navy and in general. I asked her what she was intending to do and she said she wanted to deal with children with learning disabilities. I asked whether there was any manifestation of Political Correctness. She said there were one or two people who were “that way” but said most of them were not particularly concerned with this topic.

The lady on duty cooked us delicious oat  biscuits and also some stones. The vicar came and joined us. He is a great fan of Netflicks, and described the quality and variety of plays and historical documents that the company were able to invest in due to the profitable nature of their service. I have so much to watch already with a mountain of DVDs, (the educational type), but I still haven’t got round to watching because I’m too concerned with the current offerings on the Internet. During the last couple of years it it has become much easier to find free of charge films to watch so I could spend 24 hours a day watching and I still wouldn’t catch up. That must be more to life than this. 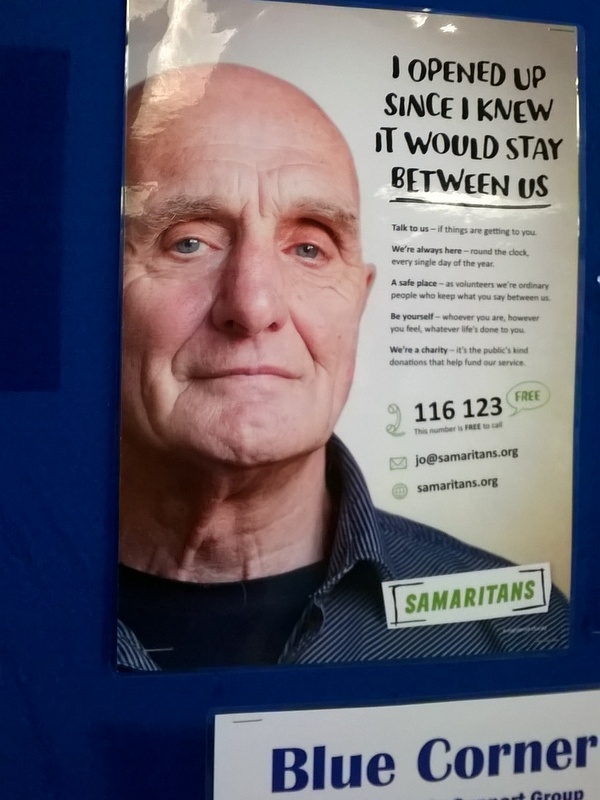 I’m quite impressed about the efforts the authorities are making to take away the stigma of calling and applying some elementary psychology to what might put people off so doing especially when the topic is very private. I saw this in the doctor’s waiting room when I was there today.

I also saw something I had not seen before which was a leaflet entitled “poems in the waiting room”. This is a private initiative enterprise to introduce poetry to the doctor’s waiting room, and no charge is made to the NHS. I’m sure there’s thousands of ideas out there and if only they could be spread I think the quality of everyone’s life would increase.

Here is an example of one of the poems:

Lines Composed in a Wood on a Windy Day

My soul is awakened, my spirit is soaring
And carried aloft on the wings of the breeze;
For above and around me the wild wind is roaring,
Arousing to rapture the Earth and the seas.

The long withered grass in the sunshine is glancing,
The bare trees are tossing their branches on high;
The dead leaves beneath them are merrily dancing,
The white clouds are scudding across the blue sky. 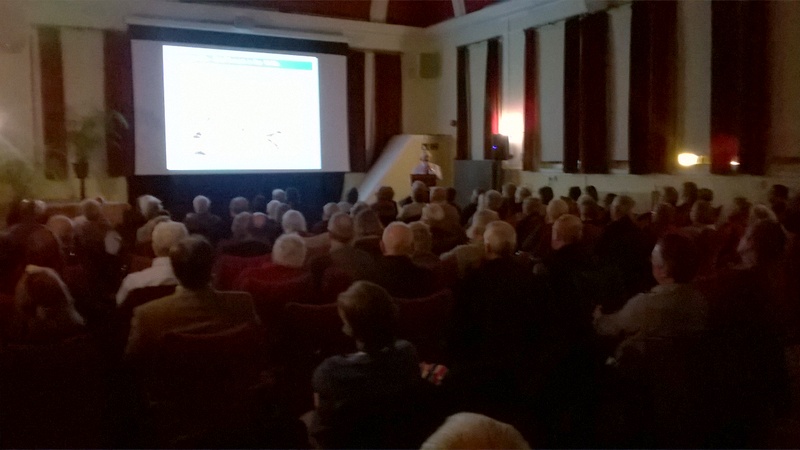 To the Town Hall to listen to a talk by the local History Society on the Beauchamp family, early entrepreneours in the local coal mining industry. There were about 100 people in the audience, filling the town hall. Locals will always turn out for something historical reminding them of an earlier part of their life.

Basically, the Beauchamp family took over most of the collieries in the area which they managed with varying degrees of efficiency. This is a coalmining town and it is quite common during a talk for someone to recall that their grandfather was a miner who worked in the early years of the 20th century, how bad the conditions were etc. The dynasty died out with the nationalisation of coal and the formation of the National Coal Board. The family line were reduced penury after spending most of their fortune unwisely as opposed reinvesting the company. Money can be like alcohol, it can definitely befuddle your judgement.