One day I must write a book talking about all the snatches of conversation I have heard in my travels. We arrived at the Wednesday market in Wells. A stallholder was telling one or two passers that him and a friend had played golf last Saturday when everything was redolent with snow. It gave him much amusement to tell them that he had lost 12 balls and that his friend had lost 13. It was quite a mental teaser for me to figure out why a supposedly intelligent man would play with small light coloured balls in white snow. The probability of losing them what I would have thought 100 to 1 and still they did it. I should have retraced my steps and engaged to him but I went into minor shell shock and the moment passed.

I expect many of you have visited Wells, which is a picturesque and compact City containing all the essentials: good restaurants, Cathedral, lovely gardens, a cinema, the obligatory Wetherspoon’s and every attraction is within about 300 m of everything else. I was shocked to see that no less than seven established shops were no longer trading. This does leave quite a hole in the high Street. There was a furniture shop, a watch shop, a sports shop which you would have thought would attract enough people in a busy city but no it was probably the threat of an increase in rates that was the last straw.

I went to my favourite pub. They serve double house whisky for £3. As the pictures will show, this is a pub where the landlord has made an extra effort to make his house attractive. Here’s what we can call a down-to-earth person but he’s very conscientious and his heart is definitely in the right place. There is a lovely garden / patio area at the rear.

We went to lunch at the Good Earth restaurant. I thought that as it was only slightly after midday it would not be busy but the place was full and there was a queue to get served. That’s what you get for offering home-cooked food, vegetarian as it happens, with staff who know what they’re doing and love their work. We have to share our table with a fairly senior couple. She commented that my food had the appearance of ” a mess of pottage“.  I had forgotten what that meant. It is from the old Testament. Do you dear reader know what it means? It is “something very little trivial or of inferior value – used especially of something accepted instead of a rightful thing of far greater value”. The Bible story refers to the addition of lentils for which the hungry Esau sold his birthright to his younger brother Jacob (Genesis 25). I cannot recall having heard it used at least in the last 10 years of my memory.

We then went to the Cathedral Gardens for which we pay a joint admission of £52 per year. I enclose some images to show the beauty of this feature several times of year. It is very well tended by gardeners who love their job; there is something for everyone including a play area for children. A bonus is that there are some allotments abutting on the gardens and the friendliness and openness of the local people is there for all to see. On one occasion, after a brief chat, a woman offered me some cuttings to take home. Strangers, do not hesitate to engage. If they are living and  breathing, that will do as a start.

We went to see the film “The Shape of Water”. As it was a matinee performance, we were entitled to coffee and biscuits.  I can see why this  film won so many Oscars last Sunday. The Oscars were, by the way, the best Picture, best actress in a leading role,  best actress in a supporting role, and actor in a supporting role.  It also obtained the prize for best director and also the best original score. In case you hadn’t gathered, the acting was excellent. It’s about a mute lady who falls in love with an alien being. It’s a most original film where the theme has been treated with great respect and imagination. I won’t spoil the story but it is definitely in a class of its own in cinematography and presence. Even the violence is artistic so close your eyes if you must.

We walked back to our car and on the way I was able to capture some lovely pictures of our shadows in the setting sun. Back to a home fire and to writing this diary which has become part of my end of day routine. I seldom get comments. If you don’t like filling in forms just write to me at   brian @ pobox.com 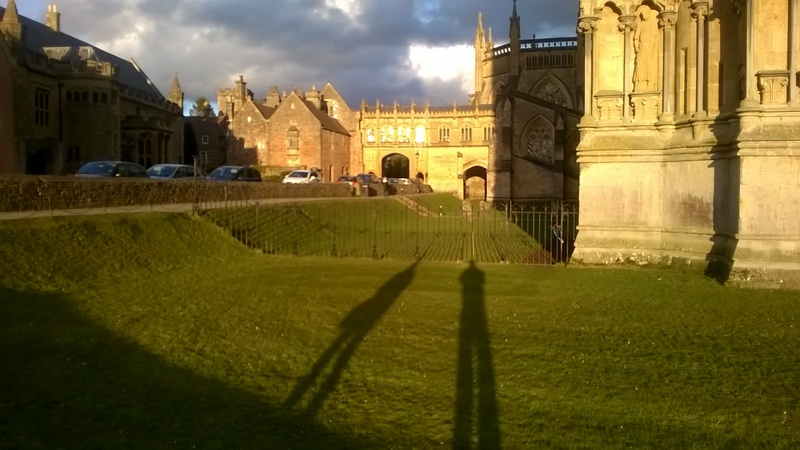 With a clear blue sky turning pink I expect the temperature will go down to about zero again.