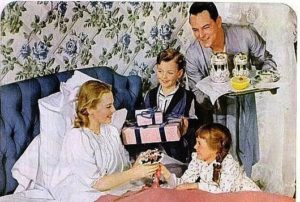 You see dear people there are two varieties. First let’s have a look at the way that one of them, Mothers Day,  developed in 19th-century America when a lady called Ann Jarvis first organised a group of mothers to help out with sanitation at camps on both sides of the Civil War during a typhoid outbreak. These were called Mothers Day Work Clubs. The campaigning of the daughter, Anna Jarvis, culminated in a proclamation in 1914 by President Woodrow Wilson that the second Sunday in May be a national holiday. Other countries followed suit.

On the other hand, Mothering Sunday in the UK is the fourth Sunday of Lent and has nothing to do with the American festival of that name. This was a day when children, mainly daughters, who had gone to work as domestic servants were given a day off to visit her mother and family. This was originally and traditionally a day to honour to give thanks to the Virgin Mary, also known as Mother Mary. The modern recognition of this day came about through the efforts of Constance Adelaide Smith (1878–1938), who worked as a dispenser of medicine in Nottingham, and drew directly on pre-modern traditions.She had noted the celebrations in America but felt that there should be a deeper, more inclusive definition of mothers and mothering.

Today I read in the Western Daily Press that they were going to introduce 5G mobile phone technology at the Roman Baths. We are informed that the government has awarded a £5 million grant to the West of England combined authority to trial the superfast 5G network. The test will see 5G infrastructure put in place at the Roman Baths in Bath, which date back to about 70 A.D. The trial will also be carried out at two sites in Bristol – at the M Shed and in and around ‘We The Curious’ (shop) and Millennium Square. They are selling it on entertaining the tourists – producing images of virtual Roman soldiers showing you around the Roman baths and enabling the same thing on your mobile phone. It says ominously that “it won’t be used to human communication alone; it will also support communication between things humans have invented, forming an Internet of things. This will have a huge impact on people’s lives.”
That’s to be sure but not in the way they write. I wrote a letter which I have no doubt will be ignored but I have a duty of care to my fellow citizens to write it; the letter is below. The body is not built to deal with high frequency pulses.

Dear Sirs,
The benefits that are claimed for this proposal are spurious and dishonest.
Hear it from me or someone else. Your choice.