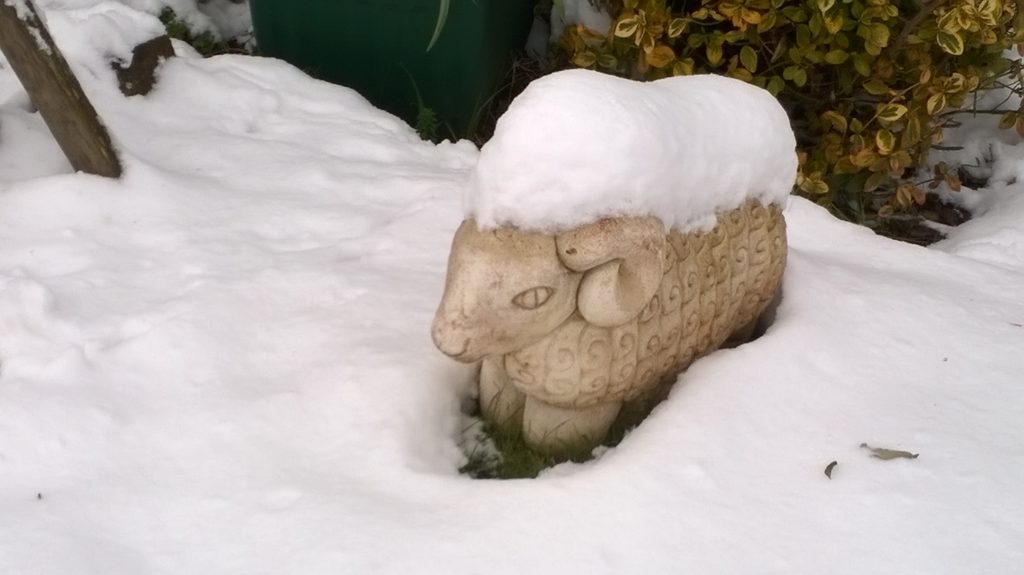 When we thought winter had gone on its way, we have another blast from the East. This is Lola, our sheep cast in stone, with an extra head-dress.

One of the things I enjoy most is dreaming up and putting into action new ideas. I may have mentioned the organization, one of these One World ventures called, confusingly, UBUNTU. Yes, I know it’s the same name as the PC operating system but this is another type of platform, not software before genuine human beings who want to make a difference to the world. This morning I had a meeting by Zoom which is a video conference app. Dream which we decided the name and the starting points to reconstitute an organisation that has suffered from lack of management. There is absolutely no criticism of anyone because with the wisdom of hindsight you can make high and mighty comments but at the moment of creation if you could have a God’s eye view you would see that everyone was doing their best.

I happen to love databases, lists, tidiness and order, and anything I can do to build up a sense of community among us beleaguered human beings. I have registered the name Ubuntu.news and yes that is the full domain name. It’s amazing what post scripts you can have these days. Having spent three hours doing administrative tasks I am now going to sit in front of the fire and read. 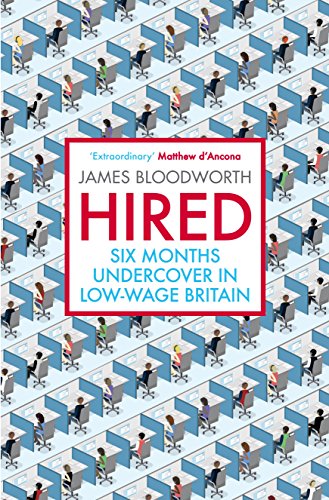 It is so tempting when Amazon offers books to read on the subject you are interested for £1.89p. How can I say no. Why should I say no? I get the PDF file on my Kindle in 3 minutes so how’s that for being spoilt.

I ordered a book called “Hired: six months undercover in low – wage Britain” written by James Bloodworth. It is about a man who sought out the most lonely and wretched jobs and one of them was in Lincolnshire working mostly with Eastern European people. He described how brutal the management were, how you were not paid for having a toilet break, how everyone had to wear a tracker and were unceasingly monitored by managers who would send them messages telling them to work harder. They were given half an hour lunch break but by the time they had checked out with security they had barely 15 min to eat their food. The average time of walking per day to fulfill the orders was 10 miles. This company was ……. Amazon.

Through the day, I have been receiving nice comments from those to whom I sent the community bulletin. We should not forget that there is a lot of goodwill out there, a lot of people who really do want to see the world a better place. These people are the humans, way above in my estimation the bunch of psychopaths, the 1% of the 1% who run this planet and destroying it for their own entertainment it seems. Why add extra Mercury to vaccines intended for the African sub continent initially wanted to damage their brains. anything that weakens the immune system, and if affects the blood brain barrier, has no business in vaccines. In case you hadn’t realised, eugenics is behind this policy and Bill Gates, the donor of these vaccines and other good works so-called is an averred eugenicist.

I have today registered a new website in connection with my new editing project. I tend to work seven days a week if there is something that interests me because for better for worse I always want to be doing something and being productive. My brain does not take a day off, perhaps it should, but I like working too much to entertain this at the moment.

I was looking again at some of the political women’s movements who are deriding men as a race, especially middle-aged white males. I wish they would take a look at themselves. If I said in public that I hated all women they would say quite rightly that there was something wrong with me, that I needed attention of a professional type. And yet these humorless men haters can make announcements about their global hatred of half the population of the world and everyone applauds them. Let’s face it, you have to be fairly unbalanced to even contemplate a vast client group as being your adversary or your enemy. These so-called women remind me of swarms of wasps.