I learn lessons when I least expect them. Our living room fire had lingered overnight. Coal is much better than wood for burning slowly. First thing this morning, I put some twigs on and a few bits of the kindling and nothing happened. Suddenly, the fire started to blaze. Indeed, it roared. It was as if all the conditions were right. The grate was hot, the wind was blowing over the chimney at at least 20 miles an hour, the wood was dry. It was the perfect storm of right conditions. It is very much like this with an idea. You can have an idea and it can suddenly go viral and take off with it’s own power. It reminds me of the phrase “there’s nothing so powerful as an idea that has reached its time”. You don’t have to supply the motive force. It just goes by itself.

George Orwell’s book, ‘1984’, was not a prophecy but a warning. Orwell was perfectly aware back in 1944 what was being planned.  He was friends with Aldous Huxley who was chairman of the Fabian Society. Some of you may not like to read this but the running of the world including the 7.5 billion  human beings is being given a major makeover. It is all going on gradually. We could call it the Totalitarian Tiptoe after the child’s game of that nature. I would just like to remind you what George Orwell said about thinking.

“Whether he went on with the diary, or whether he did not go on with it, made no difference. The Thought Police would get him just the same. He had committed—would still have committed, even if he had never set pen to paper—the essential crime that contained all others in itself. Thoughtcrime, they called it. Thoughtcrime was not a thing that could be concealed forever. You might dodge successfully for a while, even for years, but sooner or later they were bound to get you.”

This is from the website of the UK Metropolitan police. It is the latest official attempt to censor speech.

If someone does something that isn’t a criminal offence but the victim, or anyone else, believes it was motivated by prejudice or hate, we would class this as a ‘hate incident’. Though what the perpetrator has done may not be against the law, their reasons for doing it are. This means it may be possible to charge them with an offence. 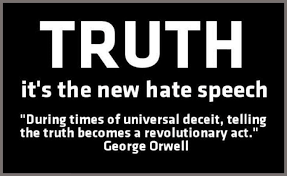 So if you speak or write publicly and somebody believes what you said was motivated by hate then you don’t have a leg to stand on if the police and the judge decide that that might be true. They can prosecute you and possibly send you to prison. The onus is upon you to prove that you were not speaking from basis of hatred. Good luck.

One of the reasons that the art of conversation is declining is that people are frightened to say anything which may upset other people even though the grounds on which they are speaking are impartial and neutral. The fear of this, plus the insiduous virus of Political Correctness ensures that most conversations that take place are just recycling of prejudice, rumors, talking about trivia such as the weather and the result is that the brain loses its acuity. This means that the powers that be can do what they want and no one would bat an eyelid. Once they have your mind, they have you.