Sunday morning. A final chat with my sister about family matters and then off to London to see my oldest friend. No time for the Tate Gallery; I will have to return. My goodness, the rail companies are catching up with technology. On the Thames Link train from East Croydon to Blackfriars what do I see? A rolling information screen in each carriage which tells me how full the carriages are, where we are situated on the train, the status of the lines on the London underground system and which of the toilets are vacant.

And so, on to Camden. This is a magnet for tourists. You know that if you get on the Northern line going north, 75% of people will get off at Camden. It does have a unique ambience and is always very busy. There is always something to entertain you at Camden Market which is  good for a takeaway snack from one of the food stands. Competition drives the price down and you can get a decent take away box of food to keep you going for £5.

Graffiti is an art form. Any idea where this is? It’s near the Roundhouse London NW5, opposite Chalk Farm station. Worth increasing the size of the image on your PC to see detail.  I now find myself in my old stamping ground or one of them, Camden Town, Haverstock Hill where my wife used to live. By coincidence, it is the residence of one of my oldest friends if not the oldest. We first met when we were both doing temporary work at Streatham sorting office in London on about 15 December 1964. Our relationship has continued since then albeit with gaps. I make that 54 years which is not a bad record. I think that the person who can understand you most is the person who sees you by default with a vision of and memory of a number of stages both personally and professionally. Very few new friends would have the ability, the wisdom or simply the knowledge to give a wise comment arising from perspective and thus would be limited in the advice they could give.

We decided to go to Hampstead Heath for a walk and to have some lunch. Hampstead Heath is an area of London upon which no building is allowed. If anyone dared to even talk about encroaching on it the penalty for hanging would be introduced immediately by infuriated Hampstedians. The park  is run quite strictly by the City of London and won’t betide you if you even think of using drones. Londoners are fiercely loyal to this area which contains an historic house called Kenwood House which contains a cafe presided over by jovial and sophisticated restauranteurs I think from Spain. I have to face the fact that main courses in London, especially in Hampstead, cost £15 and no less. That is the market rate, take it or leave it. I had a pretty good quarter size chicken, cauliflower cheese, lashings of gravy, lots of mixed vegetables al dente, and roast potatoes to die for.

The place was heaving with people. There were à la mode families with children called Deirdre and Griselda or Josh who were behaving fairly well. The best gauge as to the weather is the number of people that venture on this beloved Heath and so we engaged in conversation, my old friend and myself. One of the features of sophisticated people is that you can engage in conversation with them, intelligent conversation at that, and they are quite happy to take part at the drop of a hat. The same is not true in Midsomer Norton, as you would expect, nor even in Bath which tends to be a bit snobby. I love cosmopolitan people. They may be prejudiced, but they are open to anything and everything especially if it presents a chance for new knowledge which they can add to their collection.

Afterwards, we went to have coffee in one of the upmarket establishments in Hampstead. Me being me, I had to have a slice of cake. You know when you are in upper-class territory by the cost of a portion. 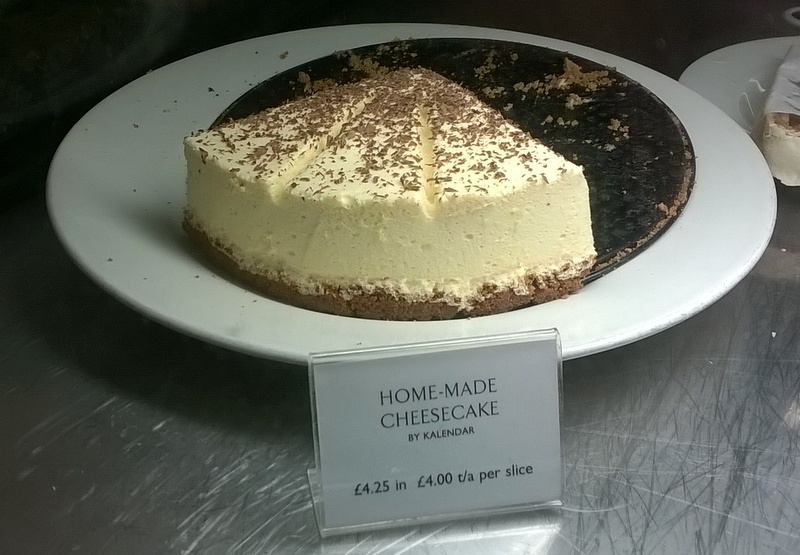 My friend was kind enough to take me to Victoria Coach Station. Travellers please note – as I have said before don’t be snobby about coaches. If you are clever you will have the privilege of paying 25% of what you would normally paid to do the same journey by train. It may take an hour longer but why not use the money you will save on a lovely meal. For example, if I book at the right time I can get a return ticket from Bath to London for £11. A same-day single is £21. Try that on the train. Sometimes, during busy periods, National Express lay on two coaches to depart at the advertised time. We had a choice of going to Bath direct or the coach that went via intermediate stops – in other words the advertised route. I chose the former and we whizzed straight down the motorway then to Bath in 2 hours 30 minutes. 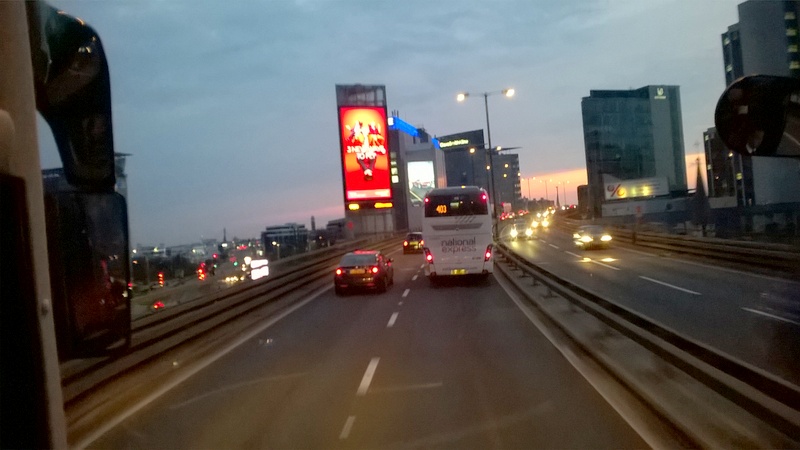 Goodbye London, see you again soon. (picture taken going West on the elevated section of the M4 @ 19.25). The coach in front was the stopping coach to Bath, ours was the quick one.