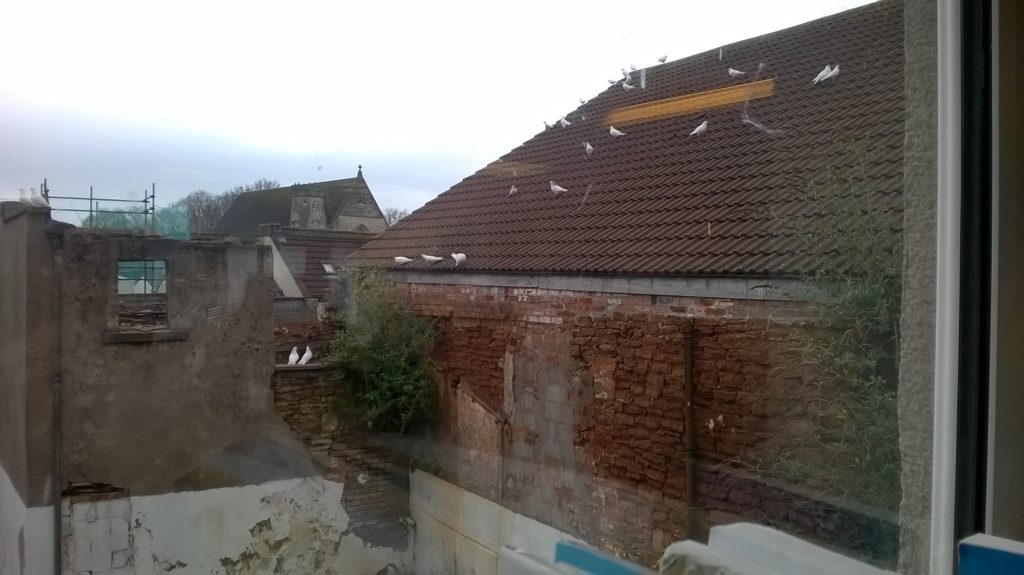 To be quite frank, I’m quite surprised and curious to know what made Wetherspoon’s decide that this area was a good place to put down some roots. We have about 22,000 people in the conurbation of Midsomer Norton. The club chain only have about 1000 branches in the UK so maybe they are on a mission to take over the whole show. We have four pubs in the high Street and the working men’s club at the end. Wetherspoon’s is going to occupy what is now virtually little more than a shell, the old cinema which was closed about 20 years ago I think. I’m showing you the most glamorous picture above because the dove coots have been demolished and they’re all having a conference to decide where to live.

I cannot see more than two of the pubs surviving because Wetherspoon’s are such a big company that they can afford to make attractive offers to people example breakfasts for £3.50 as a loss leader I imagine. I’m told it’s going to open in September.

If you’re going to Wetherspoon’s in Victoria station, London or nearby you will find the prices are just a bit less than elsewhere never mind the one in terminal four of Heathrow. That is not because they are becoming greedier but they have to pay huge rentals and rates. The mayor of Midsomer Norton thinks that new jobs will be created and I’m sure he’s right but you have to subtract the jobs that will be lost if two pubs close. I think it’s a very  difficult decision for him but it does upgrade the town somewhat so I can understand where he’s coming from.

Most of my correspondents in F…book seem to be from America so I tried asking Google how many people there are in each country and I discovered to my amazement that the biggest number of users is … Well have a look for yourself. Try to guess first. 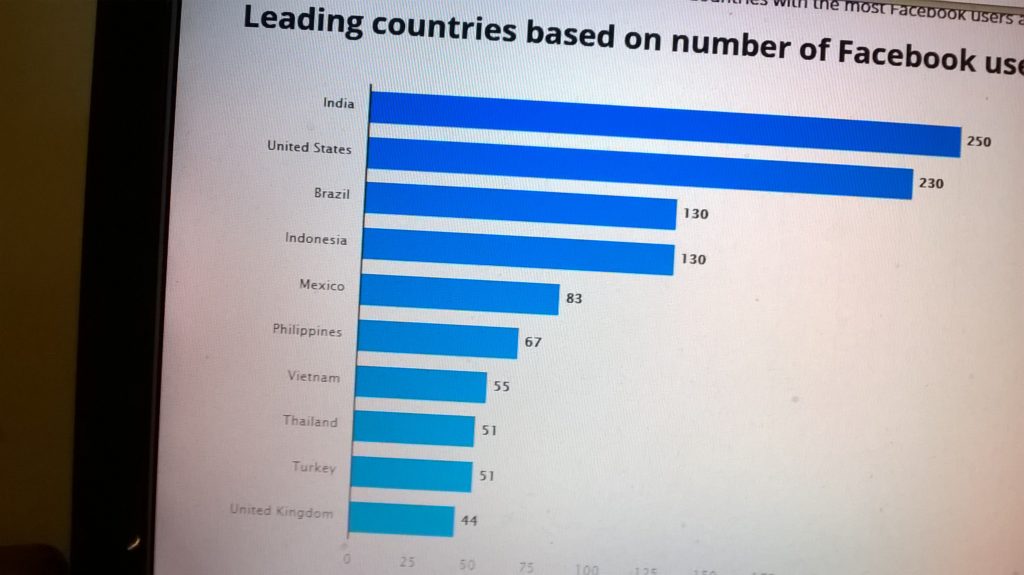 That’s 250 million users in India followed by USA and the UK in 10th place with a paltry 44 million users. I’ve got to say that the algorithms must be absolutely fantastic because the quality of service, I’m not talking about the content, is very good and I’m only just getting to grasp the detail. I have not figured out how to do my own page yet nor the nature of the ‘wall’, the famous wall but I think if I am to introduce myself properly I’m going to have a linked website. Yesterday’s record of five total scams including pretending women was really quite good but who knows one fine day it may be beaten.

There is no letup in the number of “interesting events” from my engagement with F…book, and its only 5:30 PM

#1  I greeted a new friend called Dean S…….., bearded and tough apparently who sounded quite interested in the things I’m interested in. When I clicked on it I got a GIF of a lady doing something which obviously made her very excited. So, we have fake men. She/he was blocked of course so now I have to be suspicious of all so-called males, even males with beards.

#2  I was interested in signing up to a group called The Future of Humanity. On clicking I found the group had been deleted, just like that. This is the policy of F-B of removing apparently conservative groups for no reason. Same with Natural News. Nothing you can do folks.

#3  I had the privilege of being blocked from a local group here in Midsomer Norton for buying and selling. One person wanted a USB stick without giving any details of it and said ‘cash waiting’. it seems this guy is seriously out of touch with you can get them for nothing these days so I told him about a new one, 32 GB, that could be obtained for £6.50 including post. The requester had suggested I drive to Shepton Mallet which is about 8 miles away with the item as if it was huge. Anyway the moderators thought I was interrupting the process in some way so I got blocked. I think the first time it doesn’t last too long but I thought that was a bit petty but there you go.

#4 – only three large chested young females “waved” at me. I don’t even bother to respond in Swahili I just delete them straightaway. If they bothered to look at my profile they would see that many glorious years separate them and myself and I am also married. I wonder if it’s a bit like the Nigerian 419 financial scams.

On the other hand, I have had dialogues or conversations with two or three people who are really interesting and have something to say. One of them was talking about my reactions in my hands which take the form of small electric shocks. A lady who had tried it, not knowing what she was doing, was a little bit anxious about it and had stopped. I wrote to her telling her there is nothing to be frightened of and it’s all part of the electrical field activity round the body which goes on all the time with all of us but some people are more aware of it than others.

I did get a response from someone in Midsomer Norton. FB does have such a branch and they are coming round to help me with putting together my site. I hope it will be a site for sore eyes.  This phrase originated in 1738 by the writer Jonathan Swift when he said “The sight of you is good for sore eyes”.  That was of course a dreadful pun which is about the only thing I’m capable of at 11:28 PM