For the first time in the year, my diary has been silent. I have been a delegate at a conference called AV9 which presents the world not as the mainstream media sees it but from the lips of the participants, what is actually going on. There are some topics that are so shocking even to me who have been involved in the field for many years that to put pen to paper is not easy. I have to relive the lecture or lectures that are fresh in my mind.

What sticks in my mind most of all is the wife of a very brave medical scientists crying her eyes out because her appeal against deportation to France based on nine spurious and false claims was not succeeding. Her husband had the temerity to demonstrate success in the form of treatment of cancer that did not involve drugs and this was too much for the pharmaceutical industry who basically ran him out of town, had him arrested, closed down his laboratories, and even harassed his parents who were in their 80s at four o’clock in the morning. The industry will go to any links to protect their profits including destroying the lives of anyone they choose.

We also heard of an  ex policeman whistleblower who did very well until he started probing child abuse and paedophilia in children’s homes. He was told to back off and this after three attempts was told that if he continued, they would take his children, his house, and his money.  They proceeded to do it without any court hearing..There are authorities who are empowered without any due process to simply order that your bank account be closed. This happened to the two people above. Both of them lived by courtesy of friends and family.

We like to have the idea that this country, Great Britain, is a decent place with freedom of speech but if you upset certain people you will find that it is hell on earth.  In certain quarters, you are guilty until proved innocent and if charges are made against you, it will cost you a lot of money to prove them force the matter how ridiculous the charges.

I reckon I have about a week’s worth of tidying up and trying to understand my own scribbled notes, about 50 pages of them, but one thing I am proud of is the creation of my 5Gexposed site which is the largest repository of references relating to the dangers for us – in effect putting our heads in a  microwave oven. If 5G comes on, we will see a variety of diseases and conditions that I have listed on my site, not the least of which will be more cancers because the body is not built to withstand microwaves. Interestingly, Lloyd’s of London, the insurers insurer, will not touch this possibility of consequential damage with a barge pole. I wonder why. There are so many different types of disadvantages not the least of which is biological. In addition to that, 5G will be the complete espial system for every single individual who is connected in any way to electrical apparatus and devices including any form of telephony connected to either 4G or 5G. 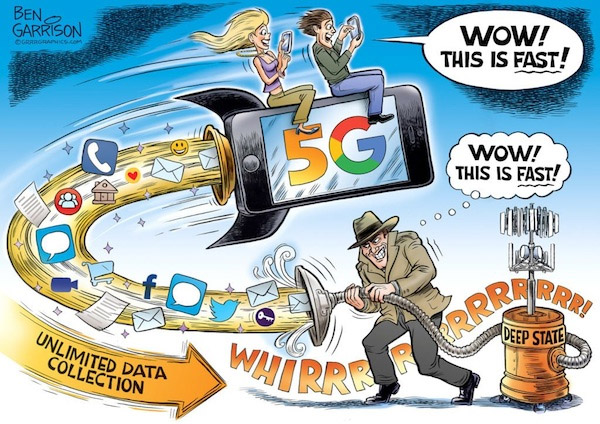 Anyway, the above will give you some idea of what has been preoccupying me. I reckon I’ll get back to something resembling normal service in a few days. Meanwhile, I have to consider normal things like tidying the house and garden for friends who are coming, going shopping, actually doing a little bit of paid work in the form of gardening, and generally maintaining some semblance of normal life knowing the invisible terror that is coming and that with the vast majority population completely unaware of same.