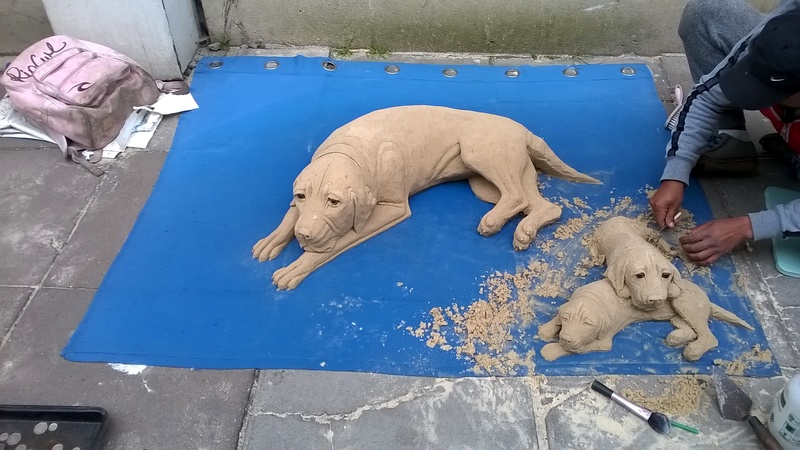 I visited Bath for various reasons and was most impressed by this street artist who reminded me of the artists who work low tide on the River Thames and make all sorts of amazingly large creatures. I was so happy to see this guy and I told him I wanted to make a photograph would give him some money for so doing.

As my regular readers know, I listen to Trans World International 24 hour radio where a speaker quoted a noted scholar John Stott, also a famous preacher, who said that the opposite of poverty is not wealth but justice. This is certainly something to ponder on. Riches do not make a just society but a just society creates the conditions in which no one goes hungry.

This is an example of lateral thinking where the obvious answer, riches, is on closer examination very little to do with anything. I think we have to examine the roots and not the branches of a tree if we want to understand anything at all. The same goes for political events.

Today I spoke with the leader of the Save the Trees campaign in Sheffield, and he noted that direct action, and making an example of councillors who had hidden agendas, what was much more newsworthy than just writing PR and asking questions. Having said that, the Yorkshire Post have just won an injunction under the Freedom of information act to find out why the tree policy is so secret. Sheffield Counsel has the nerve to keep the official tree felling policy secret on the grounds that keeping the information confidential is “in the best public interest”.

I cannot believe that the budget for the removal of about 17,500 trees in Sheffield is £2.2 billion but then the so-called Private Finance Initiative appears to be the gateway for people to earn vast profits and relieve the government of billions of pounds.  I spoke to the worthy local agent of my MP Jacob Rees Mogg and she said that I should not hesitate to write to him over concerns about anything that happened in the Bath and North West Somerset area.

one of the secrets of getting an attractive website has lots of links to other sites and also to populate it with new material every day. My site has been up a little over two weeks and already I have links to 649 URLs however, Google do change their algorithms frequently and discriminate against organisations they considered to be false news but in spite of that I hope that 5G will get good prominence in the search engines as the weeks and months go on.  I’m prepared to put my all into this because otherwise we are all going to end up with cancer and fried heads.