So here we are at the famous Bath and West agricultural show. At least, it started like that many years ago but has now branched out into a combination of the Ideal Home show, an historical machinery show, an outdoor traditional music show and just a lot of varied fun.

As I promised yesterday, days diary is mainly pictorial with comments. The entrance charge for us seniors is £23 which I consider most reasonable in view of all the attractions that are there. So big is the show, that you cannot expect to absorb all that is on offer because you will become tired before you have had time to go round never mind talking to individual stallholders. The first point I want to make is this. Pigs are big. The animal pictured below is about 6 foot in length, round and healthy. Such a pig probably weighs about double the amount of a normal six-foot human being. 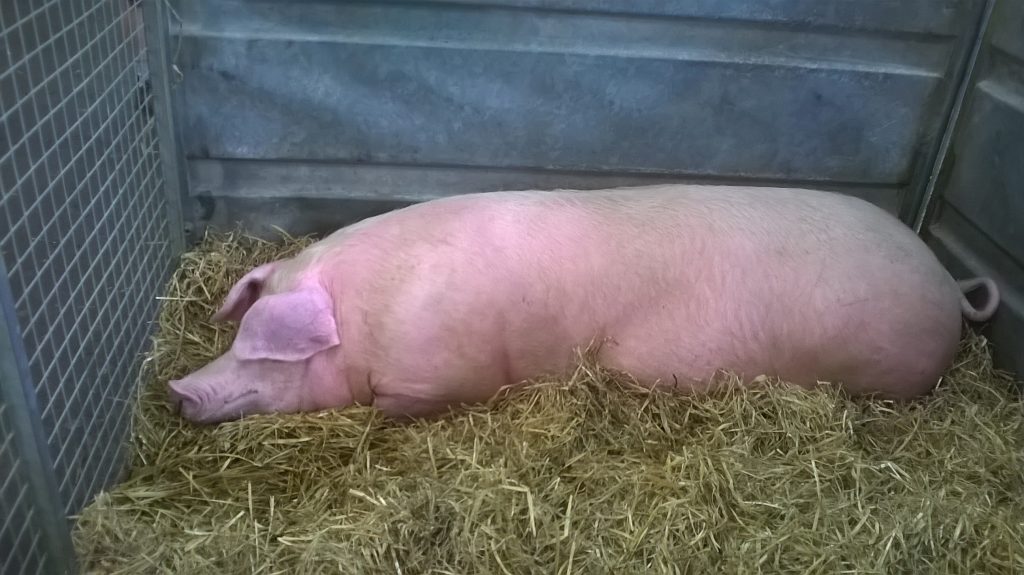 This little chap was quite comfortable having a sleep with his favourite cow; the two of them seemed very comfortable in each other’s company. 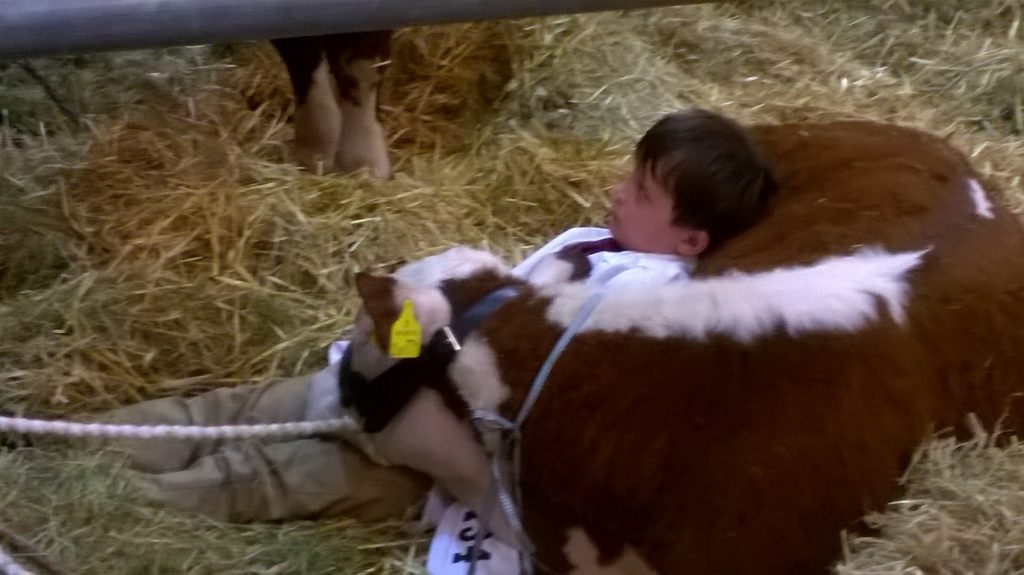 Flowers play an important part in the show, if only to a limited extent. One of the themes was “nightmares”, an interesting theme if ever I heard one, and this is an example below. 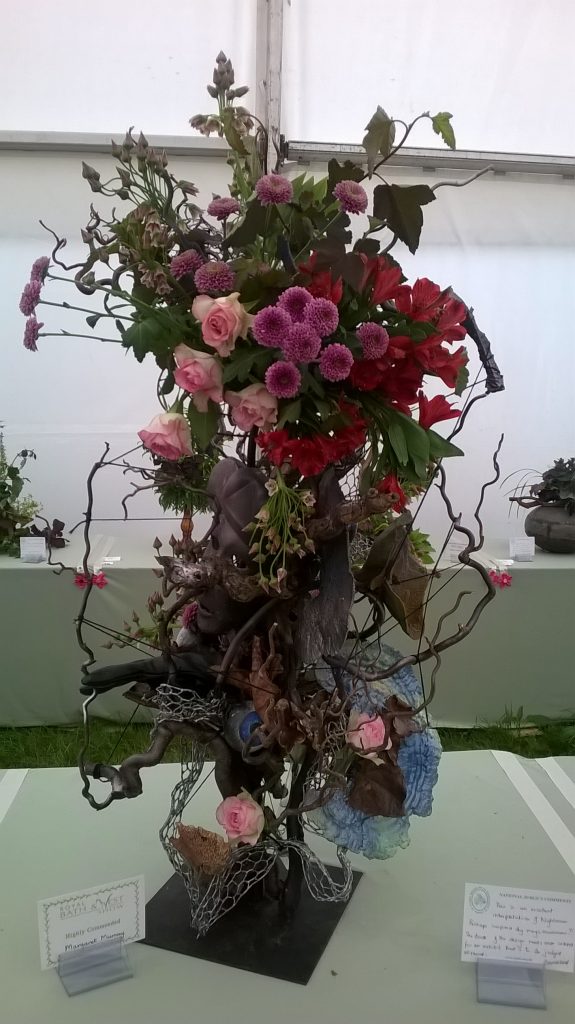 this is a most unusual piece, I can’t remember what the theme was but it reminds me of the laws of physics in some way. 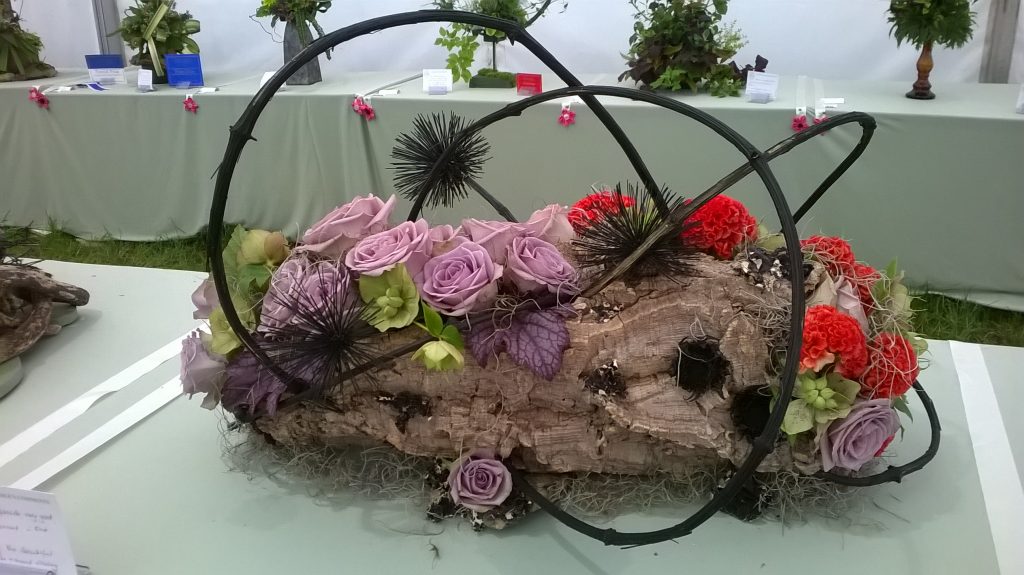 and another Penny Farthing made with great ingenuity 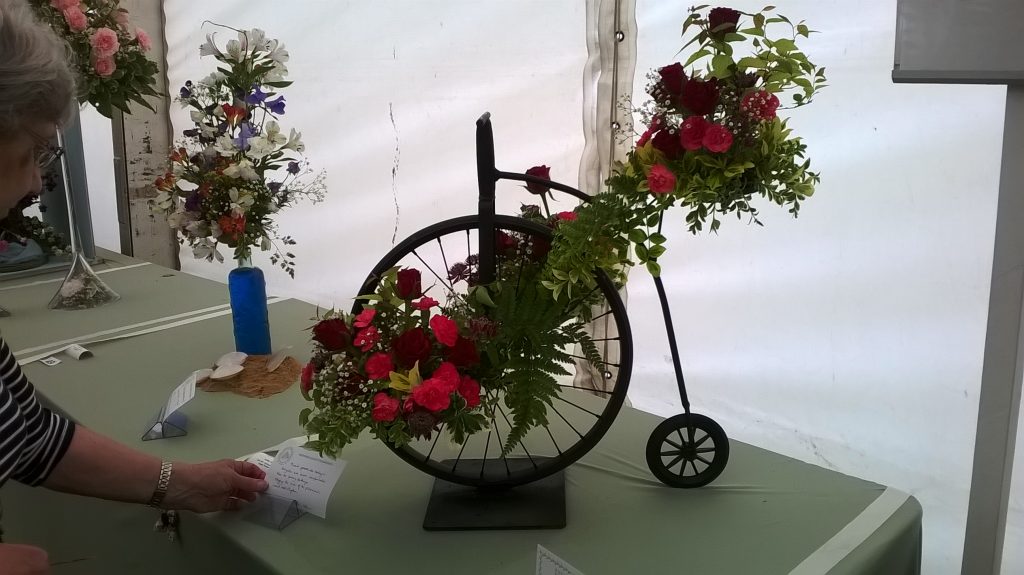 All flying insects welcome to these beautiful sweet smelling plants below. 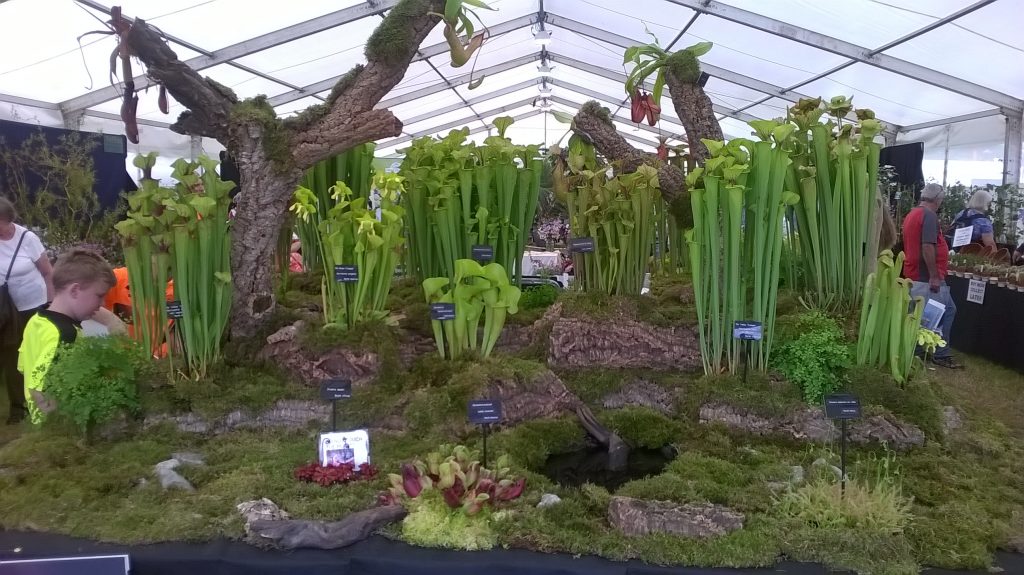 The show has its full allocation of beefy farm machinery of varying sizes. This one can be used for virtually anything and has an attitude about it that ‘doesn’t take prisoners’. I was told that a set of tyres would cost £12,000 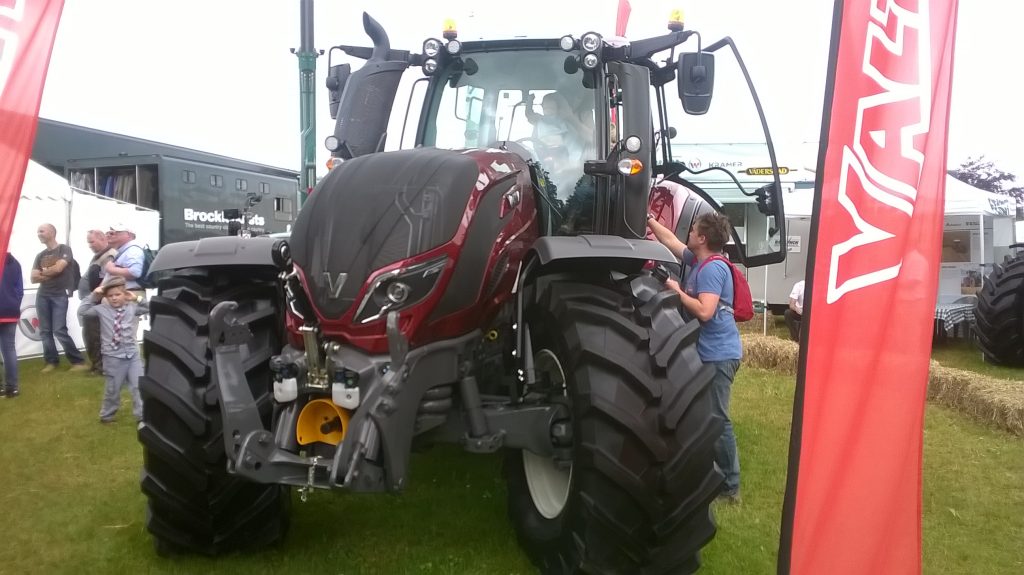 If you want to go back in history though there are two delightful service vehicles at least 60 years old. 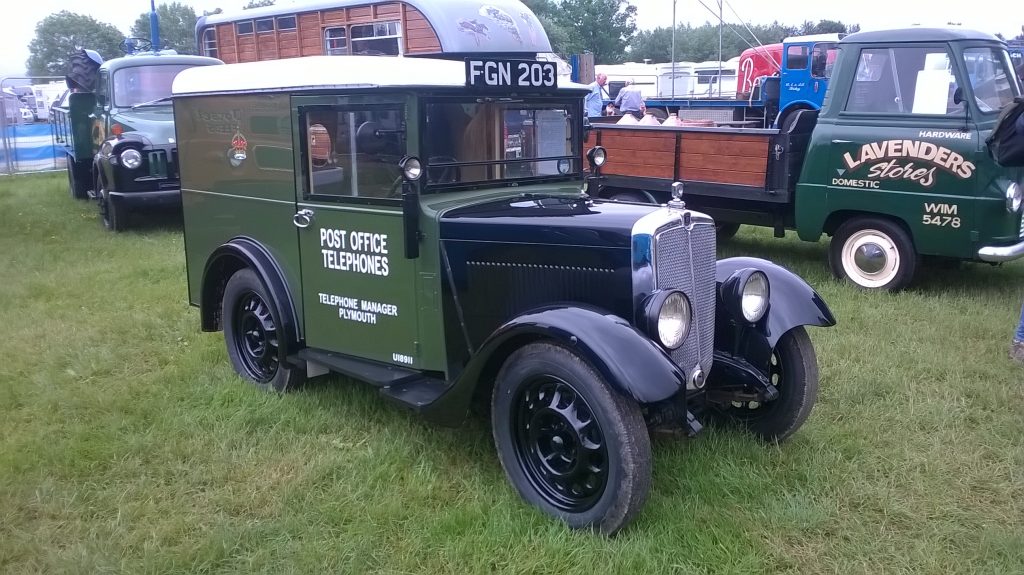 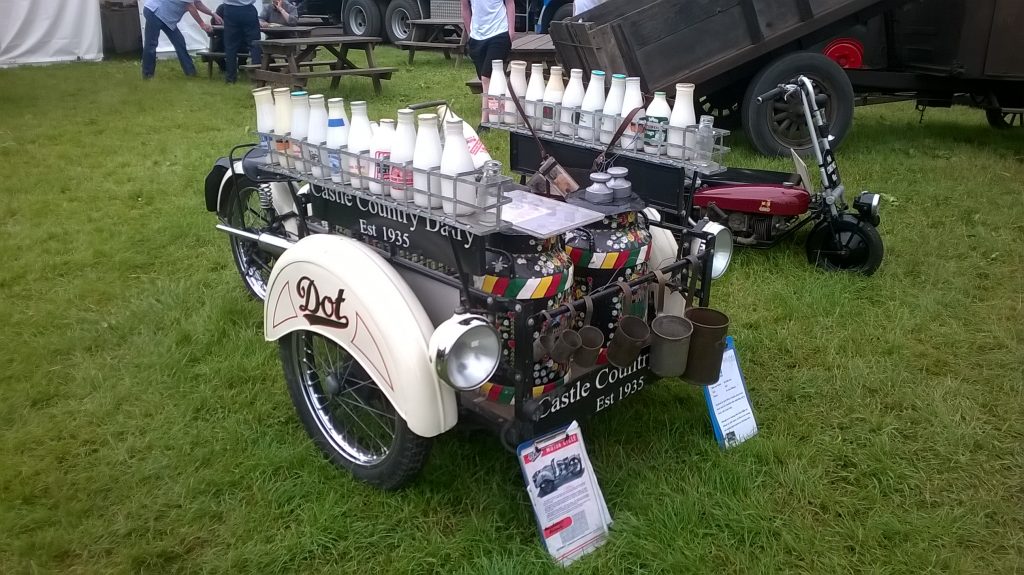 I went into the Christian tent as I normally do. Free tea and coffee is on offer but more importantly a few clergyman are there both Church of England and Methodist who have the chance of making probably the only contact many people have during the course of a year. I was very struck with one of the posters. 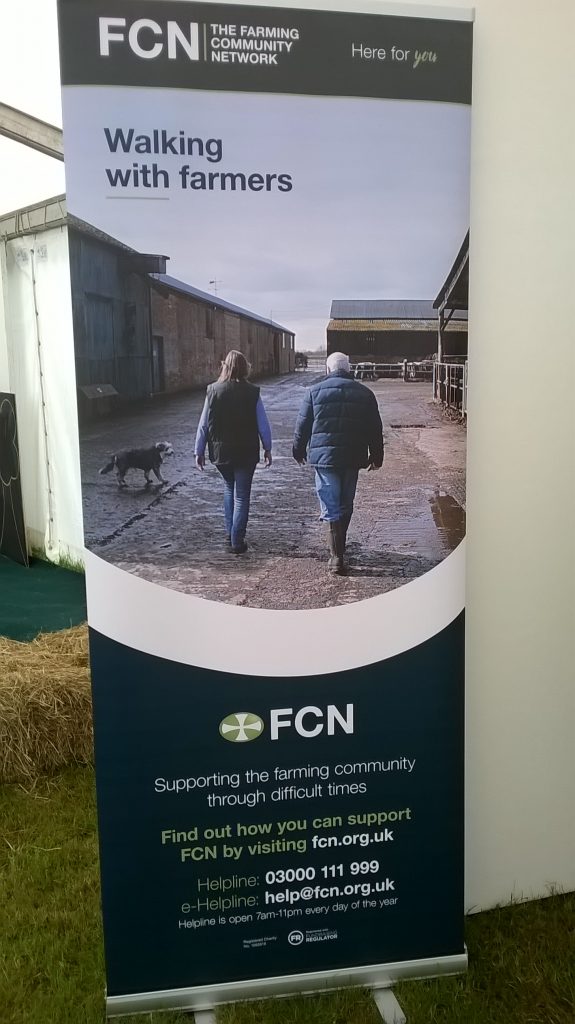 I commented to the vicar that this banner struck exactly the right note. He said there had been a name change from something like ‘farmers in crisis’ because it originally started during the foot and mouth disease when there was a crisis but now they exist mainly to be there and support farmers with whatever problems they might have. There were other very well worded recommendations and exhortations, a couple of which I have shown below. 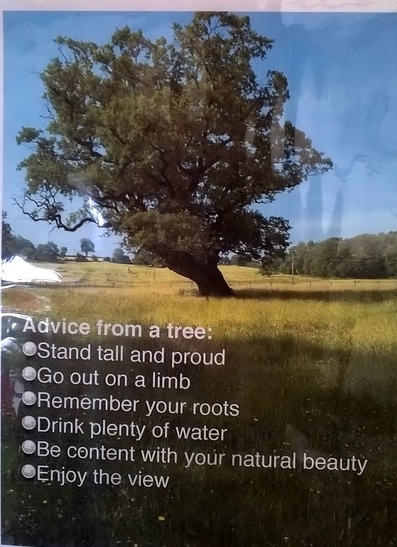 Finally, a ride on the miniature railway.

All in all, six hours well spent. The weather could have been better but at least it didn’t rain most of the time, it was warm, and always the first thing to go is physical strength because walking anywhere for six hours even if it is voluntary is eventually wearing on the feet. Crowds were slightly down on last year but I attributed this to the variability of the weather.