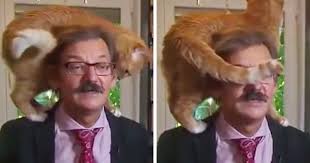 What happens when your pet wants a piece of the action? We have had the second of two wonderful examples of professional people being interrupted. The above is Dr Jerzy Targalski, an esteemed Polish historian talking about the forced removal of a top judge to a Dutch TV station. He just carried on talking when his cat stole the show.

The second one happened over a year ago to Prof Robert Kelly. If you don’t know the story then watch the video.

I think most of us have made a fool of ourselves from time to time but there is a forgiving element in human nature, particularly so far as the English are concerned where the action goes into the category of “well it could happen to anyone”. We are able to laugh at ourselves.

I was pleased nay delighted to hear that Gareth Southgate, the England football coach responded to a question by a journalist that what kept him going was his Christian faith, That is apart from his love of football. This brings me to a discussion I heard on my daily religion radio program where the preacher was discussing why we are not more forward  in talking to others about our faith. He said, in a word, it is fear. Fear of being rejected,  fear of being misunderstood, fear of being laughed at. Just think for a moment on the journeys of St Paul who was not only ridiculed but imprisoned on three occasions. What kept him going was his faith. If we can’t even speak about what we believe among our  friends, what does that say about us.  If we fade because we are criticized, especially if that criticism arises from their own ignorance or bad experiences in the past and nothing to do with us, then maybe we need to reconsider the basis of our faith.

This is the emptiest men’s match at Wimbledon I have ever seen. I wonder why people are not coming. [dramatic pause]  Ah!!  There is a football match on. England vs. Croatia.