It must be said that Bristol is very good at putting on shows of all types; music, comedy,  balloon festivals, and the Harbor Festival that has grown to be one of the biggest in the country of its type. We thought we ought to go especially as the weather promised not to be too hot. In the event it was sticky and unpleasant, not by tropical standards for example India, Singapore or Sri Lanka but uncomfortable enough for me to seek the shade.

Bristol itself is a young and lively town with many trendy pop-up eating establishments, a paradise for young people in my opinion but the problem I had today was the sheer numbers of folk. When you have to walk along a road in slow motion because of the crush,  where you can hardly see what is going on in the water or anywhere else because you cannot get close enough, then it ceases to be fun. 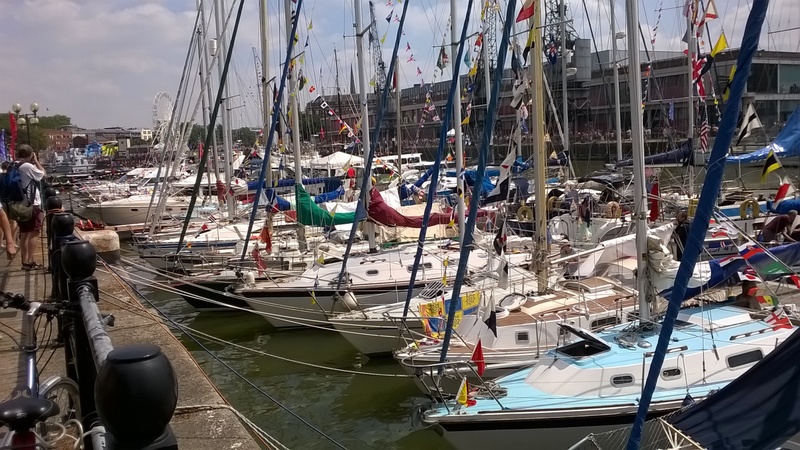 We went along to the gargantuan Za Za Bazaar restaurant which can house 1,000 diners. The noise level was high and I reckon there were about 500 people chomping their way through fairly standard food. Again I found I was unable to sit comfortably and enjoy my food because of the noise level as well as the coming and going. In the process of eating too fast, I suffered from digestion and after I left the restaurant I had to sit down.

Queens Square was devoted to food around the outside and children’s entertainment in the square itself and this is one where we left prematurely because it was physically impossible to walk along in front of the food stalls. I saw one or two other people do the same. 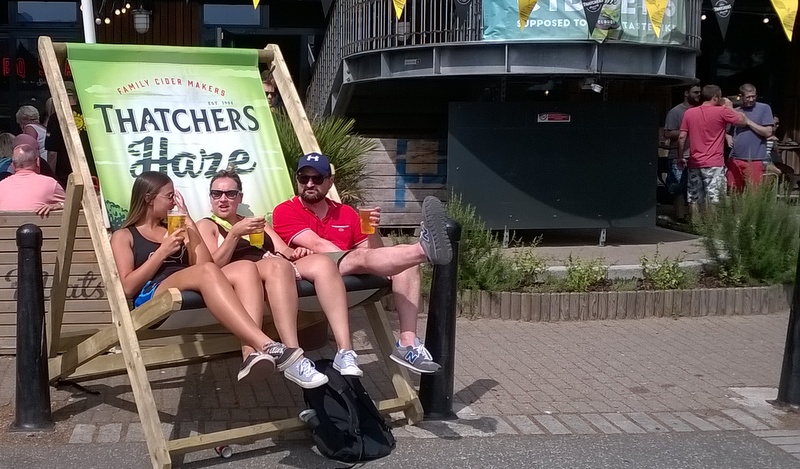 If you look at the whole thing, it was based on a huge number of people selling wares or services of various types, some entertainment in the water for example dog rescuing people and there were one or two old sailing ships punting up and down.

Maybe I’m getting old, but somehow I am fed up with crowds. I have to say that I think it was excellent for children, a wonderful day out for them, plenty of things to see and do and that’s absolutely wonderful because the whole thing was free and parents could relax.

I’m not a depressive type and I don’t think I got depressed today but I got downhearted and alienated from people who were wandering along in their hundreds in a rather alienated state looking for something to get excited about but in all honesty not finding it.

After about four hours I decided that I’d had enough and we made our way to the bus station to catch the wonderful double decker half hourly 376 bus service to Glastonbury and Street. Taking the bus in and out is the only way I can tolerate going to Bristol. We park in Farrington Gurney on the route.

Today I turned down the garden job of some dimension. Fellow gardeners or anyone who is trading their services in one way or another might care to take note. I will not do a job unless I can see my way through from beginning to end. This means being happy with the customer, confident that we can do the job with or without help, and attending to any physical problems such as access.

It is very necessary to take instructions only from one person; in this case the couple clearly did not see eye to eye, and did not have the same attitude to the job. I smell a rat when one partner has to apologize for another.

The second problem was that the job involved a lot of clearing and high summer is not the time to do it. There are certain jobs that are better in autumn and winter when the greenery has died down and the job is much easier to do.

The third problem was the access. The job was in a very narrow road surrounded by old cottages and if you want to get in and out especially with a big Volvo you have to go backwards and forwards a few times.

The fourth problem was the weather. I don’t mind working hard but in 25° all 27° with high humidity it is very discomfiting and every 10 min. or so I have to rest.

I wrote to the customer saying that I could not assist them but I would consider the work in the winter and meanwhile they might want to get other quotes. Okay I was turning down money but I was also avoiding a lot of potential problems and there’s nothing worse than being stuck with a job that you’re not enjoying.