This was our first such occasion last evening with about 10 people from our allotments here in Midsomer Norton and 10 visitors from the local garden club plus Richard, one of the counselors for the local town council.

One thing that surprised and disappointed me was the number of plot holders who said they were coming, even the day before, and did not show up. Bearing in mind that we have 65 allotments why is it that most people feel that they did not want to come to a social event. The first thing I can say is that it was a new type of event, not been done before. However, I would say that the novelty value should have increased the interest not decreased it. It was held on a Tuesday which some people would say might be inconvenient. However since was a lovely evening, I assumed that people would come down to the allotments anyway to do watering, so what is the problem? Maybe plain and simple shyness.

It is a certain type of torture for me to know that if they had come, they would have added to the event and made it even more fun than it was. Visitors were given small tours around the allotment by individual allotment holders. People were very generous with the amount of food they brought along. 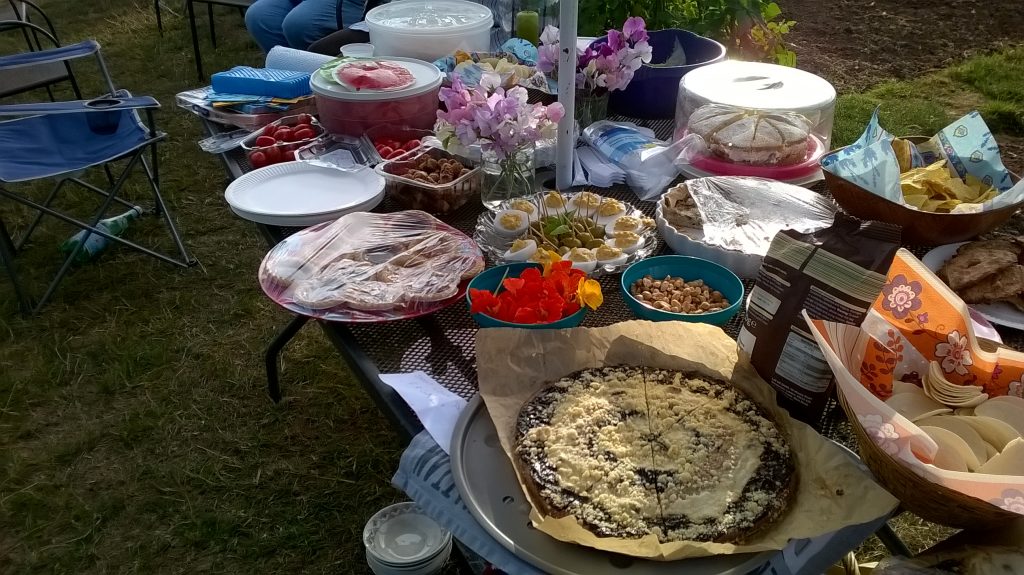 I tried to encourage people to eat but they seem to feel that for the arrival of 6:30 PM, 7:30 PM was the right time to start eating so I resigned myself to that and most people had ample amounts of food. As usual, I bought too much drink. We have four bottles of fruit juice left and four bottles of wine which somehow we will have to consume at home.

How would you judge the success of a party or social event? One of the criteria is how long people stay. About half the people drifted off at about 8.15 (it was advertised 6.30 pm to 8.30 pm) and the rest of us hard-core people stayed for another hour or so until the fading light meant that we could hardly see each other. Francoise lit a few lanterns. Mercifully, the midges kept away as the wind was blowing. Everyone thanked us as they left, and I felt that the thanks were heartfelt and not automatic.

Unfortunately for the two or three people who said they would come, and did not, my attitude to them will be somewhat changed and it is a not a good thing for them at plot holders.  They will be in the unfortunate position of not being trusted. If someone says to me three times they are coming and this is not followed up how can I trust them again. I don’t care what excuse they give, it will probably be a lie otherwise they would have phoned beforehand or emailed afterwards.

Reading about the fires in Greece we have nothing to complain about but I noticed that the ground is cracking. Some of the local allotments have no water supply so goodness knows what they do during dry summers. I poured a whole bucket of water down one of the cracks (illustrated) and it disappeared without trace. 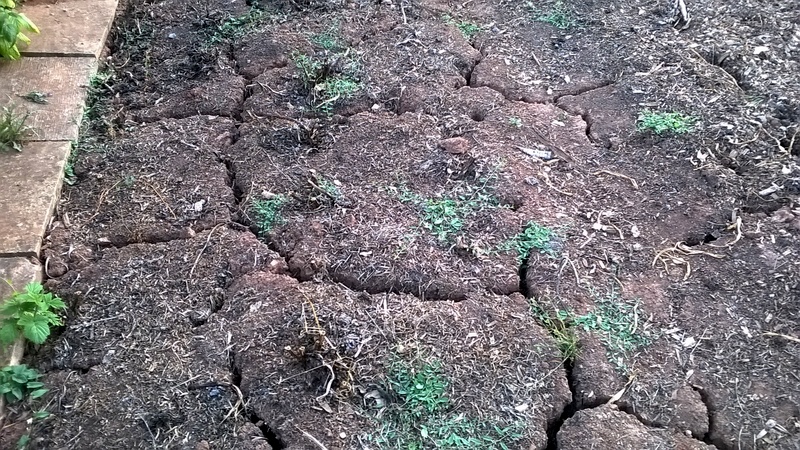 I am not sure what good it would do to moan at them in writing or verbally, maybe try another event and see what happens.