We spent most of the day doing the front garden of a woman of about 85 who was confined to a wheelchair but seemed cheerful enough and bright as a button but forgetful and bit autocratic. She had a live-in helper called Samuel who used to work for the gold mining industry in Ghana but the firm was bought up by a South African conglomerate and everyone was made redundant so he came to the UK. He was trained in agriculture and so was very interested in what I was doing. 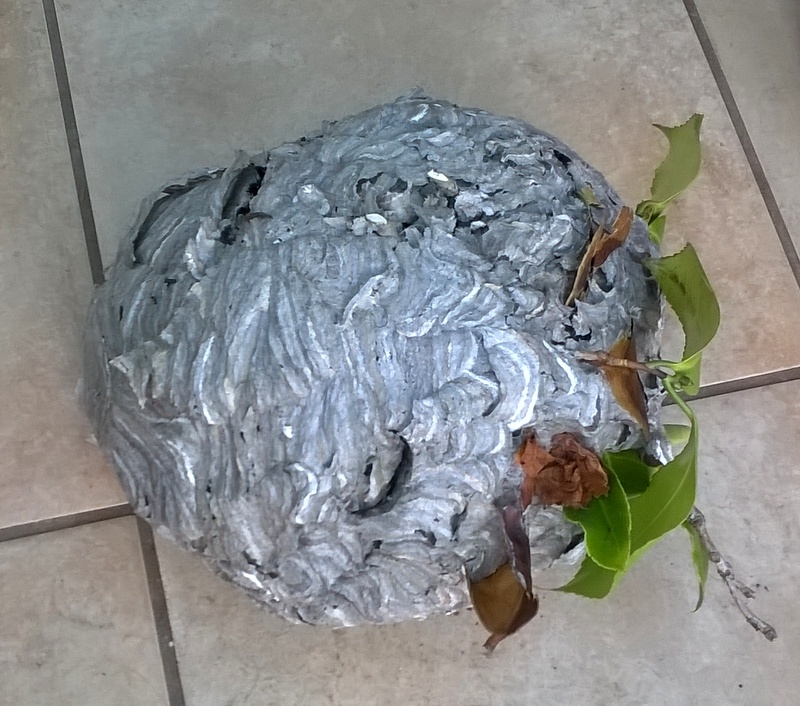 Whilst working in the garden, Francoise found an amazing wasps nest, now abandoned, made entirely from what appears to be paper. It is the size of a football and the wondrous subtlety of wasps harvesting paper combined with spittle to make an object of beauty is quite amazing to me.

We returned home to see  an amazing evening sky. I believe rain is due tomorrow.

I don’t have much more energy to write as I have been adding a lot to my 5G and Smart meter website and listening to a talk by Prof Martin Pall at the same time. He said that microwaves do irreversible damage to the production of sperm and reduces the vitality by 50%. At the present rate the population will be unable to reproduce itself.

PS Wasp nests are made of a substance similar to paper that the insects produce by chewing wood into a pulp and then sticking it together with saliva to form a honeycomb-type structure
With a mouthful of wood fibers, the queen uses the saliva in her mouth to break down the wood fibers until they form a soft paper pulp. She then flies her mouthful of paper pulp to her chosen building site to begin construction of the nest. Worker wasps help to form the soft paper pulp into multiple hexagonal cells
have a look at this nest
https://news.sky.com/story/wasps-build-giant-nest-in-womans-spare-bed-10391741