Today a cold and rainy start, a depression from the Atlantic (how depressing). Off to the men’s group for a breakfast which we have in the Somer Centre, which is right slap bang in the middle of the town. There were about 10 of us and we had a very nice meal to start the meeting with very good local sausages and bacon. It is lovely to have a meal without food additives.
A local Methodist minister was giving us talk about a training session that was going to happen over 8 weeks next year and had been developed for people who wanted to spread ministry in the local community.

Eight experts would give us different views on how to tackle the problem of communicating any sort of face, and I thought it would be a very good idea because all these people would be based in the secular world and would bring their own point of you. My own concern when numbers and that the group should not be drawn from the same group of people who meet each other month after month. I do not think enough cross fertilisation would take place especially as most of us are over 70 and would perhaps take an academic interest. We need men of 30 years and over I would suggest but these are busy with their children and their family in general apart from the business of earning a living. We shall see on this one.

I did have a small disagreement with people in the group about the venue for the next meeting. We had chosen Wetherspoon’s the new pub. I complained that the environment was was far too noisy and that food could not be guaranteed at a certain time where is where we are now we prepare all the meals and bring them on at the same time so the limited window for the speaker would be interrupted buy waitresses coming in. There was no space which was closed by a door so we would have to put up with the noise of the restaurant which even first thing in the morning would be noisy because noise travels. I wrote to the chairman of the group saying that if it was going to be in this pub I would not attend

Back home, passing the monthly farmers market where the attendance was well down due to the rain. Such a pity because we do need quality products to be made available to us that are not normally to be found in the local supermarkets much as I like Sainsbury’s and Lidl they tend to stop for small town thinking rather than the food that my wife has been used to.

Off to Frome, In the rain but it’s not too bad to have a look at a vegan Festival in the Cheese and Grain Hall where they have talks, music, exhibitions, you name it. I went to fill up my car on ASDA petrol, which sells it 8 pence a litre cheaper than local. I know it’s not an awful big saving but I get satisfaction out of getting more in my tank.

On the way we stopped off at a new bakery which bakes bread on the spot and serves coffee and cake and little bits and pieces to the trendy people who work in Bath and Bristol with their dutiful if worn out wives and exuberant children. They have an innovatory ‘breast nest’ for nursing mothers. Love it. 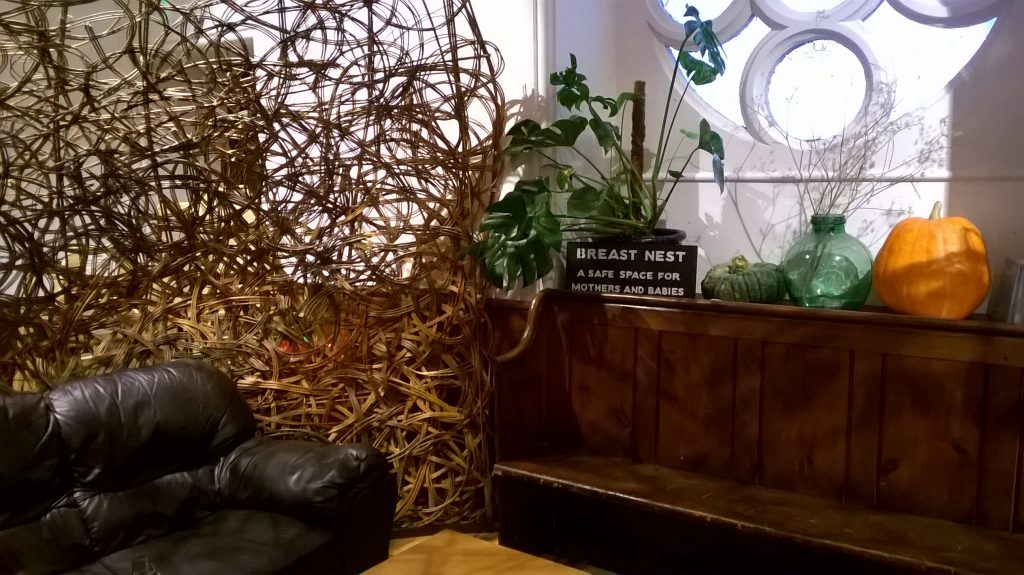 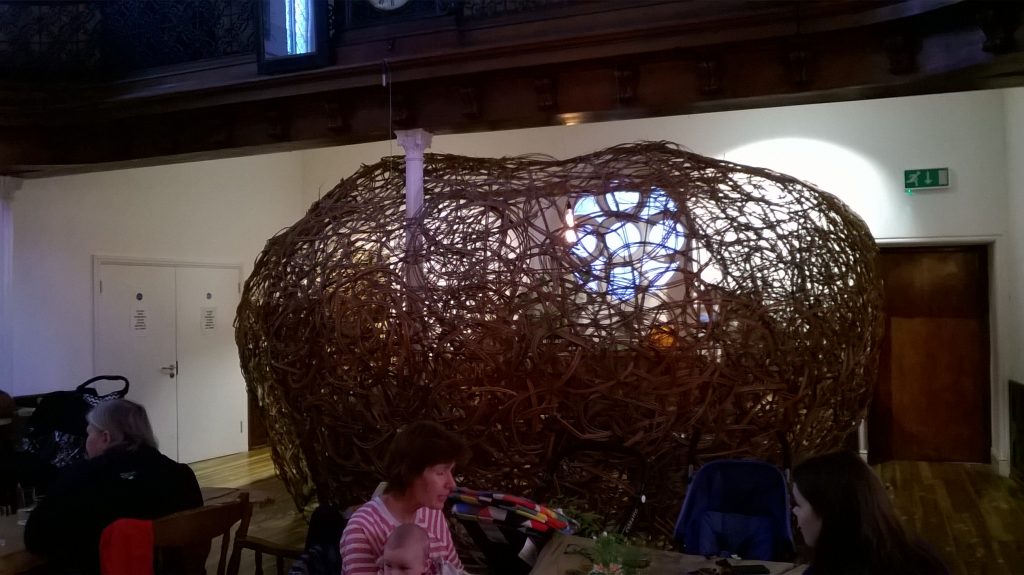 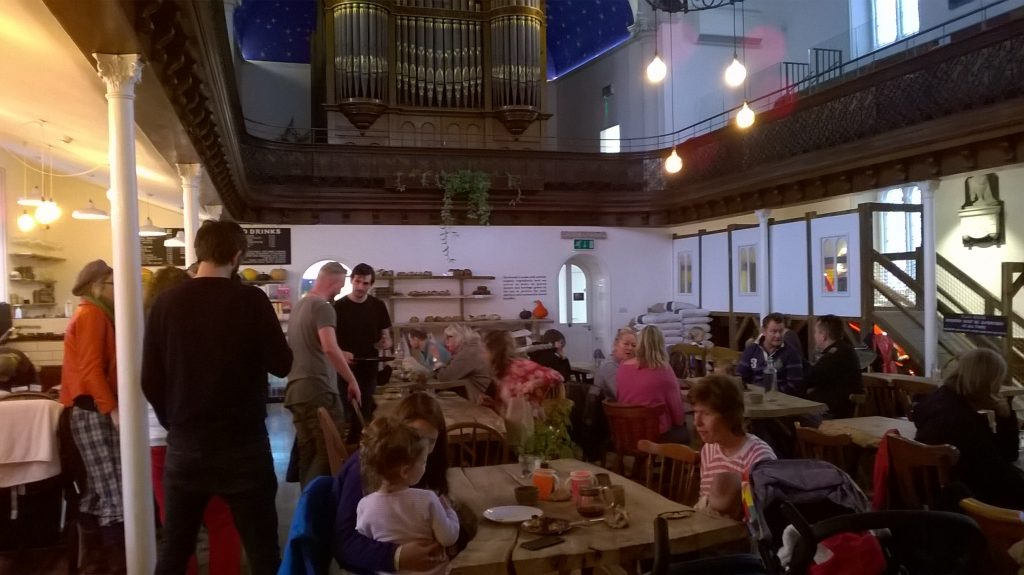 We then went along for a coffee to the Codero Lounge, another trendy establishment which did not look much from the outside, but was obviously a converted department store with many art works on the walls.  I had one of the beset coffees I have ever had, and the Australian waitress was glad to briefly chat with us. 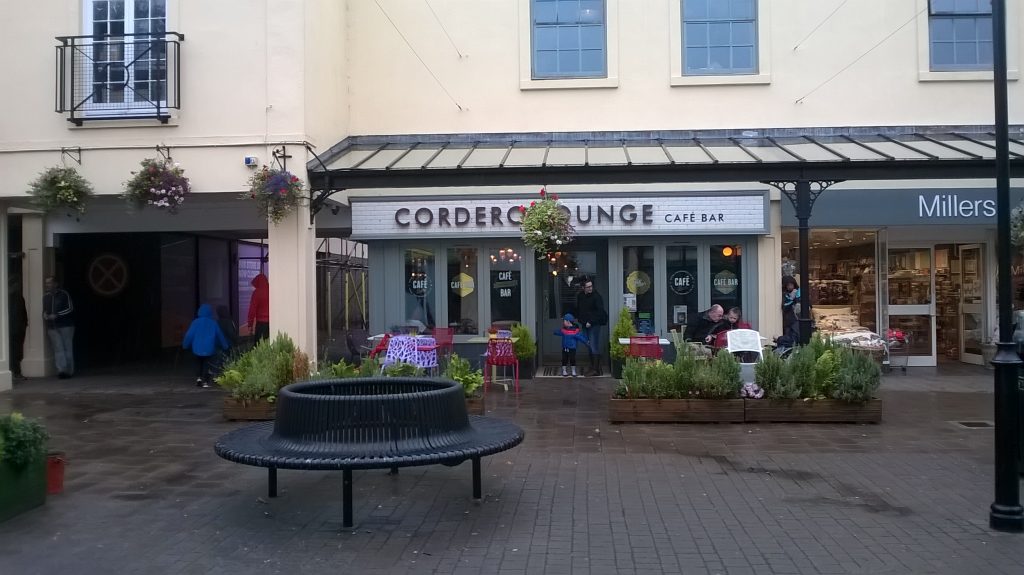 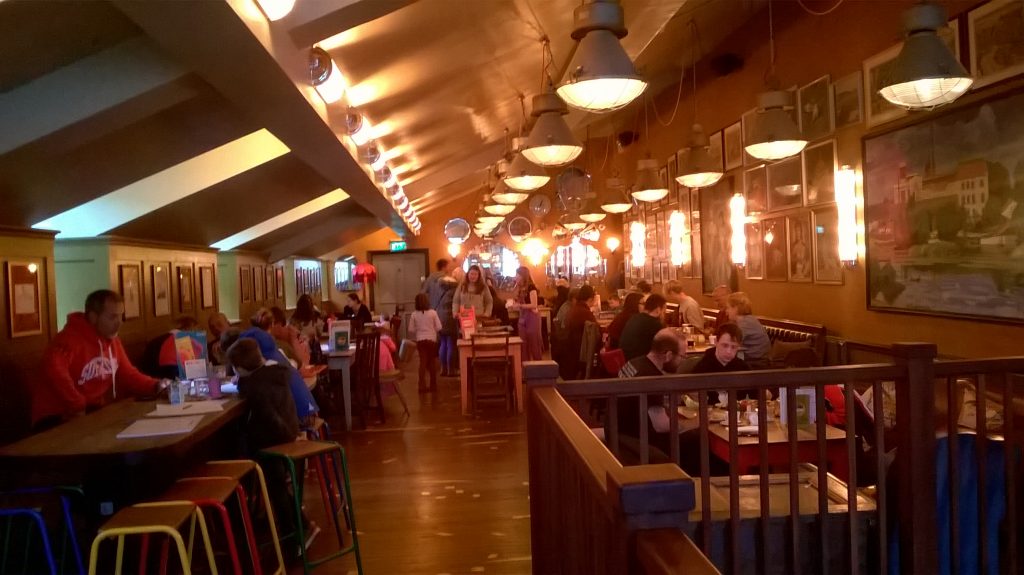 Off to the Vegan exhibition which I found incredibly dull. Francoise  observed that most of these stallholders were either English or European people married to someone of another country.   Out into the rain.          Off back to a jumble sale at the local Boy Scouts  in Radstock where they offer quite good clothing and bric-a-brac for 50p or £1.  The Scouts have a very good reputation in this area as I’m sure they do in most parts of the country. I think the best thing most parents could do for their children is to take their mobile devices off them if especially they’re under 12 and encourage them to join the Boy Scouts or Girl Guides. At the rate we are going, these children will make inadequate parents.
Next,  we discovered a new Polish shop, the famous Polski Sklep which had just opened in an alleyway on the main street.  I forget that the culture of Poland is entirely different and my attempts to smile and congratulate them on their arrival met with blank stares.   we spent about £10 on various types of food just as an experiment. The Polish are very good at soups, tinned fish,  and a very good drink called Kefir which is actually like yogurt.   I shall use it to calm my stomach.
Off to home, to a late lunch, and my ministrations with  my 5G website and this diary.
*****
If you want something REALLY strange, check out this video. It’s called ‘Mel’s Hole’.