So on Friday, late morning, we set off to make the two hour ride to our favourite hotel in Exmouth, which is at the outlet of the River Exe which goes via Exeter to the south coast. This is a 50 mile long river, whose source is near Simonsbath on Exmoor.  This is our fifth or is it our sixth weekend with Shearings, the company that owns the brand name, the coaches and hotels enabling them to offer a cracking good value weekends for £99 a head 3 nights bed breakfast and evening meal.  So that’s the commercial over.

Although we were promised diabolical weather, with wind and rain, most of it happened at night and it didn’t trouble us at all. We arrived 3. 15 and settled in. The routine at the hotel is exactly the same. Dinner between 6:30 and 7pm. This is followed by bingo, a quiz, and some music which is pleasant enough.

Some people are conveyed to the hotel by coach and there was the Geordie (Newcastle area) driver sitting next to us at the meals, very loud and very direct. I thought some slightly uncharitable things but my wife reminded me that being a coach driver is a lonely job, where you have to make difficult decisions on the go, and often have to work long hours. He said to me that once he puts his card in the engine he can only drive for 15 hours and then the engine is cut off or was it that warning sounds come

Going to this area is a bit like stepping back 20 years. The area is not big enough to commercialise thank goodness and much of the resort maintains it’s Olde world charm with restaurants attempting to make a living through the lean months when the sun does not shine and the wind blows.

Walking along the beachfront when the sky is inky black and the main sounds the crash of the waves on the promenade is an unusual experience and requires a certain amount of hardiness. It is however so delightful to get away from the sound of traffic and the site of every other person staring at their mobile phones. I made attempts to keep off my mobile phone as much as possible but in a way was still on duty so I had to deal with my messages once every so often.

The clientele of Shearings are 90% retired people or shall I say people of a conservative nature. Because the group is based in Yorkshire many Yorkshire people tend to come down to the south for a change. Yorkshire people have very dry humour, are very direct, and have a particular sense of humour which I have yet to figure out. The culture of the weekend is that you always chat to the person next to you knowing that you will never see them again. The atmosphere is bland and just right for couples who want to get away from the washing up and have a nice comfy quiet room en suite with breakfast and evening meal included. 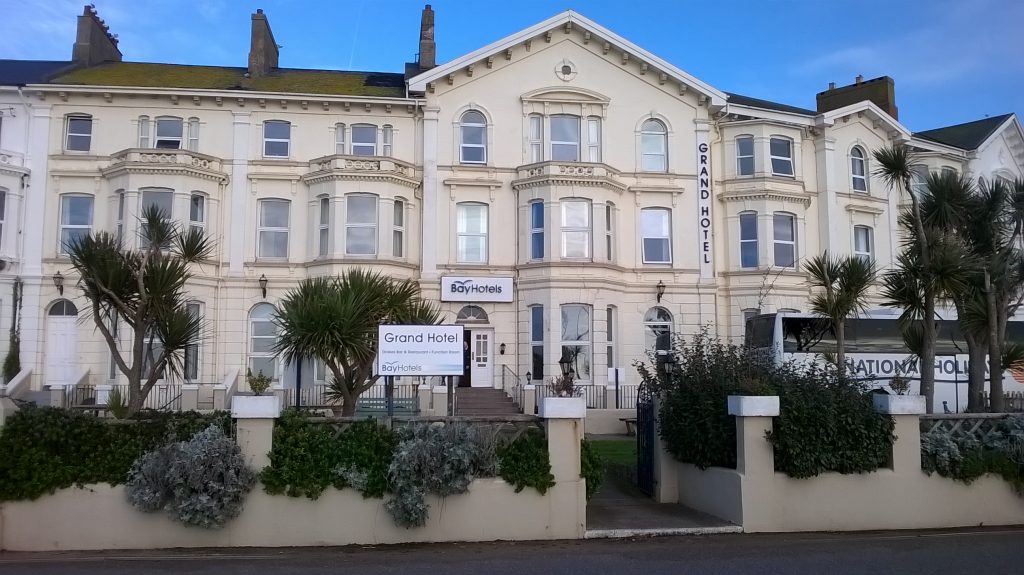 Friday afternoon we went to visit our favourite fresh fish shop. This is a shop like no other in that most fish are locally caught including oysters which to the Delight of my wife were in stock and on offer at £1.25 each. Being French, she loves them and I think she consumed 6 during our time there and then took away a further 6 to have in the coming days.

Saturday morning I took my tablet in for repair to a chap sitting at a small stall – apparently his office – in a local market, found it was working correctly after all, and ended up buying a laptop with Windows 10. NB Windows 7 will no longer be supported from April next year.  We decided to go to Sidmouth by bus, another bijou and laid back town but one that is lovely to walk around. We visited the local Museum and my did we get the timing right. We arrived within three quarters of an hour of this establishment  closing for the winter to open again at the end of March 2019. There was an exhibition of lace, many stories about the sea, incredibly lifelike sailors, a joy to behold. 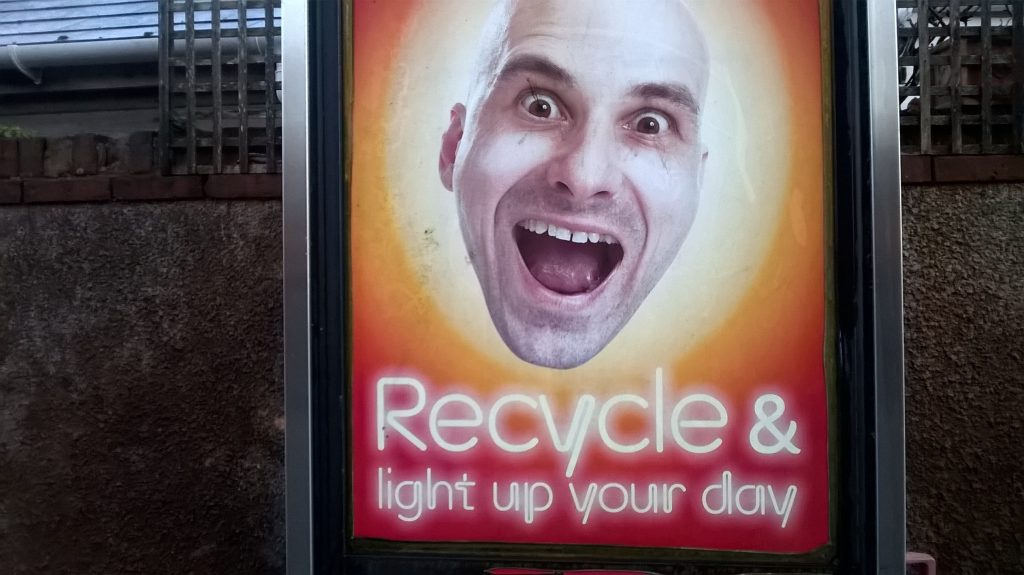 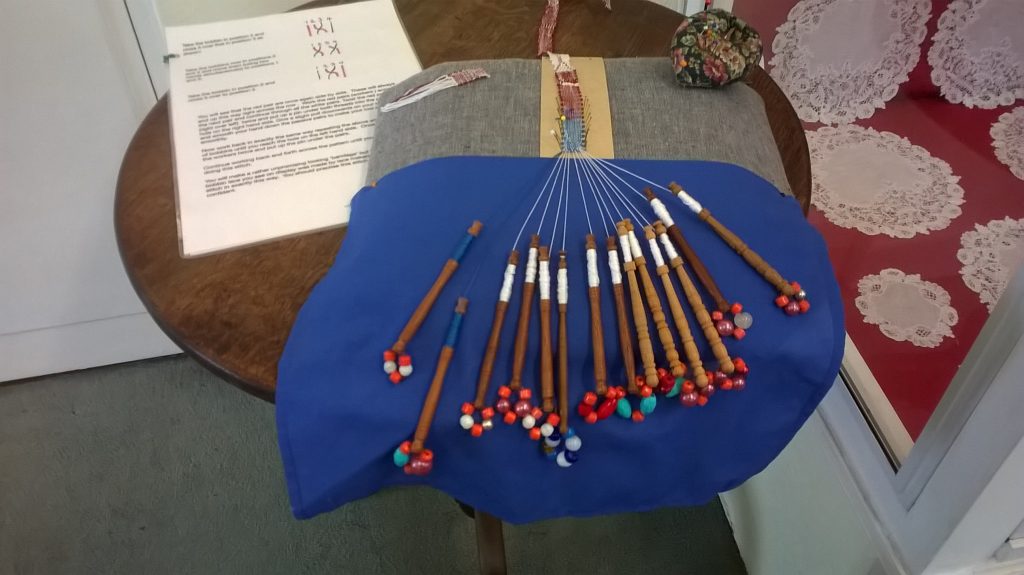 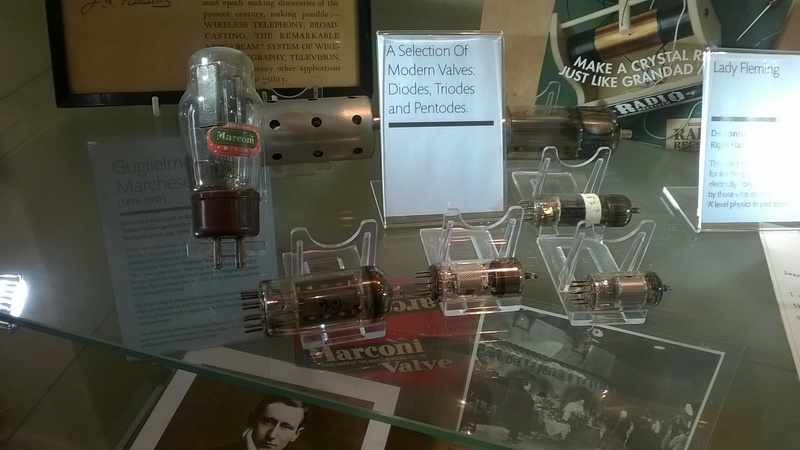 On Sunday we took the train to Dawlish via Exeter where four years ago the British Rail tracks that run by the sea were overwhelmed and damaged during the storm of the 8th of February 2014.  By great good fortune we went into a cafe specialising in gluten-free food and by further great fortune the owner of the cafe  had had some railway workmen in from the repair and they had shown him large-scale photographs of the damage.   For some unaccountable reason they left without taking their photographs with them so he was left with a little piece of History which he showed us.
Dawlish can be seen from Exmouth, it’s about 2 miles away across the river but because there is no ferry in winter months you have to make a 50 minute journey by train to go in to Exeter and out,  not that this worried me because I love train journeys.  On the way back a blind lady entered carrying what was a very large birthday present, I think it was a drone. The way she figured out which seat was vacant was by gently tapping with her stick. Eventually someone made way for her.  What courage it is to make your way to a big city, do shopping, and come back without being able to see anything. This is one more reason why I really can’t complain about my life when I see what others have to put up with.
I had some trouble with my stomach during this weekend. I have been troubled with acid for sometime but it’s come to a peak and I realise that I’m completely intolerant to acidic foods so out goes milk, cheese, tomatoes, some types of bread, coffee, some types of tea, most meat, and definitely no sugar and in comes greens, bananas, melons, rice milk,  and  a new range of food but I must still come to terms with. I realise how much I’ve abused my body over so many decades and I’m quite intrigued to know how it has suffered for so long without major complaint.

We managed to keep brexit at bay but everywhere it is,  so there is no escape. People talk and then groan.