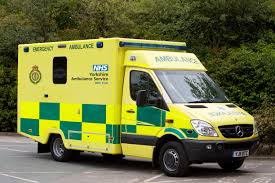 Calling 999 twice within four days does not happen.  Well, it did happen in my case. On Monday morning at about four o’clock I woke up with a stomach pain. Not the normal acidic pain but a heaviness and bloatedness that would not go away in spite of my taking medication. I write this, not to bore you to death, but to remind you that anything can happen at any time with even very healthy people because your body has triggered that something is amiss.

I felt so sick and debated whether I should tough it out or call the ambulance but in the event I called them at about 6:15 AM. A very calm lady – several hundred miles away in the Devon call centre – took down my details and asked me a lot of questions which determined the priority of my call. A cheerful man and woman team arrived about an hour later and set about doing my bloods and taking an ECG. They had a good feel around my stomach but couldn’t find anything so suggested that to be on the safe side we ‘popped down’ to the hospital.

I was quickly wheeled in and because it was not busy we were found a free cubical straightaway. From the moment you enter the hospital facility you are logged in. Things have to happen in a certain order. First, the nurse arrives to do the basic tests and make sure you’re comfortable then there may be a considerable pause. In my case the pause was because my bloods were sent away for analysis. It’s not as if they were unaware I was there. That is why it is a good idea to have someone with you and possibly to bring a newspaper or a novel, something to keep you distracted. If you think about it, the system has to be good otherwise chaos will ensue. Those of us that have seen TV accident and emergency programs tend to forget that there is such a thing as editing, and also tend to forget that the producers focus upon dramas rather than times when nothing happens.

In my case, the very young doctor turned up (it shows how old I am that she seemed young) and had a chat with me about my condition. I gave her something of my history; she went away and made several calls on my behalf including the endoscopy department where I was waiting for a stomach examination. She was very friendly and there were no ‘us and them’ barriers. I told her that the most important thing I wanted was the correct attitude to where I was going and particular that not knowing what the problem contributed to the body tension which cannot help any condition that is trying to heal itself.

She totally ‘got it’ and we agreed a plan which consisted rather boringly waiting on the results of the endoscopy, and maintaining the proton pump inhibitor pills which would get some sort of physical stability with which any other symptoms could be considered.

We were there about three hours and by the time we were discharged at 11:15 AM, it was time for an early lunch so off we went.

Much later on in the day, about 7 PM,  the consultant from the endoscopy department called me to discuss an early appointment and she told me that there was a new type of endoscopy device which was smaller than the one that gave me such anxiety (I hate having things stuffed down my throat) and suggested that I become part of this. I accept it with alacrity.

I am coming to the opinion that if you get a doctor to call another doctor about a problem you will get more attention than if you ‘cold call’ as someone who is on the waiting list for a particular intervention.

Sometimes, things had to become a little bit dramatic before anyone takes any notice but then I guess it’s the same with me in my dealings. But there is absolutely no point in being objectionable or complaining because they are professional people are these doctors and nurses and they do what is necessary in a timely manner. Being obnoxious will mean they just go through the statutory motions and will not go the extra mile.

So back at home and much comforted. I take the view that so long as I learn from something a little bit of pain and discomfort here and there is the price you pay. So be it.