This morning I went off to give my lawnmower an outing after three months without work; it spluttered to life at the 10th attempt. I mowed the central avenue in our allotment. (below) 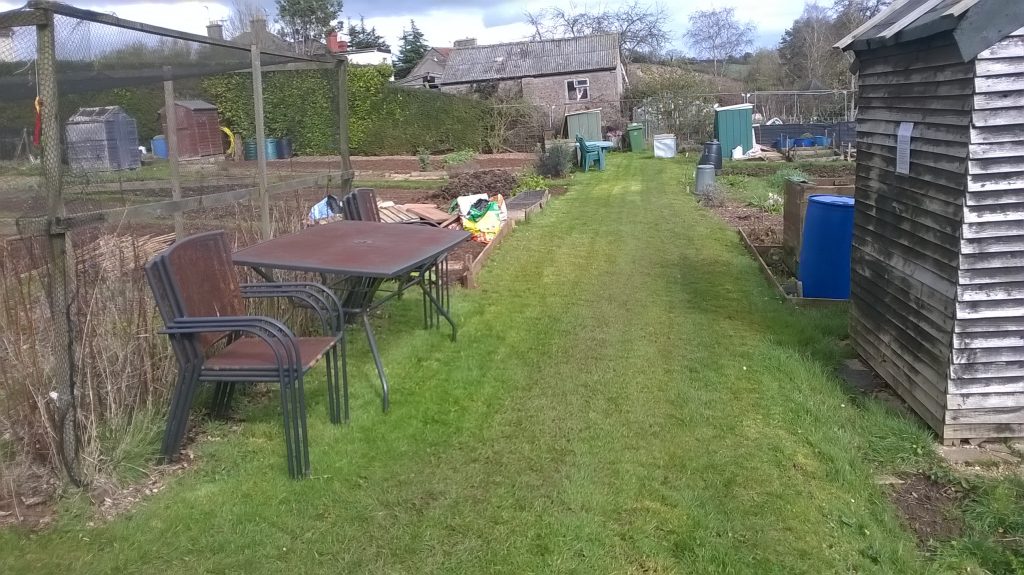 I have just been for an acupuncture session to unlock numerous points around the shoulders which was so tight that it felt like they had been that way for years. I also found that after my accident over two years ago when I broke six ribs that the ribs themselves had healed but not quite in symmetry and so the muscles between the ribs were mis-aligned so this had to be dealt with as well.

I asked My acupuncturist how it was when treating women. Were they shy? He said that the older women were quite good and appropriate in their behaviour but the younger women had no inhibitions about taking all their clothes off even when that was not a .requirement. He told me that the therapists were worst at this. He did not feel it was fair on him since he would be distracted by for example large breasts or other appurtenances.

He told me that even men strip off when they don’t have to. I would certainly not do that unless it was necessary for example in the case of a medical examination. I remember that in the 1960s everybody stripped off and had sex and thought nothing of it and there were the most outrageous therapies but now I thought things had settled down a bit and I thought people were perhaps a little bit more modest but I’m obviously out of touch. My acupuncturist tells people to keep covered up at least as far as necessary while he gives his excellent two hours worth of systematic and gentle treatment.

Maybe it is a cultural thing. I know that Germans have to be persuaded to keep their clothes on especially when playing sports outdoors. Frankly, I find the average human being very attractive what with the floppy bits and wobbly bits I think I’d rather see people clothed. In Scandinavian countries everyone has saunas together in the nude the boss and the employee. Again, I don’t get it.

He warned me that I would feel whacked due to the change of energies. In other words if a meridian is blocked, energy cannot flow in the way that it is designed and a lot of energy goes to compensating for this. When people come to me for treatment, I advise that they do not engage in any social activity or drinking in particular and have a quiet evening in order that the body may be given time to adjust itself.