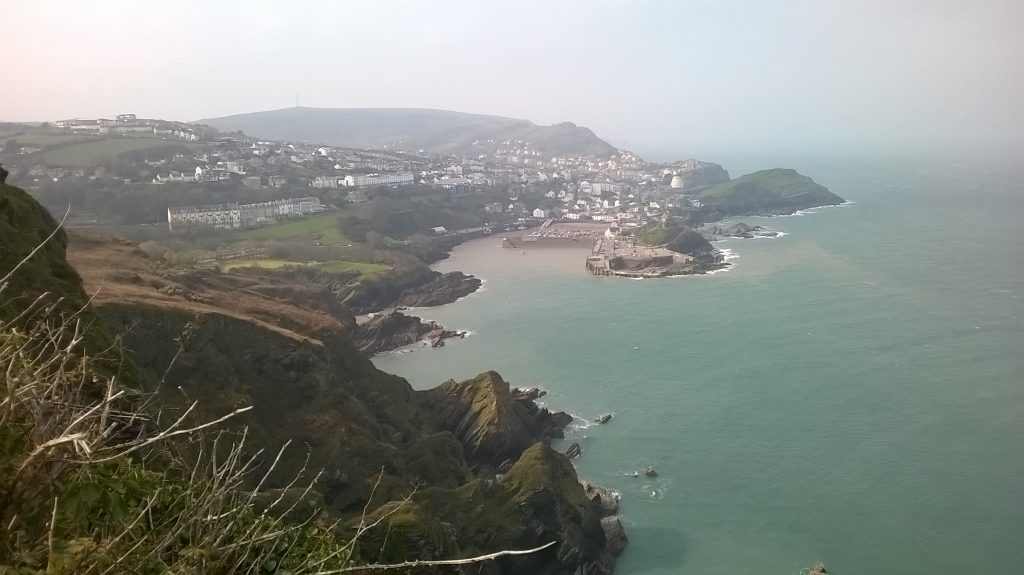 This is overlooking Ilfracombe. There is a path that goes all along the coast. Although distances look insignificant when you see them on a  map it can take you 30 minutes to go from one small feature into another. This is us after about half an hour walking. When I say ‘us’ I mean the view of the town.

We took it easy and visited an adjacent collection of holiday chalets. Costs are quite stratospheric in the high season but you can get a week’s stay for between £600 and £700, extra if you want a Jacuzzi. I am disenchanted by seeing advertisements for free Wi-Fi because I don’t particularly want to get frazzled while I sleep.It is bad enough using my computer for writing these diaries.

We returned to the town and decided to pop into a local pub where I met a chap who worked in the agricultural industry in Lincolnshire. This is the cereal capital of England. We stayed there once in August and day and night the harvesting machines were in action. The chap who I was speaking to was preparing for his time over the season where he worked from 6 AM to 10 PM seven days a week. He had no interest in going abroad, did not even have a passport, and knew more about the UK then most of us and said they hadn’t explored more than a small portion of it. I could resonate with him in that I’m fed up with airport queues, being searched for non-existent contraband items, and having to have a holiday when you get back from holiday because of the stress.  We had a very entertaining half-hour or so exchanging stories and then off we went on our separate ways.

In the afternoon we saw a wonderful film called Fisherman’s friend which was a film made in Cornwall, a feelgood film, which I cannot recommend highly enough.

In the hotel, no bingo or entertainment. A few people already left because they had a two night deal because they had to get back to work (you pay £10 for an extra night).   I was quite happy to sit reading. Tomorrow morning, Monday, we shall try and make as much use of the day as possible by visiting features of the way home. I’m glad to say that the weather forecast is good.