A cold morning with the rain threatening. I decide to go for my normal coffee morning at the church and Francoise decides to go for a walk with a local rambling group. It is interesting how the coffee mornings, held in my local church, go. Things always start slowly. A dribble of people arrive. We sit around not saying much.

I started a conversation about clotted cream because the organiser of the morning (5 ladies do it on a rotation basis) had been kind enough to make some scones with excellent cream and jam. I said I’d recently been to Devon and there I experienced the most wonderful cream in that part of the country. This encouraged people to reminisce about the old days when raw milk was issued and overnight a layer of cream had appeared on the top.

We then discussed Shearings holidays and I told them about my trip to Ilfracombe. This prompted reminiscences again of other Shearings venues that people have visited. More people joined us, complaining about the cold and damp. I then met a lady who is a Foot Health Practitioner, Kate, and we talked a lot about patients and how you mention or don’t mention your Christian faith. We discussed the importance of a personal relationship and chemistry with the customer or patient. Kate shows her diary to God and asks him to fill it because He knows who needs her help. I said that I trust that the right people are introduced to me.

I find the therapeutic value of having a foot massage is amazing. Feet and hands are most important and this is reflected in reflexology and hand massage.

Along comes Chris, who is a schoolmaster, and is shortly to assume responsibility for the six form at his local school. I asked him if he had had any  problems with his pupils using mobile phones. He said the school has a very strict policy of not allowing any child to have a mobile phone. They are locked away in the library and given to them when they leave. He thinks the problem of teaching would be much more difficult if the pupils had access to such technology during the lessons because people would wind each other up while in class. I responded that in a genuine emergency, the child could go to reception and call his parents via the normal landline, and the parents could call the school if there was a difficulty at home so who needs mobile phones anyway. Chris said that an excuse offered was that they can do their research straightaway. This is specious indeed since 90% of the time they would be sending meaningless messages to each other.

I also met a carer, a nurse, who worked for the Leonard Cheshire homes for 20 years. Leonard Cheshire was an air force man whose young brother had been injured in the Second World War and he felt that some type of rehabilitative facility should be offered. The first person he put up lived in his house in the spare room and it grew organically. He later married Sue Ryder of the Sue Ryder trust. I love hearing stories like this. It grew naturally and in the family and human way.

I got a little note from Chris saying that there will be a Christian Aid Quiz at the local Rovers Football Club in Paulton On Friday, 24 May. I shall definitely go. Even though I’m useless at quizzes I enjoy the occasion and get the occasional correct answer.

Off to the Royal United Hospital in Bath for my monthly eye injection. I thought I would get away without one but the examination revealed slightly more water in the layers of the eye. I had some interesting experiences in the waiting room. There was a chap who was deaf and dumb, and had a little sight. He had come for an examination like anyone else. He was accompanied by two helpers, one of whom communicated with him by lipreading but the other one used a strange method which looked like Braille applied to the hands. I am told it is ‘tactile sign language’. The helper tapped all over his hands front and back. 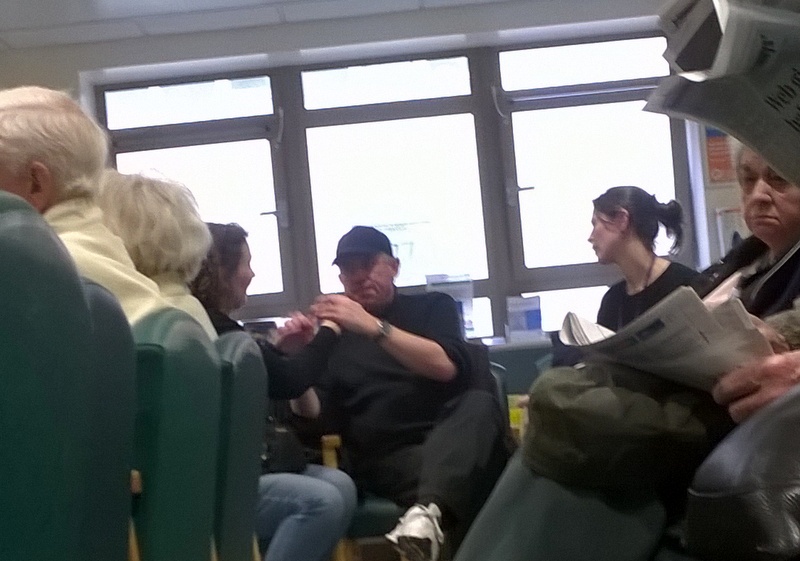 There are many interesting methods including Tadoma, where a deaf blind person places their hands on the speakers lips, jawline or neck in order to feel vibrations. Anyway, the three of them were very jolly and laughed a lot. The chap in question made noises – a little bit like a dog barking, some grunting, some strange sounds that I couldn’t really classify. I suppose if you’ve never heard yourself speak, you don’t know what you are uttering and so the brain cannot learn due to lack of feedback. Probably in his own mind he was making perfect sense.

Often the vocal chords have been damaged or not fully developed so the person cannot articulate sounds as we do. 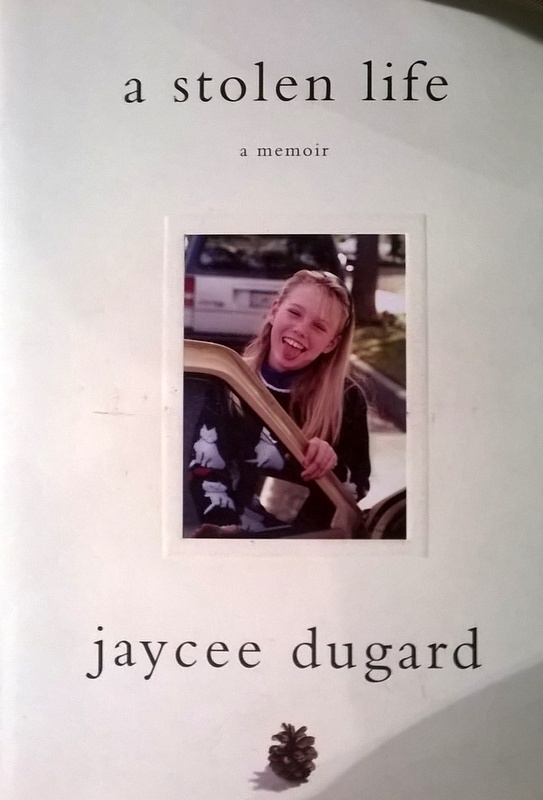 Whilst waiting, I chanced upon a book – one of those exchange deals where you bring one and take one. I sometimes think books find me, I don’t find them. It was about a girl in America who was kidnapped at the age of 12 by a sexual pervert who used her as a sex toy and kept her prisoner for 17 years. If she can bounce back after that and write a book then there is hope for us all. Conditions in the world are dreadful and monstrous but the human spirit can conquer all if there is a lack of self pity. Self-pity is one of the deadliest of deadly sins and kills your spirit stone dead in my view.

After some time, I was called for my initial examination. The person who saw me was called Jo.  She was the person I first met when I started this course of treatment two-three years ago. I reminded her of this and she wondered whether that was a depressing fact.  I said, jokingly, that this is an opportunity to get paranoid.

Back to the waiting room and another wait. The specialist showed me how the water in my eye was increasing and showed me historically that it was the same increase of a certain  pattern as in December. I do find it very satisfactory to be shown things more than being told something because you can see with your own eyes and understand it at another level.

It is easy to spot first timers. They print out all the instructions to get to the hospital, they look at their watch frequently and complain that the appointment is 10 min late. If I really get irritated by such people’s complaints I tell them that they can go privately if they want and pay about £1200 for the privilege.

The staff at the eye unit are very happy and jolly. It is a very good spirit of teamwork that prevails. The pressures on them are enormous but they survived with good humour and laughter. I tease everyone as much as I possibly can including the staff and fellow patients and tell as many jokes or dreadful puns as I can think of.  People are under stress although they don’t show it; anything I can do to lighten the load is a good thing I feel.

I did my usual wander down the corridors. There must be 500 pieces of artwork; they are changed on a regular basis. 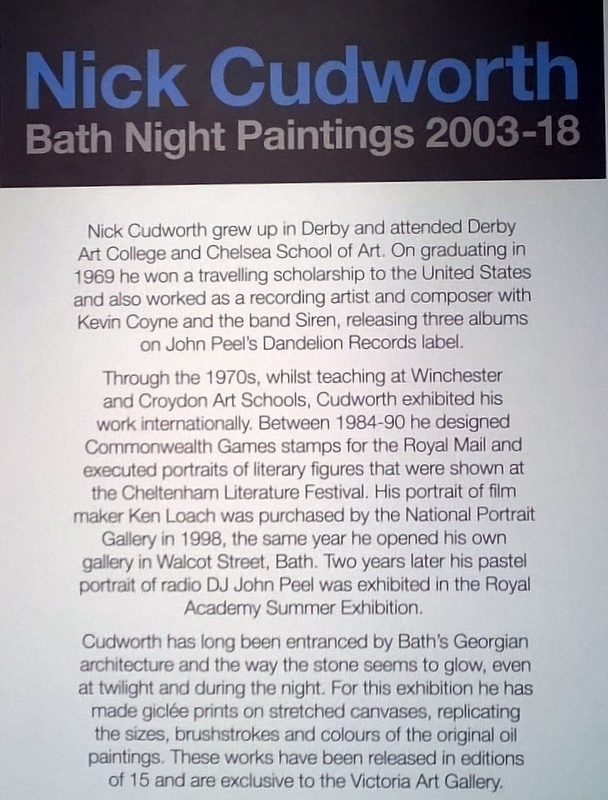 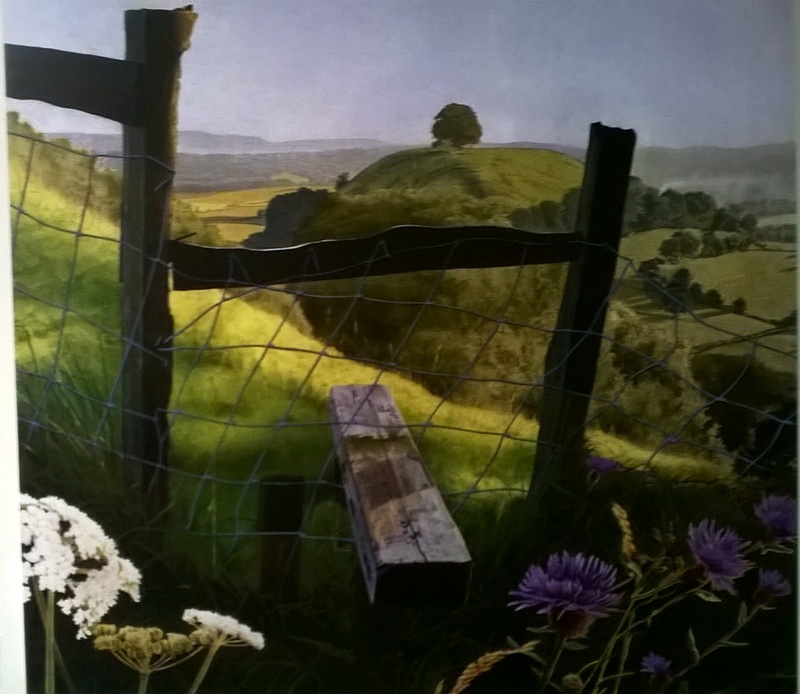 The Powers That Be are always dreaming up new ideas for attracting funds, this is a very positive one, not begging at all but trying to share a dream 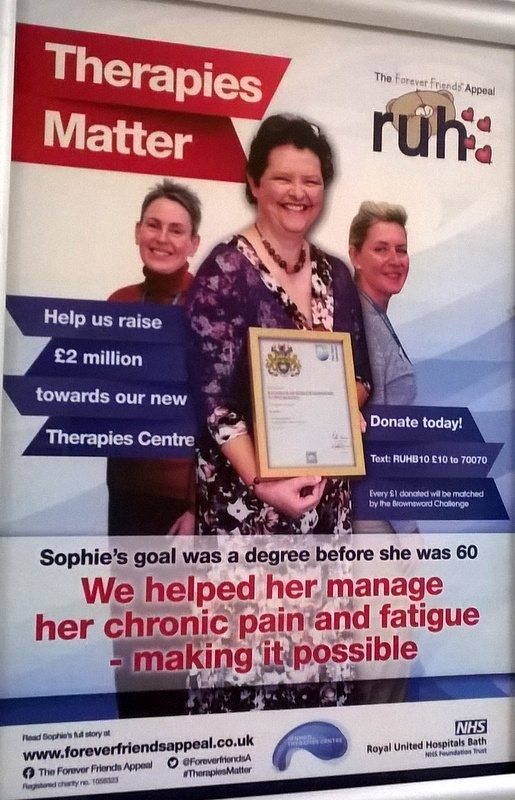 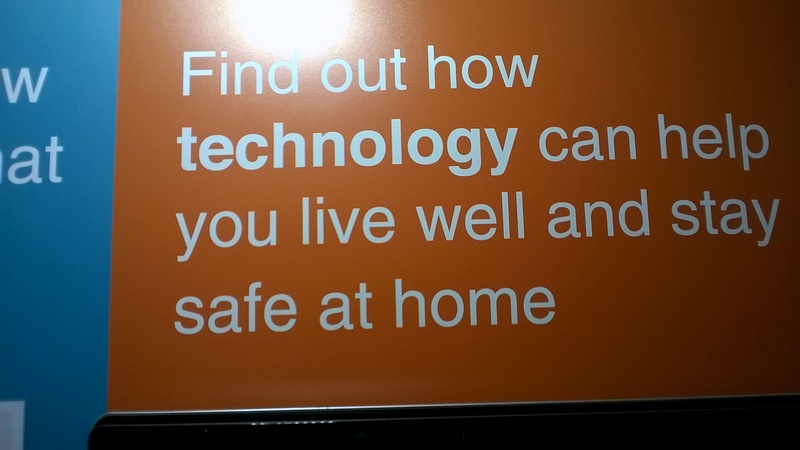 This was an ingenious touch screen TV where if you touched the information points it showed how someone had developed the device to help less stable people in the bathroom. 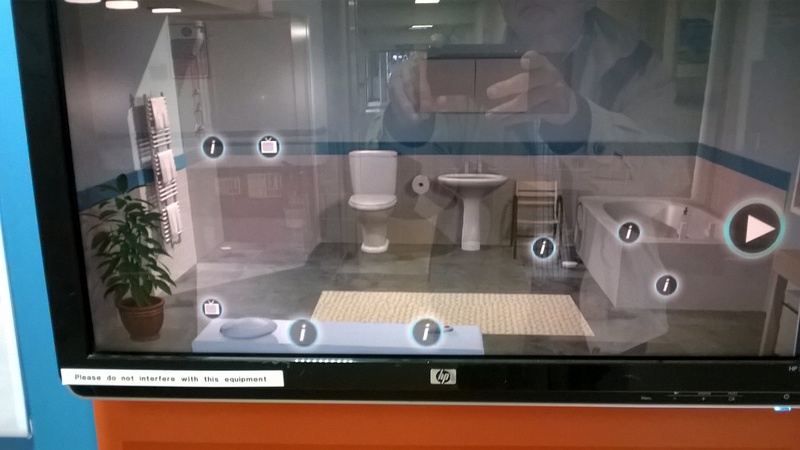