Just for a change, I wake to a clear blue sky.  It is still cold though. I was listening to a rare attempt on BBC today radio program to present both sides of the vaccine argument. Of course they ended off on a skeptical note, ‘science versus belief’ not mentioning that most of the quoted studies are industry funded. The name Andrew Wakefield came up. He was vilified for daring to associate the NMR vaccine with autism so I decided to look him up again on YouTube and was very struck by his factual and transparent discussion at a recent talk of the whole matter. It is always the same with any hidden agenda matter be it 911, global warming AKA climate change, cures for cancer. It is the official party line plus the mainstream media versus the lone (tin foil nut) campaigner.  If you have time or the inclination have a look at this talk and form your own opinion.

So off we go to Glastonbury, Chalice Well no less. I’ve lost track of the number of times I’ve been but every time we go it is a positive and enjoyable spiritual experience.  We approached at 11 o’clock an hour before the meditation but already there was a stream of people going in and I realised that this was meant to be a packed house. This is normally a peaceful garden and on this occasion I found the crowds a little bit too much. Everyone is dressed for the occasion particularly the ladies who bedecked themselves with flowers, wonderful voluminous costumes and religious artifacts.

I met a couple sitting on the slope at the top of the gardens. They seemed friendly enough so I opened a conversation. They had lived on the Somerset levels for 76 years but this was the first time they have ever visited Chalice Well. The man said that his father rented the tor area for grazing his cattle for a period of one year and says it was so strenuous going up and down the hill, rounding them up etc. that one year was enough.

I had another conversation with a lady was doing a massage on her friend. I commented that it is very important for us to look after ourselves and I said that men tended to be a bit disconnected from their emotions. She agreed and said that women were definitely better at supporting each other.

With some friends we went into town  and did our usual route of the organic food shop, sitting on a bench eating sausage rolls and then going to a cafe for the most delicious cakes and coffee.

We then went to my beloved Goddess centre and in the Red Room listened to the most amazing Indian music which gave me a wonderful boost for my heart. Halfway through the session, a woman came in in some disorientation and decided to lie across two or three of the seats in the central area and sleep. She then woke up, made some notes in a little book, and proceeded to text someone.

I felt that this place was entirely inappropriate for using a mobile phone especially when I consider what I know about the radiations from them. I made a loving and concerned complaint to the management. Whether they did anything I don’t know but I make my point. Next time it happens, I will complain to the management and then speak to the person directly. I have the highest regard for the Goddess centre. I have referred to it before  in these diaries so you can Google it if you want.

No doubt about it, Glastonbury is a strange and weird place but it does attract a lot of nice people with whom I can communicate. You need to be a Red Pill person (Ref: The Matrix) or someone seriously into paganism, spirituality and the worship of mother nature. On the way out we passed a lovely bed and breakfast establishment with excellent  flora outside. 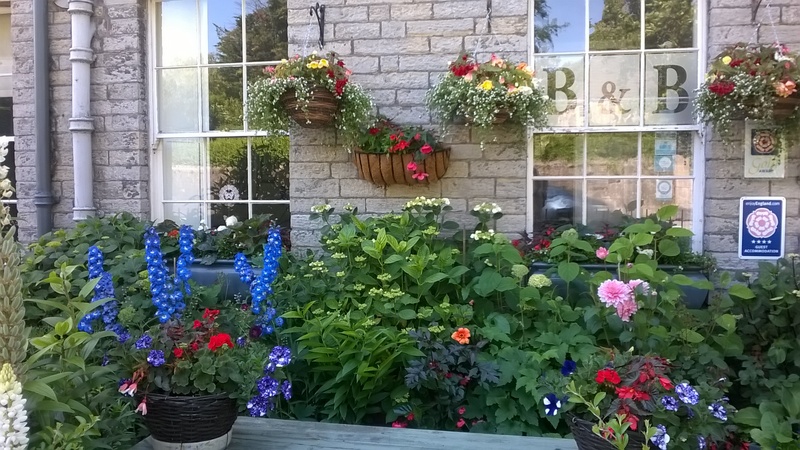 Glastonbury Festival opens in a few days and already lorries are going to and fro and all the distinctive yellow signs of the AA are up. Glastonbury becomes a temporary home to over 200,000 people who have to live eat and breathe and perform the normal functions so this is a major operation. We shall see what happens with 5G, whether the protests are a damp squib or whether something happens. If you remember, Glastonbury is going to be used as a guinea pig for 5G. See my companion site.

Whilst I was in Challice Well I did speak to one of the trustees who very bluntly said that this was not interesting to him;  he finds that 5G Sparks discord and did not want to talk about it. I talked to another trustee called Robert Ward and he told me that they had been asked to sign a petition against 5G in Glastonbury. He had unfortunately lost the papers when they came to pickup the signed documents and felt rather bad about it. He explained that they could not really sign as individuals because they were working for charity and someone would have to sign on behalf of the charity in order to be constitutional.

On the way home we stopped in at Aldi and I bought a 4.5 tog duvet for £9.95 for use in the summer. I also bought some shorts for leisure use only. I have a very bad habit of using them for gardening and of course wreck them in the process to the displeasure of my wife.

A lovely evening with the birds singing, the sun shining. I am one week into my alcohol-free regime as recommended by my doctor and I frankly do not miss it at all. Every time I think of having a glass of wine I go to our new water filter and had the most delicious clean water which has no side effects.

Today I quoted for a garden job at £500. The lady said to me that £500 was the sum that she had envisaged so we were rather pleased with each other.

Today I’m starting to prepare for a talk I’m going to give Tuesday week on the topic of 5G. I may publish it in full in this bulletin. I find that once I start, all sorts of ideas and images come into my mind and before I know it, the whole talk has presented itself to me and I just type it out. In other words, it is not a laborious process.

I am reaching the milestone in my diaries. Dostoevsky’s War and peace has 587,287 words. So far, this diary has 542,281 words. In two or three months time I will have equalled the record of this historical monumental volume which pleases me much.  Samuel Pepys was reputed to have written 1 1/4 million words but that took him 10 years.   This is an absolutely formidable achievement especially as you remember that he did not have the benefits of ‘speech to text’ dictation as I have and wrote for the most part in candlelight. Pepys wrote an average of 350 words per day.