I’m just going to sit down down to watch the film “Wild” with Reese Witherspoon who in the film took the Appalachian Trail. I meant to sit and watch it much earlier but I got sidetracked by Youtube.  “The six worst falls off balconies”, “the 10 most dangerous beaches in the world”, “Road crashes in Russia”, “people being attacked by elephants” and so on. Youtube knows exactly what I like. Pity they are censoring things left right and centre at the moment. What is wrong with natural health?

This morning we finished the job for a very grateful woman. We love renovating gardens that are a complete mess. In many cases there is a medical reason. In this case the wife was active but the husband had a hip problem and could not move and eventually got so chair bound that he did not want to move. 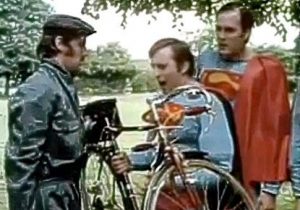 I was the equivalent of Monty Python’s “bicycle repair man”. I will do anything that is necessary to make a garden tidier even  including cleaning drains which is more satisfying than you might believe. My favourite jobs are hedge trimming, definitely OCD in my approach, mowing lawns and jet washing.

The lady was so pleased that she gave me another 50 quid on top of my quote, totally unexpected, and asked if even that tip was enough. I said it was and thanked her.

On the 5G front, I notice that this matter was discussed in Parliament, not the whole parliament but in committee. I immediately put this on the homepage of my website www.5Gexposed.com  Things are developing by the week. I heard someone was vomiting blood after having a couple of pints at Glastonbury and wondered whether this was due to the effect of 5G. Tuesday, I’m giving a brief talk in Frome, and I shall probably publish it here as well as on my other website. I’m not doing a printed copy because there will be so many links that hardcopy would be very demanding on people’s limited time. These days, you have to make things simple for people.

So I have this rather snooty lady ring up asking me to cut her lawn. I asked what had happened to her present gardener – it’s always a good one to ask to see the history. In this case, the husband had died two years ago but sometimes gardeners leave either because they leave the area or because not enough money is being offered. I have mentioned this before so I won’t drone on about it but anyway there was something about her voice that told me that I would not relate to her.

She sounded a bit superior and told me that mowing the lawn would be good exercise for me. I did retort during that brief conversation that I did not need to be told about the therapeutic value of work.  I did call her back twice to see whether I could go round to have a view but she was not there so I decided to leave it. As I have said previously, if things start badly they normally go on badly so folks just ‘wash your hands of these things and don’t push against the river’ is my advice. In short, listen to your intuition.