Our local conservation group meets from time to time, and this time it was an annual walk. It was slightly unimaginative in that it was a walk up and then back along the rail tracks run by the Midsomer Norton railway society. However, the weather was so good that it was a pleasure just to be  outside, enjoy the gentle breeze and look at the clouds scudding across the sky. People were moving so slowly that I decided to set off on my own. I had a chat with one or two people, nothing earthshattering, but pleasant enough and catching up on local gossip. 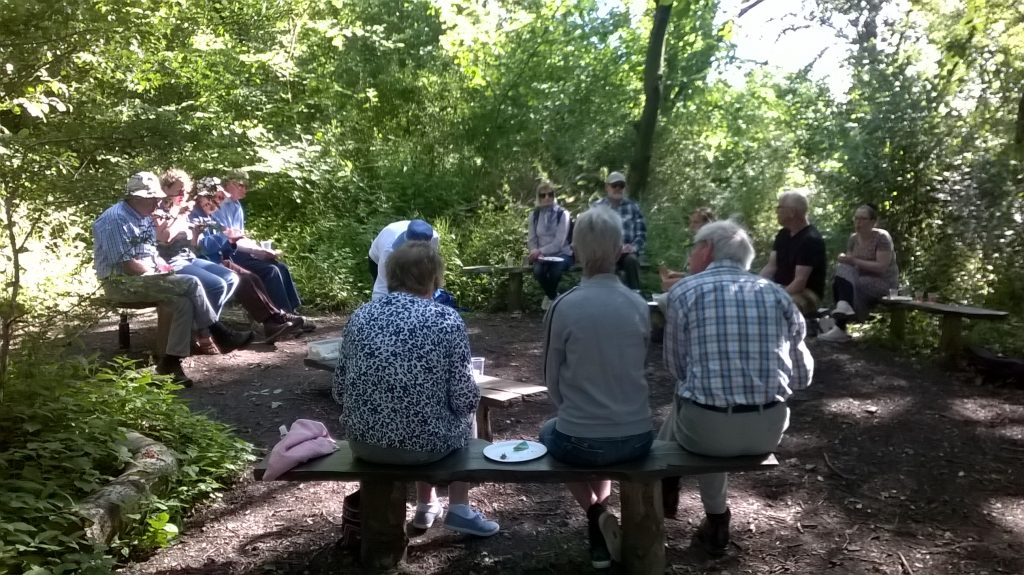 We went back to the woods and shared some very nice sandwiches, cake and soda. I met a mother on her first visit to the group, the lady on the far right of the picture, who home schools her children. We started talking about mobile phones and she told me that when friends come to play with her two boys they have to leave their mobile phones at the door. She allows only very limited use of the phones and we discussed under what conditions it was necessary for the child to have one at all. The mother said that when they went out on their own she wanted them to have the means of reporting back if there was any trouble but said that in general she encouraged her boys to talk with each other and play. Since there are virtually no red telephone boxes left that is probably a good idea.

I found them very happy articulate young men  It slightly inhibited or maybe shy and it was a pleasure to meet the family. The husband was a carpenter who works throughout Somerset and didn’t know from one day to the next way he was going to be sent.

To home, to find that a job that we were looking forward to had been cancelled because a neighbour of the potential customer had offered to do it instead. On the other hand the job that I thought was very small turned out to be quite substantial so things have a habit of turning out all right in the end.