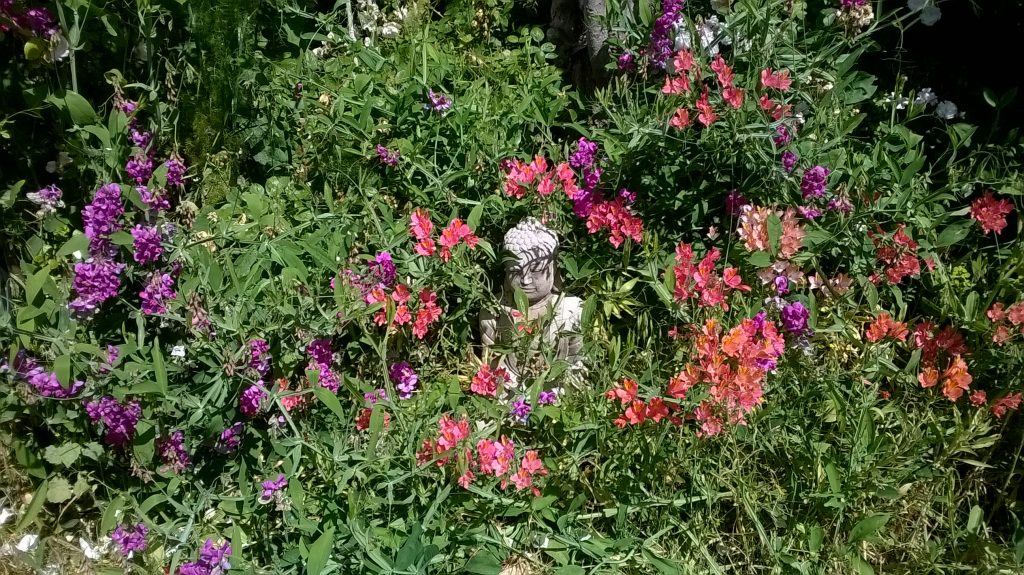 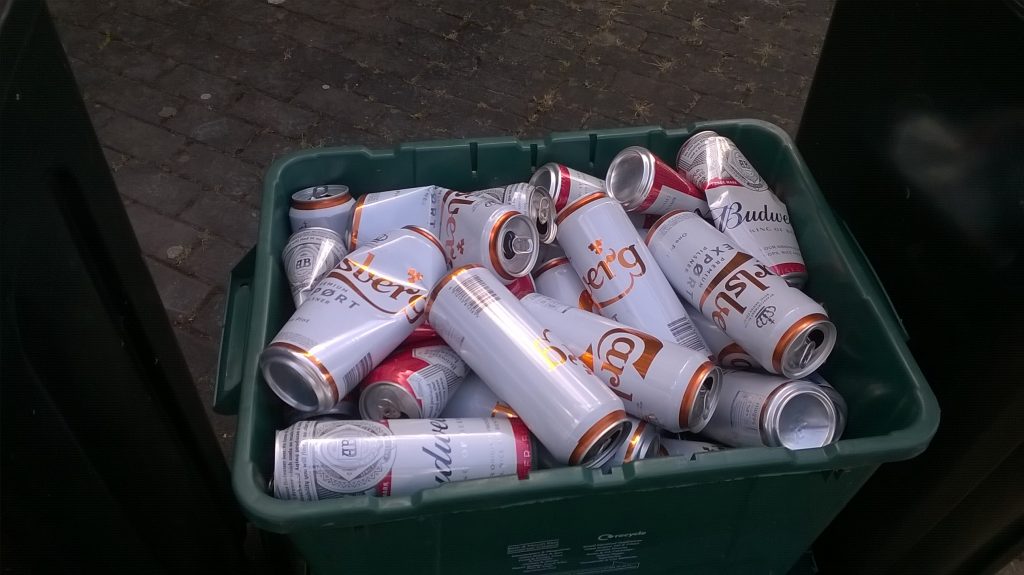 These are two pictures taken this morning. One is in my garden; our Buddha trying in vain to see through the proliferation of plants. The other picture is one of a lifestyle statement, “eat drink and be merry for tomorrow we die”. One can only wonder what this person will suffer from. Will it be a disease of the liver? Another opportunistic disease which arises from bad eating habits? We shall never know.

This evening I went along to give a talk in Frome, together with two others, on the financial state of 5G at the moment. The very government department (Ofcom) in the United Kingdom tasked with accepting billions and billions of pounds arising from the sale of rights to use certain frequencies, also has explicit instructions not to talk about health. Health is the key factor that makes 5G so dangerous. Clearly, the powers that be have it all sewn up. The plans must have been fought for years if not decades.

The talk on this rather poor quality video recording shows me making an attempt to communicate with people of varying levels of understanding. I have aimed for the middle

10 Imagine a group of scientists with clipboards watching the behavior of laboratory rats. They administer electric shocks, or poisons, and observe the effects. If rats die in the process that is immaterial. To the powers that be, we are not seen as humans. We are seen as goyen, as dispensable slaves, as useless eaters. We need to get over this “they wouldn’t do that would they”.

John Donne wrote his famous words “no man is an island” and further down the poem says “never send to know for whom the Bell tolls; it tolls for thee”. The silent bells do indeed toll for us human being The way to respond is by strength of character including our higher mind and access to accurate information so that we do not go into this venture like an ignorant street fighter but observing from a helicopter. We need to have an overview and be streetwise at the same time or be as innocent as doves and wise as serpents.

09 If you want the shortest ever political explanation of why the world is as it is today it consists of five words. ‘all roads lead to Israel’, the only country created out of another one, Palestine, by a political body – world Zionism – as a control centre for their sociopathic ideology. Zionists control America. Try getting elected to Congress without expressing loyalty to Israel. Think of the numerous hospitality visits extended to members of Parliament by Israel, all to soften them up. How does this relate to 5G? The aim of the globalist agenda 21 / agenda 30 is a One World Government and therefore anything which increases control over the individual is approved.

08 When we speak to local authorities, Members of Parliament, and even those in the industry, we speak to programmed people, prisoners of ignorance. These are brainwashed people from whom the truth as being withheld and whose salaries depend on not asking questions. Governments have accepted their 30 pieces of silver in the form of licences so are unlikely to listen. There is none so deaf as those who are being paid off

07 The campaign to dumb down the population has been ongoing for some years . The methods include fluoridisation, Dumb Down Central TV otherwise known as the BBC, junk food, GMO, vaccines, you know the rest. As if that were not enough we have the Marxist inspired Political Correctness which is neither political not correct. It was created in Frankfurt in 1923 to destroy Western society from within and in this case it has been phenomenally successful. Individuals are reduced to gibbering wrecks if they even think of expressing a point of view that might ‘give offense’ when in reality the best service we can offer each other is honest feedback.

06 the plans for marginalising the human being and culling what is perceived as excess population has been going on for decades. Consider the mysterious A C Christian and the Georgia Guidestones. Was it not overkill to make the same statement in 8 languages saying that the population should be reduced to 500,000,000? No, because it was meant for everybody on the planet. The languages engraved on the stones were English, Spanish, Swahili, Hindi, Hebrew, Arabic, traditional Chinese, and Russian. The anonymous group had been planning this for 20 years prior to 1979 so the Venus fly trap is working.

05 – As for people just arrived on the scene, playing catch up is going to be a labour indeed. It took me two years to understand 911, Sandy Hook etc but now people are catching on in the first you tube videos of a false flag appear within 48-hours.You could do worse than get hold of books by David Icke who for the past 25 years has been warning us of what is about to happen; his prophecies have come to pass with unfailing regularity.

David reminds us that what you don’t understand will control you. If we want to be effective red pill people we need to understand both sides. Why are we doing what we’re doing, and why are the other side doing what they’re doing.

Here are some general rules that apply to all types of activity and campaigning.

04 – How do we get involved? The nice thing is that we don’t have to be good at everything. All skills are required. The most important thing is to get to know who is doing what in your area. Avoid getting into a private mental battle ‘me against the world’ because you will come of the worst. Associate with others. When you find the right thing to do, that which suits you will not seem like work, more like breathing

03 – when we approach people it’s a good idea not to be too aggressive. The average Joe on the Street has enough to cope with what with job, girlfriend, the stresses of living, the pressures on the purse. This topic should not be presented as just another bit of bad news. Our approach needs rebranding. I suggest we make ourselves the sort of people that people can ask questions of. In other words approachable people, not ones perceived as nutters. Unless you want to lose all your friends, better to experiment talking about 5G to people you don’t know.

02 – as a balancer, I suggest finding a hobby or pastime that’s exactly the opposite of any serious campaigning activity. I do landscape gardening but also I have kept a Samuel Pepys type diary for nearly 3 years now. Another 20,000 words to go and I shall have equaled the word count of the novel War and Peace. More importantly though, it enables me to live not just for myself but for others and when I click ‘publish’ I share my life and thoughts. This is a great mental stabiliser.

01 – To Rosa Parks it was just another bus journey, another day at work. She was asked to move from where she was sitting and she simply said ‘no’. This was hardly the Gettysburg address but little did she know that her action of defiance would be the tipping point. Any of us could be the tipping point, we just don’t know so if you feel you are too small to make a difference try sharing a bedroom with a mosquito.