Saturday is play day, especially with a clear blue sky and the promise of warm sunshine so off we go at about 10 AM to Wedmore. This town has many cultural activities during the year which is very good for such a small conurbation, somewhat shy of 4000 people. This was the annual Street Fair. The town is affluent. There is money around. You get the feeling that people don’t need to prove a point. They have money. They have had successful careers. They don’t need to flaunt anything. 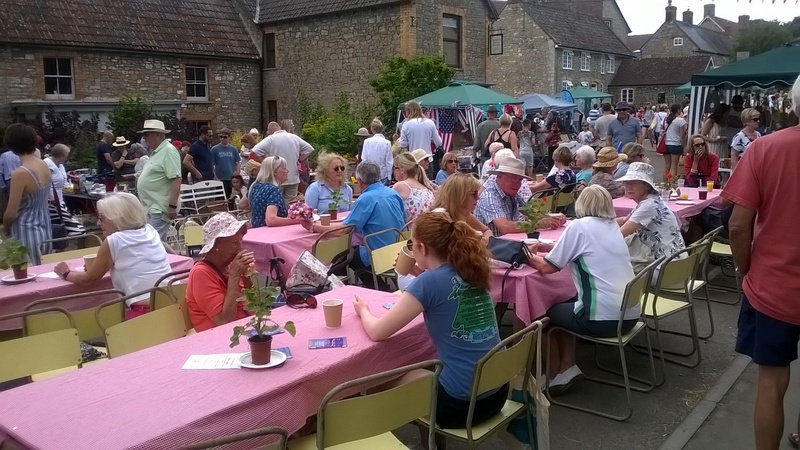 My experience corresponds with my visit last year which my more avid readers will recall. (search for Wedmore). During our visit we chatted to one or two people but didn’t make a big thing about it. We enjoyed the fact that everyone seemed to know everybody else so it was like a grand family gathering. The young nuclear family was in evidence and it was clear that the parents were more than capable of looking after their impressively well-behaved children.

Half way up the street there was the first of events that were meant to happen, in my book anyway. There was a female masseur and reflexologist waiting for business. I did not feel in any particular need for a massage since I am well looked after but strolled casually up to her and said it was good to see her there. She asked me whether I wanted some treatment and I said no but when I told her what I did, i.e.  my psychic side, she readily agreed to a trade. This means that she will give me some treatment I will give a psychic reading.

She worked on my feet and identified all the problems that I had to deal with such as my stomach, the excessive activity in my left brain, and my back. The idea is that work on the feet releases the corresponding part of the body related to it because the whole body is linked up energetically. The feet, the ears and the hand have particularly good connections to the corpus.

The time came for me to give a reading. I tuned into her father who had passed away some years ago and to her mother and found two completely different people, chalk and cheese you might say. I told her that she was enormously lucky and fortunate to have had such a father as a role model. As well as the reading I told her various things about herself which I won’t mention here.

I then went through her life and identified the ages at which traumatic events happened, the ones which had not been dealt with. I find it quite fascinating to do this. I use pendulum dowsing by the way. When I reach a  year when there was a problem with the patient, the pendulum stops dead or starts spinning eccentrically. We all have an entire record of everything that happens in our life in our auric field and I for some reason best known to the Almighty am able to detect this quite well. In fact very well.

She had worked for 10 days in Glastonbury giving many readings. I did not mention the topic of 5G but we can discuss this later. We finished – after about half an hour – on very good terms and we invited her to come and have tea with us. With due respect to Midsomer Norton it looks like it is our base to make friends in a much wider area, you could say  nationally, but there are always local folk who although not necessarily on our wavelength provide the humanity and community mindedness that we need on a day-to-day basis.

We decided to wander down the one main street of the town, photographs illustrate this. Draw your own conclusions. 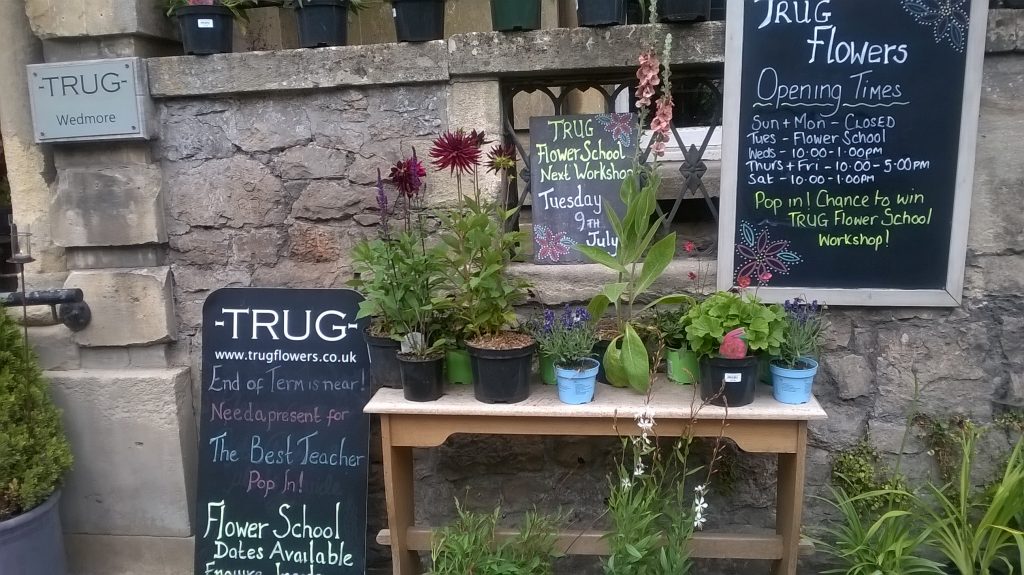 I get tired of saying this but You can tell more about town or village from its noticeboard and indeed from the condition of its local store or community shop than any other single source of information (even Trip Advisor).

We met a man who had been carrying around some sweet peas.I accosted him in a friendly way asking him if he was looking for someone to propose to. His response was that he had been married for 51 years, today was his 51st anniversary and turning to the person next to him he said ‘this is my wife’. He said he was going to have three 51st birthday parties with various friends and with family. They were obviously very happy together though I did get the impression of the odd clash of temperament. The wife said that the 50th anniversary seem like yesterday.

I commented that if two people are in love then each encounter will produce a development in them so in theory you could go on for ever and not repeat yourself. I used slightly different words but that was the gist of it. What I like about such cultural and sophisticated places is that you can start very advanced conversations with someone and find they don’t go on the defensive but are happy to engage on the understanding that this is a casual one of meeting and you will not pursue them home or invite them to dinner or anything like that.

The body language has to be concomitant with this.

Off to Burnham on Sea. This is a nondescript town which just happens to be by the side of the Bristol Channel. It is unmemorable. There are no hotels of any status, no chains, no holiday inn, and the lack of facilities is the main reason for this together with the state of the seaside of which more below. I hardly need to add that there is no bus station or train station.

It has one long main street, laid-back one block from the seafront, with the usual assortment of inexpensive cafes, the old health food shop, charity shops and bargain basement institutions and a betting shop. I dread to think what it is like outside the season. There is a pier, or rather what was once a pier that had been chopped off at the base and now houses an amusement arcade. It is unlovely but I’m sure you can get some excellent fish and chips there. No seaside town would dare to offer a national dish of this importance of anything other than first quality.

You might say, what about the beach? Well, it’s not actually a beach it looks like a beach but the sand or what remains of it is extremely muddy. There are red flags to warn you not to go out at low tide when the sea goes out a long way. It’s not as dangerous as Morecombe Bay but very foolish to go walk out at low tide. Swimming would be completely mad. Swimming would only be possible a couple of hours either side of high tide. To be fair, there are some dunes to the West of the Town which could be quite pleasant. 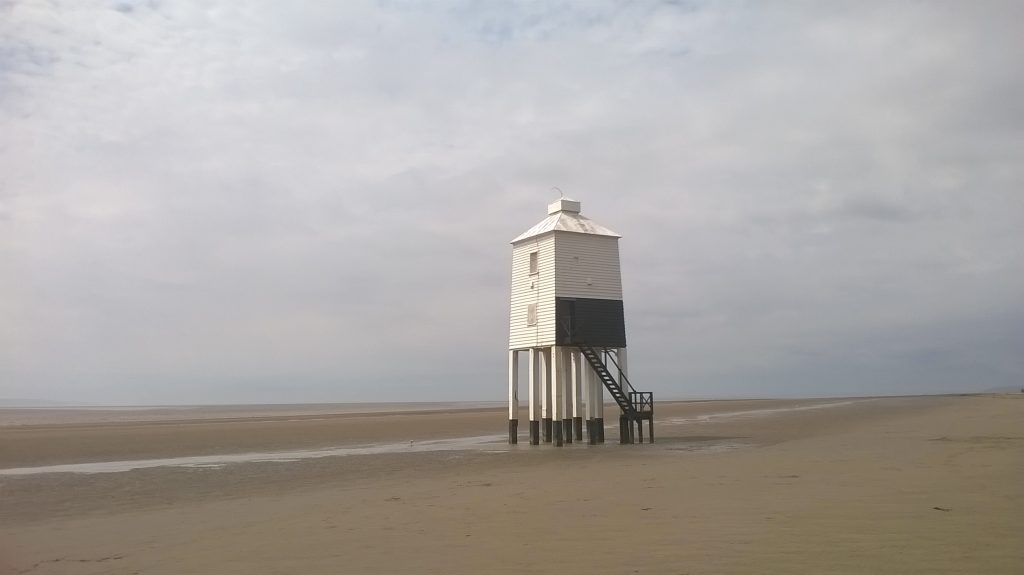 I’m told that this was once a lighthouse. It seems quite quirky to me. There were three evidently warning people of the mud no doubt. “Burnham’s ‘lighthouse on legs’ was built in 1832 to complement a separate pillar lighthouse which was found to have too low a vantage point to be sighted by all vessels in the channel.“. Thank you Google.

The picture shows a group of seagulls sheltering against the westerly wind. If you look very very very carefully you will see Hinkley point in the distance, the vast new nuclear power station. It will probably not bring out the romantic side of most of us but for fans of nuclear power stations I’m sure it will do the trick.

We can think of no reason for ever returning.

Back home and a rendezvous with my friend who is camping in nearby Glastonbury. We made a nice easy evening meal of mashed potatoes with butter, salad with all sorts of ingredients including grapes, and a nice cheese omelette. Wimbledon is on at the moment and all tennis fans in the world regard Wimbledon as a premier venue. I have just watched Andy Murray and Serena Williams thrash two opponents in the first round of the mixed doubles.

I love the way the BBC capture the mood of the audience. These could be three Chelsea girls trying to look interested and be seen. 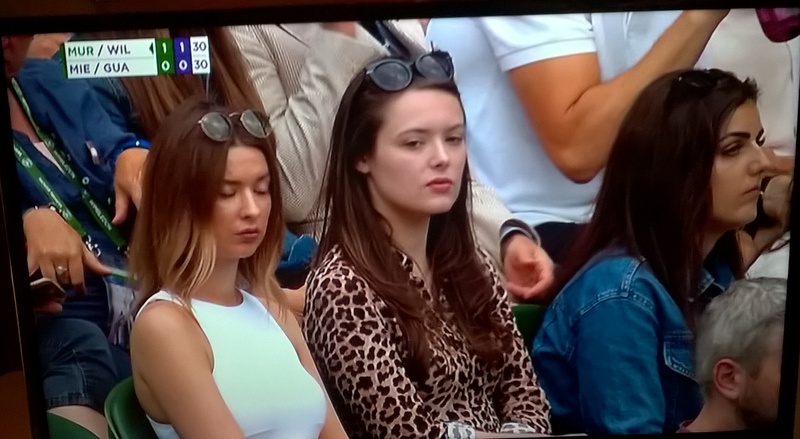 Meanwhile, on the court itself…. 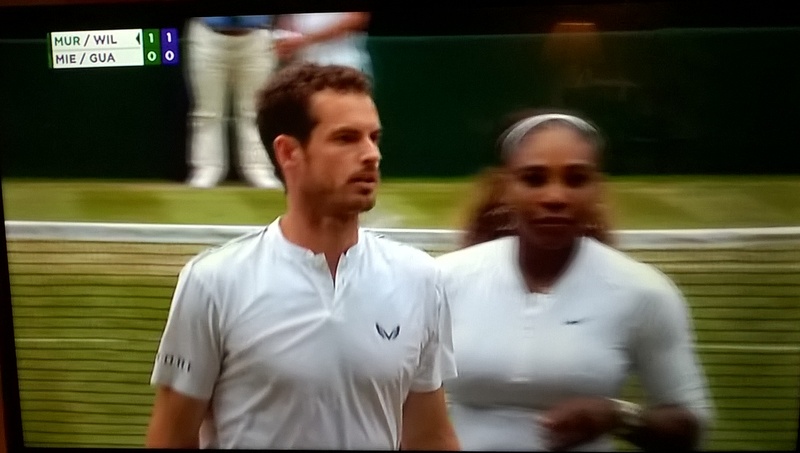 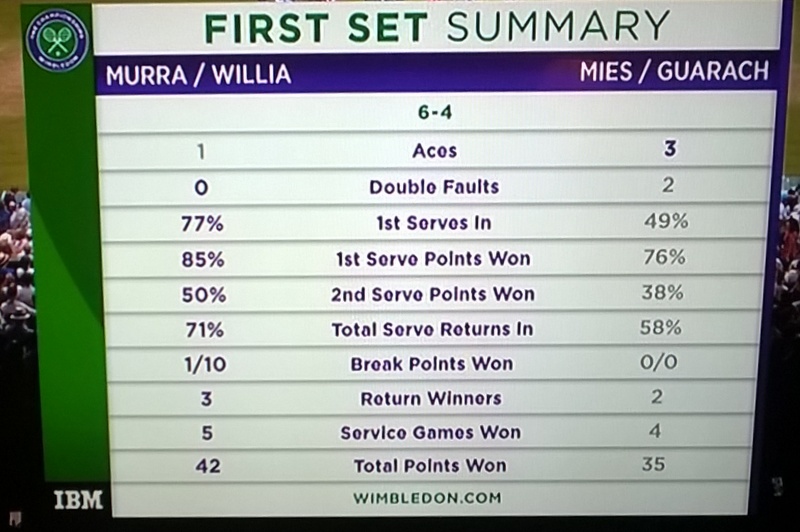 I almost forget about tennis during the year but come July and Wimbledon my eyes are always glued to the TV. For some reason I find the sound of the ball being hit by the tennis racket to be mildly hypnotic