Unbelievable bad practice! See below. But meanwhile read on 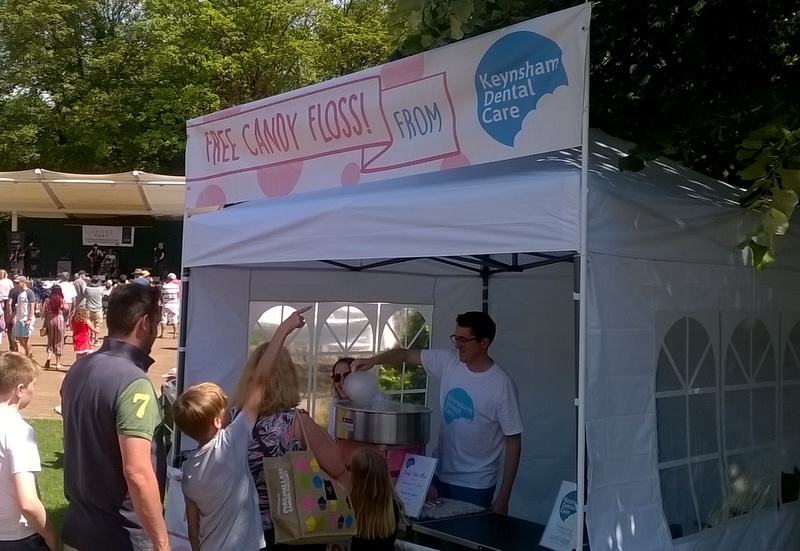 My wife wants to build a rockery. We used the excellent services of Facebook marketplace to find that someone was offering local stone, an ex-wall, for £10 for a van load and £5 for a car boot load. The owner of “The Old Vicarage”, Craig, was affable enough and waved us towards three big piles of stone of varying sizes. It was truly local stone. 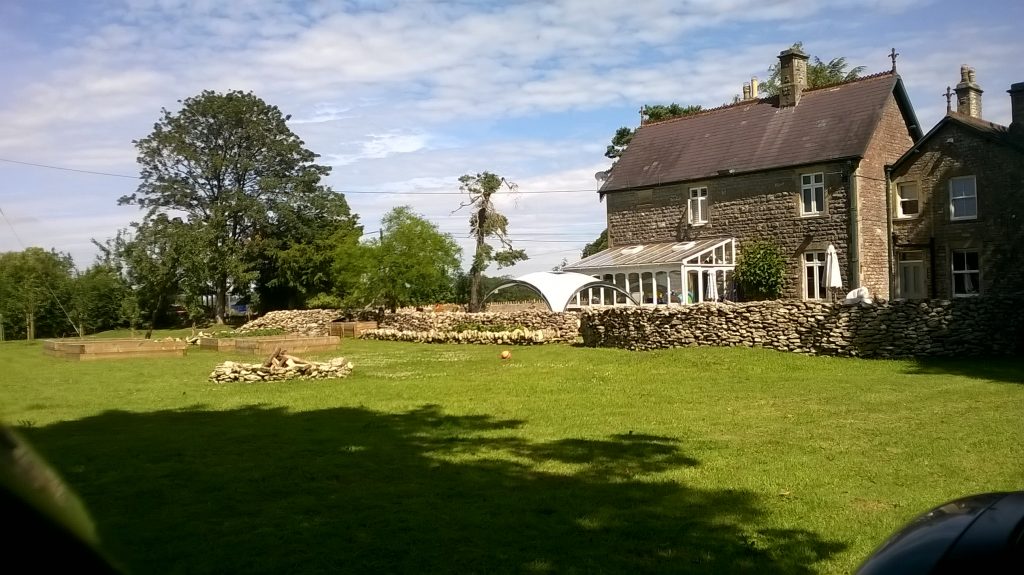 A general view of the house. My goodness,  Vicars of a previous era did live a life of luxury in the old days. Below, you will see lovely raised beds containing potatoes and a first attempt at a barbecue. How lovely to have a lot of space that you can do what you like with. 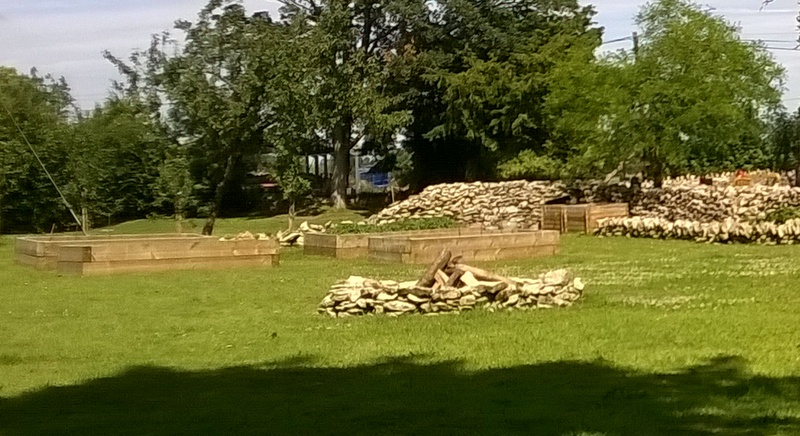 Now we come to the minor problem of taking the spoil away. Stone is heavy. My Volvo 70 is capable of carrying most things. We have abused it in so many ways and thank goodness we have an early model which was overengineered. Even though, we were slightly concerned about overloading it and drove away at a snail’s pace. Next time we will take more. The sign of an overweight load is when you sit in the front seat and cannot see the road in front of you. Have mercy on the suspension.

And so to Keynsham. I was feeling unwell and unsure whether to go or not. Francoise did some dowsing on my condition  and found that my problems were due to lack of sleep which in turn was due to too much time on the computer during the evening. I must admit I’m a real computerholic though I should know better. It just there is so much good stuff I want to put on and keep the public up-to-date. I refer to 5G.

On the road, I reflected. Those of us that are old enough will remember the advertisements on radio Luxembourg for the pools. The mailing address was Keynsham spelt K E Y N S H A M by the very obliging man, Horace Batchelor, telling the punters where to post their coupons.

In the middle of Keynsham is a natural valley where there is an annual music Festival . When we turned up, it was in full swing with three sound stages and one dance and music stage.

The Kennet and Avon Canal is a very complicated piece of engineering and this is an overflow river to the side of the main canal which forms part of the entrance to the park where the show was. It was about the most peaceful place in the whole park. 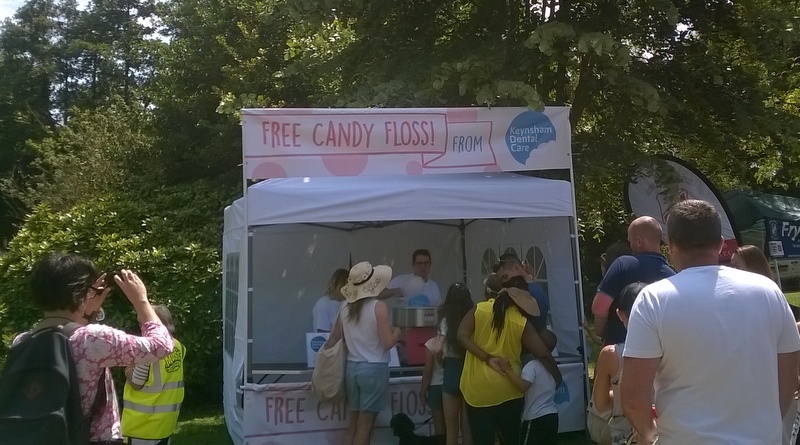 See full-size picture above. I could scarcely believe my eyes when I saw this. Professionals at the Keynsham Dental Centre who should know better encouraging children to have candy floss which is little more than just sugar. Is this a part of a long-term marketing strategy to get children’s teeth to be destroyed by sugar and other sweeteners. They must have given 100’s of samples out as the queue never shortened. 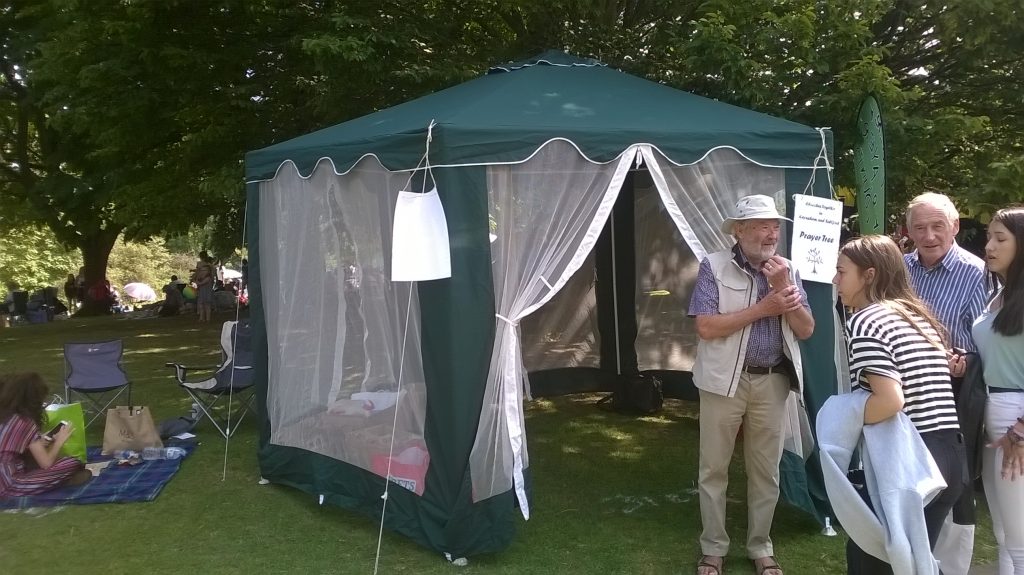 Finally, this was a stand organised by the Interfaith Churches Association of Keynsham and district, a very lively church group consisting of 14 churches of all denominations. I admit I felt a bit battered from all the music. As soon as I went in it felt like a cool breeze but not a breeze. In other words, it was not windier in the tent then outside but there was definitely something there which I attributed to the power of prayer.

I told them about it and I think the person pictured was quite shocked that I should actually give an intelligent comment. I said irrespective of people’s reactions or lack of it, it was very important that they were there. I described it like an igloo of light. Slightly unusual you might say but I had to say what I found. The feeling remains with me as I write this diary.

I am fairly knackered so I think I’ll have a magnesium bath after I come back from my watering at the allotments. I love these light evenings.

My good friend Will has three lovely children and is brilliant at practical tasks. He has this job of chicken plucking believe it or not. This is a 24 hour job and he was telling me recently that he had to get up on one shift at 1.30 in the morning. He does a few days of this and then he is put on another shift. No wonder he was exhausted when I met him. The money may be good but his family life must suffer something rotten. Rather him than me.