If music be the food of love, play on,
Give me excess of it; that surfeiting,
The appetite may sicken, and so die.

I know the first line but I haven’t a clue why Duke Orsino should ask for an excess of it. (guess) Of course if you have too much the appetite will sicken and die. Maybe this is is attempt to deal with unrequited love, his aim being to stuff himself sick with his own passion. I’m not really into William Shakespeare.

However, back to the current world, to this date and time.

Shame on me, or should I say lack of discipline, I don’t listen to as much good classical music as I should do. I read somewhere about the pianist – Eric Lu– who won the Leeds piano competition. I find the quality of his playing quite stunning and this is what I used to start my day.

I find it interesting that music therapy has been examines for use in dealing with numerous medical conditions. All forms of music may have therapeutic effects, although music from our own culture may be most effective though not necessarily in my case. I love Indian music for example. This is a lightweight but interesting article.

Today, I met a new plot holder that I mentioned yesterday, Neil. He turned out to be a widower of about 65 years of age accompanied by two dogs, Polly and Mary Kate. His wife died a couple of years ago and he thought he had overcome his loss but suddenly, strong emotions came back to him unexpectedly and he found the episode difficult to deal with. He decided to be proactive and go to a local college to attend a so-called “mindfulness day”. I have no idea what the detail was but his plan gave him the courage and the means to move on. I commented that emotions come when you’re ready to handle them and he agreed with that.

He says that having an allotment plot would enable a change in his life because he could get out more. His home is about 100 m away from the allotments themselves so this is absolutely ideal. I got a good feeling from him when I spoke to him on the phone. As my South African friend would say “he’s got something to bring to the party”.  He starts working the plot on Saturday. Job done. 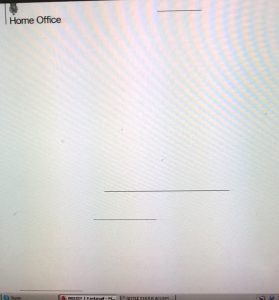 The UK Home Office are completely and utterly useless. My wife who has a French passport applied for indefinite leave to remain (ILR) and today she received the reply.

This is the PDF version of the letter. The only problem is that there is no visible text. Fortunately I immediately recognised the problem – that some incompetent had set the text colour to white. I did Ctrl + C, and copy and pasted the invisible text, chose black and we could then read it. Francoise has received permission. I guess hundreds of applicants must have received this and have been utterly confused.  Surprise surprise there is no phone number to find out since it all has to be done by e-mail. As we say, the Home Office couldn’t even organise a piss up in a brewery. Thank goodness I don’t have much to do with them. I guess that the average pay there is quite low so as they say ‘if you pay peanuts you get monkeys’. I’m sure there is some political incorrectness in that statement but quite frankly I don’t care.

In last Sunday’s diary I wrote about my  visit to an exhibition tent run by a group of churches in Keynsham at the culmination of the local music week. I was invited to come to a talk aided “Free barbecue life story” at the Crown Inn. Someone called Tim was going to speak. He was brought up an atheist. Since I was so impressed by the atmosphere of the tent I thought I would come along and give it a go. I turned up and somehow found my way into a garden behind The Crown Inn and saw a group of people milling around and chatting away. A cold barbecue was set out. I didn’t know a soul but I felt at home so that didn’t really matter. In my experience it’s only a matter of time before you start chatting to someone and on this occasion this proved to be the case.

I went back into the main bar to get myself a coffee. I got the impression that the lady behind the bar, one and a certain age, was not quite with it. I stood for a couple of minutes waiting to be served. She looked around from what she was doing and jumped as if I was an intruder. I asked for a coffee and asked what type. She said “what do you mean?”. I said filter. She replied ” it has gone cold”. The conversation stalled at that point. She said brightly as an afterthought “I could make you another”. She put some copy in the filter and poured a full measure of water into the machine. I guess it would take some time. It did indeed. She said “would you like some milk?”. I replied in the affirmative. She shuffled off down a long passage and reappeared 2 min later with a 2L bottle of milk which she gave to me. “You can help yourself” she said.  As a bonus, I got two packets of brown sugar.

Meanwhile, the manager placed a cup and saucer on the bar with a little packet of three biscuits. I declined the biscuits. She noticed and said “you don’t want them then”. I wanted to explain that biscuits didn’t quite go with a barbecue but felt that I would be wasting my breath. Keynsham is a funny ‘in between place’ it’s not city, it’s not town, it’s not a village. I don’t know what it is really.  In a way, the fact  the staff have not been trained reflects this. There was a feeling of “make it up as you go along”. It was not unpleasant, just a bit chaotic.

But anyway, back to the main part of my story.

I met two bikers. The first one was named K.J. who was much adorned with silver rings on all his fingers, who said fairly early on in the conversation that he had Asperger’s syndrome and OCD. Asperger’s is characterised by significant difficulties in social interaction and non-verbal communication, along with restricted and repetitive patterns of behaviour and interests. He said more than once that he could not understand sarcastic humour. I in my turn did not understand why he did not.

OCD is obsessive/compulsive disorder.    I admitted that I had OCD in a very minor form and we were amazed to find what we had in common. We both hated being late for something and feel that if someone has agreed to turn up on time they should do so. His flat was a model of tidiness, and had 250 model cars on display, all arranged in a tidy configuration plus  models including boats but I forgot the details of. His kitchen at home is immaculate. Every morning he gets up at about 3 AM. Quite what he does at those times we did not establish but it matters not.

He and I both have a habit of sitting at the back of church at services normally in the same place because we want to feel there is an escape route if things go wrong. Interestingly, he has done a lot of good deeds for a lot of people for which it requires no thanks and effect is embarrassed to be thanked. He told me he had done this since the age of 14. I admitted that I liked things to be orderly and when I crossed the street, I had to walk across in even numbers of steps. I could not say what happened if that did not happen because I never let it happen. We both agreed that is very nice to meet a fellow OCD person because you don’t have to explain. I said that if you accept the impediment that say it turns into a characteristic or a feature and is not a problem.

Amazingly, to my left, sat a chap called Richard, also 75, also with wet macular disease. Who says like doesn’t attract like. These two ‘speople have been bikers all their lives and could talk indefinitely about bikes so I had to struggle to getting the word edgeways. I did not mind this at all.

I then saw what I consider to be the ideal style of evangelism which is not evangelism but a personal testimony. Tim was an atheist with atheist parents one of whom was a scientist and the other I can’t remember but  they most definitely did not believe in God and nor did he for the first 24 years of his life. He then met a group of people who were ‘different’ and eventually found himself speaking to God in his head, how ironic for someone who does not believe in God at all. Here is a flavour of part of his talk. You may have to turn your speakers up because the sound level is a bit low.

I was attracted to him because he started by saying that he didn’t want to give an evangelical talk, but just wanted to chat about his experience. In other words he was giving a testimony. I love testimonies because they don’t put any pressure on you at all, take it or leave it, relate to it or not.

He is an IT consultant. He told me afterwards that his boss calls him in once a week for a chat which can often last one and a half hours. He told me that for the first two or 3 minutes they talk about work and then he spends the rest of the time answering questions from his boss about God. That is most impressive if you’re the sort of person that people can open up to especially your superiors at work. The boss must have a tremendous respect for Tim to do this.

I remember, when I was but a teenager my job was to clean the brass in the church of which my father was a vicar. There was a small plaque in the pulpit which said “Sir, we would see Jesus”. To be an effective testimony giver you have to keep yourself out of the way and just be a vehicle, unspoken if you will, of another level of existence – that level is one of faith and belief. Too many preachers are full of themselves and their own ego I’m sorry to say and when people lose their ordinariness I lose interest in them.

I have a chat with Tim after his talk wondering if he could help with one of my websites. I will only work on a project with people who are on my wavelength. Tim recommended a friend who was a street pastor working in Bristol’s I shall give him a call and see what happens. If you try and work with someone who doesn’t know what you are doing and why you are doing it, it is so much more difficult and time-consuming as I have learned to my cost but hey that’s the normal way of learning.

I chatted to KJ and Richard after the talk and said that you never know when an opportunity for sharing your beliefs is going to come up. One of the reasons I do not listen to music on headphones when I walk along the street is that it makes me less aware of what is going on and you never know, a brief “good morning” maybe the very thing that will make a difference to somebody’s day. To me that is worth a lot. I enjoy putting myself second and others more in focus.