For once I was glad to get on the coach at Victoria station. I noticed in the queue a young mother with three young children, one a babe in arms, and I knew that we were in for a test of tolerance. Sure enough, the youngster screeched at irregular intervals – and loudly. I’m so glad that I was at the opposite end of the coach. It turned out that they were going to Frome for four days camping. I do admire someone like that who can function so well, or attempt to do so, as a family activity.

The day was hot. When we left Victoria it was about 29°C. Thank goodness for the air conditioning without which we would have been in a complete mess.

I arrived in Bath in time to have my monthly eye checkup at the RUH. Since lunch is served in the hospital restaurant until 2:30 PM, I was able to arrive in time to have my favourite apple pie and custard and then on to the ward.   I was given a new doctor, a young chap who had zero rapport. He was thorough in his inspection of both my left and my right eye, the problem is that macular degeneration can spread from one eye to another. He found no adverse change and said that I was free to go. Normally, the other people show me the quick scan of the eyes so I can see for myself that it does not need a further injection. At least I was in and out quickly.

On my way to getting the bus I saw an interesting variation of a recognisable picture, ‘Nighthawk‘  by Edward Hopper.  The original is shown first. The one below is called ‘The Corridor‘ by Nick Cudworth and is part of the ever-changing art exhibition to be seen along the corridors of the hospital. 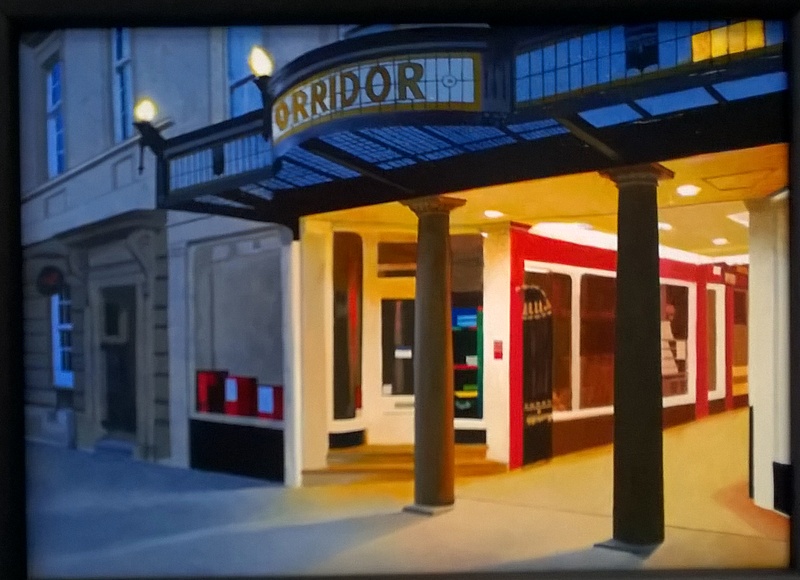 Home, to discover I had a large adult  tick hanging onto my skin above the right nipple of my breast. I may have caught it when I was on Hampstead Heath yesterday.  We tried to take it off by twisting it and pulling it but some of it was left in the wound and there was an area of dark red infection. Mild panic.

So off to the local hospital where they dug out the rest and dressed it with a substance, you will never guess, famed for its drawing power, and that is …. . honey.