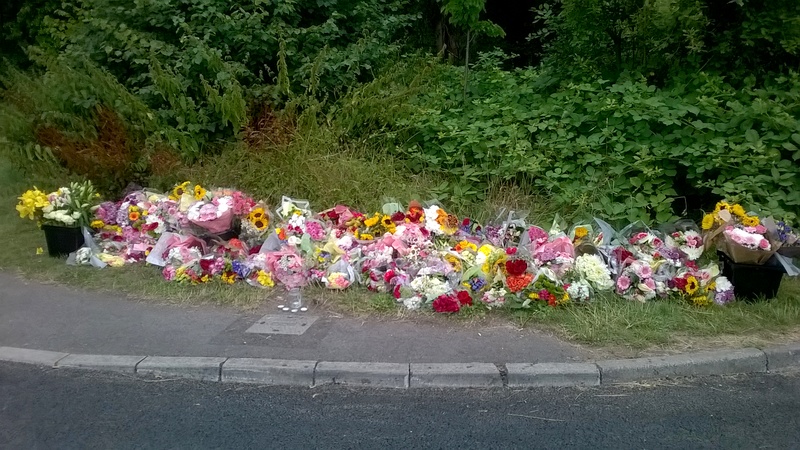 I was on my way to church this morning, to a small but very informal communion service presided over by one Katherine who gave a sermon on today’s gospel about the man who had more grain than he could store so he wanted to pull down his barns and build greater.  More of that anon.

On my return from church. I stopped off to look at who had passed away. Obviously, this was a popular person and it must have happened very recently because of the number of fresh flowers. I think there were about 60. However, as I looked, I could not see one single one with a label on. Normally you get something like ” with very best wishes from X” ” love you and miss you”. Eventually I found one. The person’s name was Jenny. It occurred to me with horror that these people had no inclination to write a personal note. All I saw were receipts from Tesco for the flowers. Typically £3.95. They were just dumped because people were not used to actually writing.   Where were the feelings of these people? Maybe they don’t have any feelings. This is a sign of the times. It was a drunk driver evidently.

Back in church, Katherine went on to tell the story about the man, we wanted to have security in his property so he could eat, drink and make merry. God called him a fool because he said that “this very night, your soul will be required of you.”. This may sound a bit killjoy but God was trying to tell him that we don’t possess anything. Money is not real as in ‘reality’. Money and any possession is given to us as custodians.

The preacher also reflected on the situation with her neighbour who has been next door to her for the last 6 years who only talks about herself and has never once asked the preacher at about anything to do with her life. In other words she was self obsessed like the man wanted built his barn. She remarked on the number of times the first person singular was referred to in the parable; I will pull down, I will store my grain, I will tell my soul.

I learnt a lot from that.

I can say I’m guilty of the same.  A certain self-centredness. The sermon caused me to reconsider my attitude towards ‘my’ money such as it is.