I’m a very bad meditator because as soon as I start, I think about all the things that I need to be doing and try to shut them out of my mind, normally unsuccessfully. I give up after about 5 minutes.click There is one form of therapy that really induces the alpha state in me without any problem and that is a fire.

All Saints Paulton is experiencing an interregnum period. I was told the policy of the Church Times is to charge £1000 per entry advertising for a new priest. I don’t know how they justify this. It sounds like pure and simple greed to me. Anyway, I digress. It has been my pleasure to severely trim a laurel hedge in the churchyard. Laurel wood is very soft and easy to cut so the job looks difficult but actually is very easy. The wood contains oils so as you will see in the pictures below,  combustion is hot and thorough. I hesitated to start the fire as the weather forecast was not good, but decided that as the whole process would be quite quick, as it proved to be, I could beat the rain.

Air, earth, fire, and water are the main elements  and these are combined eloquently in a natural fire, not a fire in a grate at home but a fire in the wild. 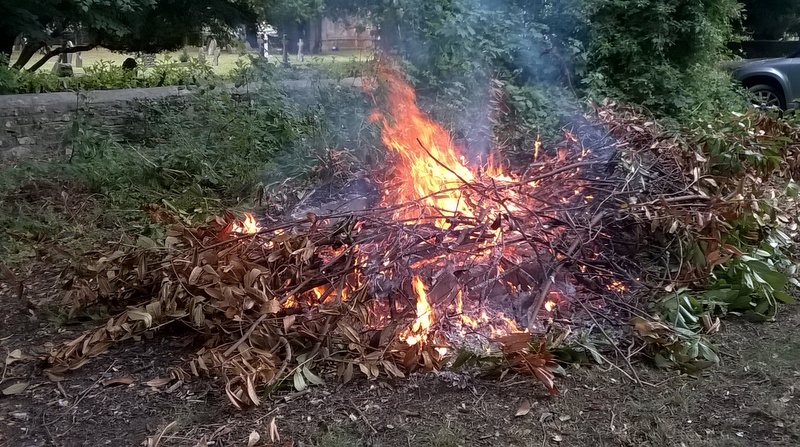 This was the fire at an early stage where I was introducing a combination of dried branches and fresh branches both of which are equally well. The fresh branches had more water in them but they also have more oil. So when they were thrown on the fire they exploded in a machine gun like fashion. At the rear you will see the stone wall that was originally completely covered. 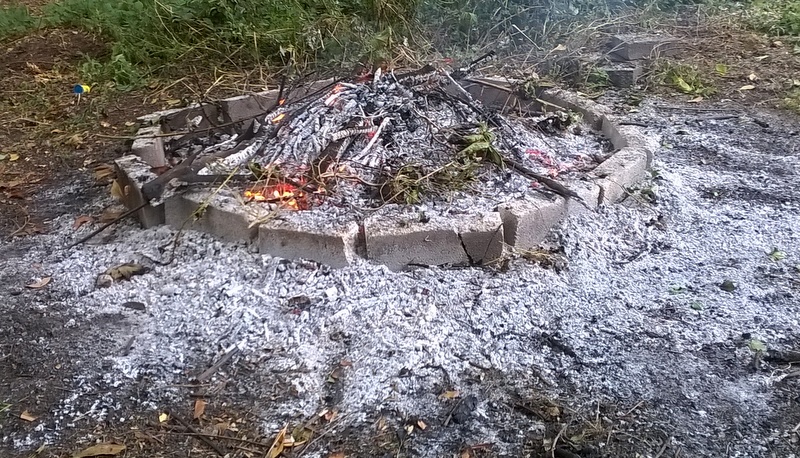 This is the fire a couple of hours on when everything had been reduced to white ash.  The trick is to rake all around the area and place the unburnt wood in the middle where it will revert either to charcoal in the case of incomplete burning or white ash. The reduction in volume is about 95%.

What I like about this whole process is that you corporate with a natural phenomenon. You encourage it to burn to the best of your ability. Most of the time is spent standing staring at the fire and enjoying the heat and the sound of crackling flames. I find that I’m inevitably ‘in the zone’ and at the end of such events have attained a more peaceful cast of mind. If I had spent the same amount of time trying to meditate, I would not have got such a good result.

Françoise came along with me to the coffee morning today at the church. She told me that the lady sitting next to her was fed up with her husband because although he had money he didn’t want to spend any of it and particularly resented her being on the telephone. According to him, the telephone must be used for emergency only. The poor woman could not even talk to her friends, such friends as she had left, without having the baleful stare of the husband looking at his watch.

I read that the number of divorces among older people are increasing these days, and I think more and more women are not putting up with boorish behavior of their husbands.

The government article said that  in England and Wales, divorce is in decline – our most recent 10 years of data show a 28% fall in the number of divorces between 2005 and 2015. But older people are bucking the trend. In the same period, the number of men divorcing age 65 and over went up by 23% and the number of women of the same age divorcing increased by 38%.

I have always said that the most important thing is to be married to yourself. This implies if you want in a relationship or on your own. If you love and accept yourself. The rest is easy or easier.