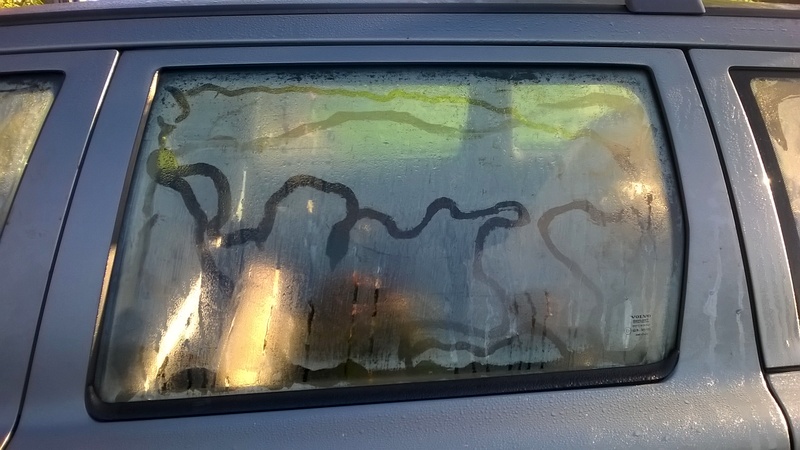 I awoke to a bright autumn morning with no sign of any cloud. I often carry foliage around with me in my car and it appears that I did not spot a most enthusiastic and athletic snail who was obviously wandering around during the night  around trying to find his way out. We do not know what happened to him or her, but hopefully there was a happy ending. We saw no sign of the passenger.

We had a lovely double day when I worked extremely long hours. First, off to finish the hedge job started yesterday.  Bryan and his wife were in a very fluorescent mood. Bryan told me that he was off work and had lost his licence to drive a coach because he had had a scrape with someone and he admitted to the police that could not remember what had happened. “The system” decided to take away his license and he now has to go for a medical examination to make sure he’s up to par. His wife let their dog out when they got out of the car and it ran across the road and was run over by a car. The driver didn’t stop. The dog survived but with some injuries. She had also lost her mother two weeks ago. Nevertheless, they both put a cheery face on things and I think I cheered them up by doing a really good job for them.

We then went home and then went off to another job in Tunley which is where the lady lives that gave me the dog kennel job. We had the task of blitzing an area that had been used for bonfires over the years and discovered all sorts of strange objects, metal objects of undetermined origin, wooden boards, plastic bags, Christmas treess, roots that did not seem to have any particular function. I immediately made a fire and consumed all the consumables and broke  down the rest to ground level.

This may not sound wildly exciting but when the situation has been in train for some years and when the customer cannot find anyone to do it then the gardener or worker can make a big difference. Although the day was damp, we did manage to find enough dry wood to make a fire. I have a fiendishly cunning way of increasing the speed of fire and that is by using the air blower.  It is normally used for tidying up leaves, but if you point it at the base of a bonfire once it is alight, it causes the bonfire to blaze forth with the sound of a furnace.

We treated ourselves to a glass of wine, now an occasional event, in the local pub. Everyone was holding forth about two local accidents one in Dunkerton and one in Timsbury. We chatted with someone called Tracey and I said I had done a job for the person over the road called Ian. She knew him, and actually had been his next door neighbour, and said that he owed her £400 but that he had now moved out of the area. Ian and his wife had three autistic children between them and so we were regaled in some detail to the happenings with this family.

Tunley consists basically of one road so there must the maximum 200 people in the whole the area and it appears that everyone knows everyone else. She certainly knew the person I’ve just been to do gardening for. What a pleasant way of ending the day.