As they say, the day dawned like any other day.  I got up very early and listened to the latest on the sport, the weather, Brexit, usual things and particularly relished having a cup of coffee and some toast. You are not supposed to eat anything less than six hours before the operation, which was scheduled for some time after lunch. 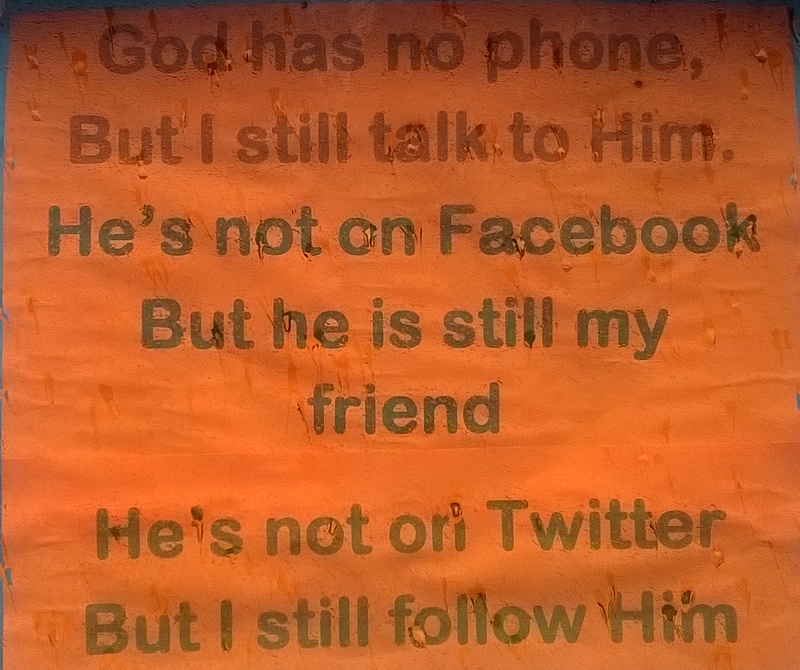 I saw this outside the Methodist Church in Peasedown. Someone has a very good ability to think laterally and this message brought a smile to my face.

We arrived at the hospital somewhat early at 12:15 PM to the Circle Bath hospital, which in its own literature describes itself as “an award – winning hospital, led by some of the South West’s most experienced consultants” .

It sounds really corny to say this but I was looked after with the utmost professionalism, good humour and courtesy right from beginning to the end. As is the custom in defensive medicine you have to give your name and date of birth about half a dozen times to various people. I was taken to a generously proportioned waiting area with a bed, chairs, a TV and curtains. I was greeted first of all by a  nurse who took the usual measurements, checked my record and asked me what allergies I had, medications etc.

After some time, the anaesthetist appeared. Upon seeing Françoise’s surname which is obviously French (Sauze) his face lit up and he spoke fluently in french to her about his life, where he lived, the fact that he had four children. They must spoken for about 10 min in French before he realised he needed to get on with the business in hand. He said he really enjoyed speaking French and did not get much opportunity to do it while in the United Kingdom.

Someone else appeared and gave me some elastic stockings to avoid blood clots and also some non-slip slippers to avoid falling on the floor. Mr Maddox, the surgeon, came and introduced himself and made sure my questions were answered. Shortly after that, a lady came to enquire what sort of sandwich I would like after the operation (we are not allowed to eat beforehand) and I ordered a ham and cheese sandwich. So far, so good.

I was taken it along by one of the male nurses to a preparation room where they give anaesthetics and generally accustom the patient.  I was given something to knock me out which worked in a very subtle way over a minute or so. The drug was a million  miles from the rather crude ‘Mallet job’ drugs in the days of old. I was given some unknown anaesthetic and then after a time was asked to breathe oxygen. I was not aware of anything happening at the time but then I felt numbness reach up to my head and the next thing I knew I woke up in the recovery ward.

I tend to  talk gibberish when I come round so I gave the staff a warning and they just smiled.

I was in the recovery room for about 30 min (the operation having taken an hour) and was attended to by a nurse and then back to the main waiting area from which I started. Someone appeared with a tray of tea, a glass of water, and a lovely sandwich which was so generous it was almost like a meal. 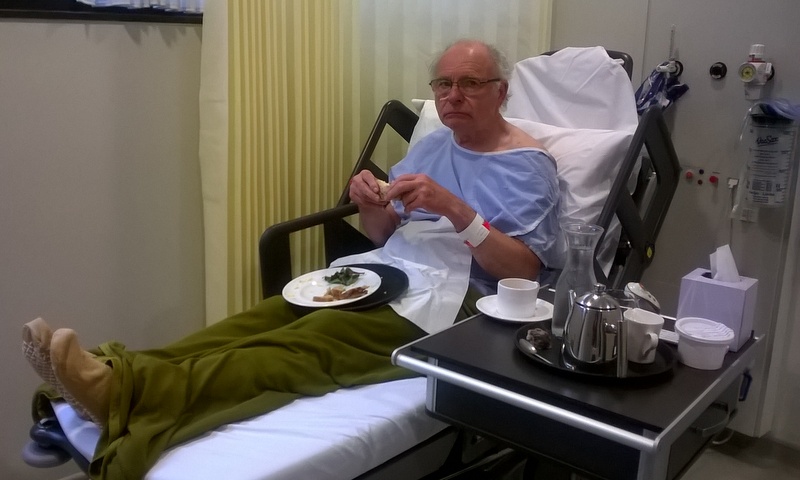 Somewhat later I felt able to get up and dressed myself but somewhat clumsily. I was given Ibuprofen, paracetamol, codeine and to counteract all these – a laxative. I did a pendulum reading and found the most effective one for me was codeine.

The time was 4:30 PM and Françoise gently drove me home and made me a hot water bottle which for some reason was very comforting when I held it close to my chest. As I write this, 6:42 PM, there is no pain but it may be because the anaesthetic has not worn off yet. I have taken no pills since arriving home.

Reflecting on the day, there is something about the hospital where teamwork prevails. You can always tell about the quality of management through the attitudes of the staff. Attitudes work downwards, not upwards. I cannot describe the day as “good” but it certainly exceeded my expectations and I feel very peaceful with the sense of a job well done.