There is no getting away from it, the atmosphere before Christmas is frenetic and the crowds bustling. We took the 11.02 am 376 bus from Street to Bristol and by the time it arrived at Farrington Gurney, it was half full. Unfortunately, there was a mechanical fault with the door and meant that at each stop the driver had to get out and manually close it before continuing. A little further on at Clutton , he announced that the bus was going to have to stop and we would have to get on the next one. However, after consultation with his colleagues, he decided that the bus would run through without stopping. Hence, we arrived in the city centre a little quicker than we expected. So who’s complaining.

There are two “all you can eat” buffets in Bristol. One of them on the harbour front is Za-Za, is one of the largest in Europe.  It provides a variety of food on an industrial scale and you can read my account of it in other entries by searching. The other one is its smaller relative, Cosmo, which is up a hill opposite the city art Gallery and Museum.  We prefer the latter because it is less noisy, slightly cheaper and let’s face it, you can only eat a stomachs worth of food at one sitting. Quality is about the same in each case. 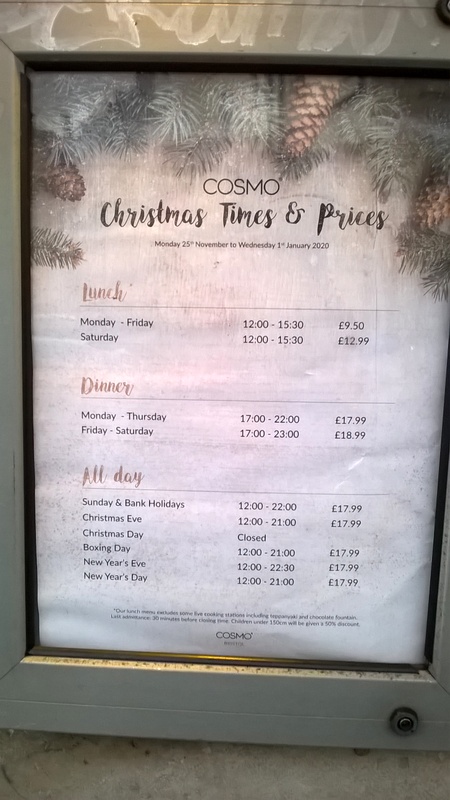 At 2:30 PM, we went to see Helen, who is a nutritionist and very well skilled in the art of sorting out stomach acidity. She discussed in detail the difference in functions of the stomach, the small intestine and then the large intestine.  All need to function well. Stomach acidity disturbs the balance of the whole body and it is easy to experience loss of concentration, feelings of low energy, and even depression. It is certainly very draining. The causes can vary with each person but in my case is affected by eating too fast and too much, the habit of eating while standing, eating food at an inappropriate time of day, eating foods that I know cause certain reactions.

I’m looking forward to receiving the report. A one hour session and follow-up report cost £160 but if it leads to a solution of a problem that has been troubling me for 20 years now, it will be more than worth it. Watch this space.