There’s nothing so powerful as an idea that has reached its time. Yesterday evening I had quite a dreadful experience with my stomach. It was a solid bloated mess and I couldn’t figure out what combination of food had caused it. For example I’m trying a course of sodium bicarbonate which I am combining with omeprazole which is a PPI proton pump inhibitor. Even though they both do good when taken separately, I’m not quite sure if the combination itself is bad and they may well be fighting each other. I have written to the practitioner to enquire.

Françoise went off to do her day work with age UK and meanwhile I decided to do some tree pruning operations in the garden. We have a couple of old apple trees and I looked on the Internet and found a very affable American who explained exactly the principles behind tree pruning and the half-hour video really helped me to have the confidence to do the job. Off to the dump with the spoil. I met my friend Gary there and we had a chat about spiritual commitment and I made a comment that we could not change others if we were ourselves not changed.

There is a program on TV called ‘Something for Nothing’ where a lady called Sarah goes to a particular rubbish tip in Altrincham, Manchester to stop people throwing things away that could be made into works of art and sold at a profit. I saw a chap pointing to something in a woman’s car asking if he could have it. It was actually a plastic filing cabinet, which was exactly what I want in order to minimise the effect of electromagnetic fields, EMF, on my working environment. I’m suffering a lot and find it difficult to hold the mouse sometimes. Anyway, the chap took one but I noticed there was another one in her boot so I asked her if I could take it and she replied in the affirmative. I took it home to find that two of the wheels had broken bases but since I did not want to use the wheels anyway it didn’t matter. 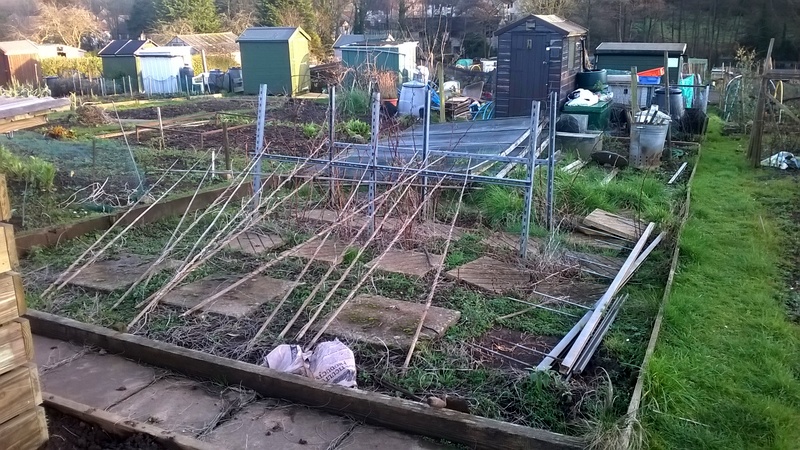 Back to the allotment which is close by to the recycle centre. I have a problem with a man of about 80 years of old who has an allotment but cannot maintain it. He gave up half but I have a suspicion that he is unable really to give the whole lot up with all the work that it involves. The plot is a complete tip, with wire netting, poles, bamboo pieces all over the place. You have to be careful with proud Somerset men, remember this is mining country, so I wrote a letter asking if he was all right and asking if he wanted any help to restore his allotment. I have no problem in helping my tenants. If that does not work  I will have to phone him.

Back home, and I wanted to take up the recommendation of a Functional Medicine practitioner who recommended that I get a particular medicament for my stomach. There was a help line on the website. I do not normally ask for help but on this occasion I did and I got through to someone called Robert, who was not so much interested in selling me the item but explaining the possible causes.

One cause was a possible trauma or traumas that could have triggered a disturbance in the stomach. He recommended going to see someone who could perhaps help me to detect what it was that caused me to dissociate a certain part of my experience. I made the contact and got an appointment with someone who had just had a cancellation so at 3.45 PM this Thursday I shall be exploring this avenue. He also mentioned someone called Wim Hof, who helps the body alkalize through correct breathing. You can find his very impressive breathing tutorials on you Tube.

I definitely feel better at the moment and am reminded of the old phrase that when the student is ready, the master will appear. I feel also that it sometimes takes a drama to precipitate us into making a move forward.

We had another wonderful sunny day today with no cloud in the sky above. I feel a hundred percent better than I did first thing this morning when I got so desperate I rang the Dr. He was helpful and positive but sometimes the answers lie outside allopathic medicine.

Another cold night, an excuse for lighting our log fire and sitting in front of it watching TV.