To the minor injuries clinic this morning at eight o’clock. I have a troublesome toe that does not heal and looks rather red and angry. According to the nurse, my blood sugar levels are regular at 4.5 whatever that means. She suspects that I have early symptoms of chilblains, which is basically due to bad circulation. I must avoid walking round with bare feet and make great attempts to keep my circulation going through exercise. This is where gardening comes in useful but during the winter I don’t have jobs. 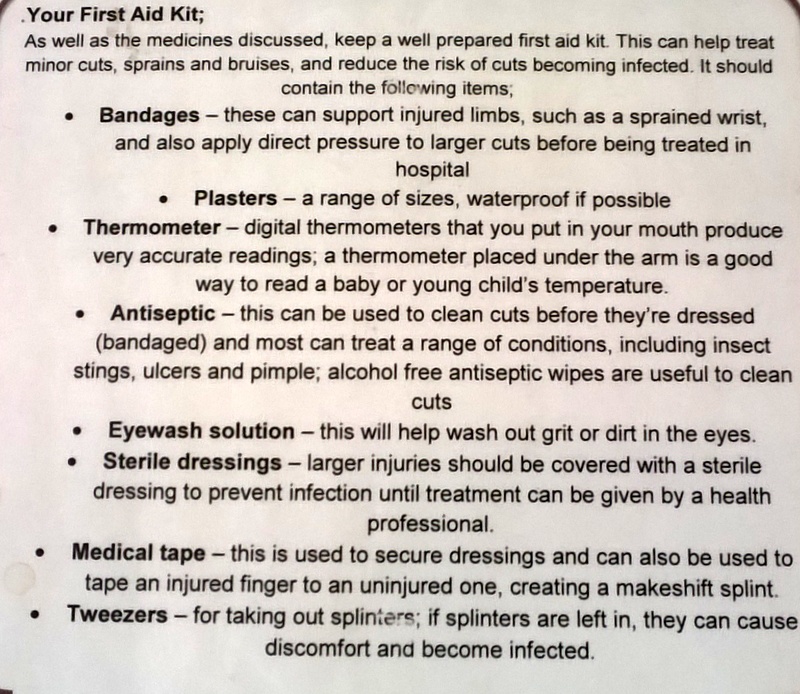 I was intrigued by the above poster in the waiting room.  I must discipline myself more in getting a first aid kit together and putting it in my car. If it’s not helpful to me it might be helpful to someone else. Little did I know how relevant this would be for an event that happened three hours later.

Off to Glastonbury for the celebration of the first stirrings of spring, Imbolc it is called. We parked on the street and I came across this excellent example of a Morris thousand, registered in 1970. They have the appellation of extremely long life. They don’t make them like that any more. The dashboard was so primitive, it scarcely had any controls  apart from the speedometer and a couple of lights. I had a nostalgic moment. 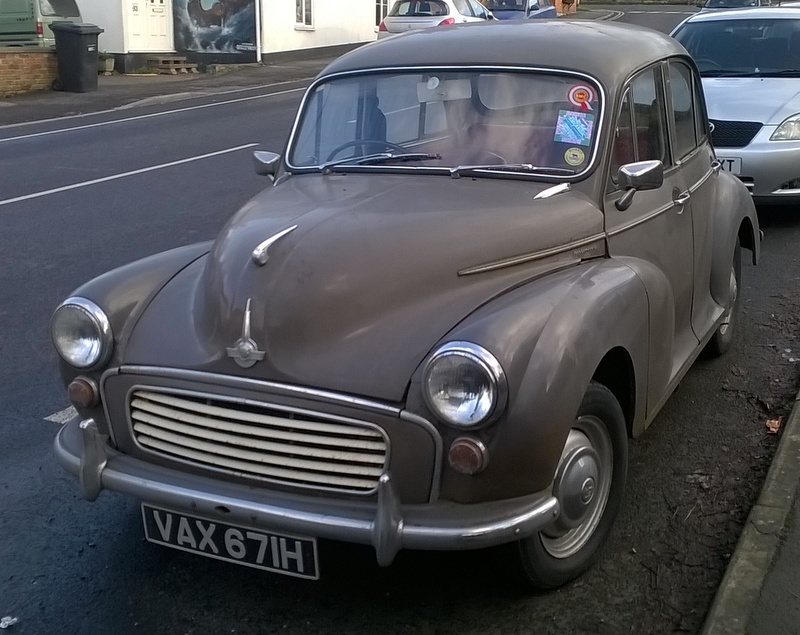 On the way to Chalice Well for our celebration, I was distracted by a factory outlet opposite selling shoes and slippers and the like. I have never before been remotely tempted to go there, but this time I had the impulse to visit it.  We were in there for a few minutes when a woman came in calling quite loudly saying that someone had fallen down some steps, quite a lot of blood was gushing from their head and they needed an ambulance. I poked my head out of the factory entrance and although I would not say blood was gushing from him, it was pouring out of his face in some volume.

The owner of the shop came out, duly called an ambulance and was kept on the phone while the operator got as much information as they could. I said I would go to the roadside and direct the ambulance. I could not quite see at the time why I should do this since the ambulance had been given the address but I was soon to find out.  I waited at the roadside, saw an ambulance, and flagged it down. It was slightly strange that it did not stop straightaway but went on and then reversed. They said they were on their way to a child that had fallen.

I told them that I was expecting an ambulance for an old person who had fallen on their head and was bleeding so they decided to abandon their original journey and go along to see what was going on. They spoke to control who agreed someone else would go along to the original caller. The result was that the patient was attended to much earlier than he otherwise would have been. The lesson is – as if I needed to hear it again – that the intuition can be trusted. Even though it doesn’t make sense to the left brain it should still be listened to and respected. 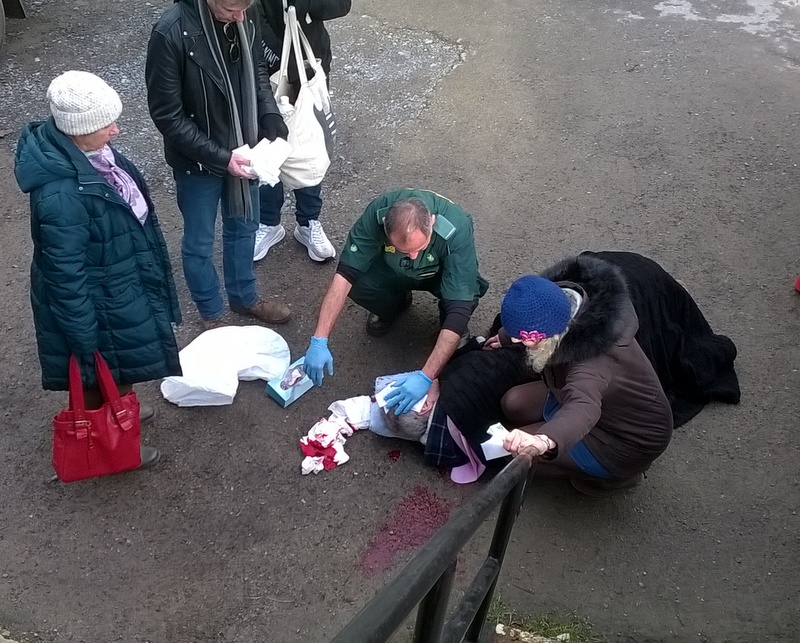 The pair from the ambulance were very good indeed, they had a great sense of humour and just made everyone relax including the people who  were traumatised from seeing the accident in the first place and that included the daughter of the man concerned. It just goes to show that anything can happen at any time to anyone and we should always be on the alert. The wounded man was very complimentary about the high quality of care he received and interestingly, the people who attended to him were on their way to the celebration at chalice well. What better place to have an accident could there be? 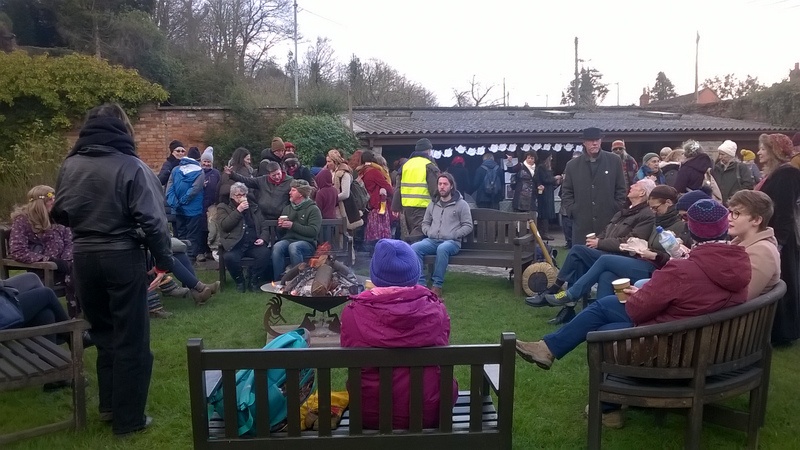 I do enjoy these visits very much even though I don’t talk to people an awful lot. Irrespective of whether I take part in the celebration or not, it’s just nice being there It’s a little bubble spiritually, where genuinely nice people meet together. There is a certain type of women who come here. I cannot say they are assertive but I can say they really enjoy being female, enjoying each other’s company and have demonstrable relationships that us men are not so good at doing. I have spoken before about the Goddess centre so just do a search and you’ll see what I think. 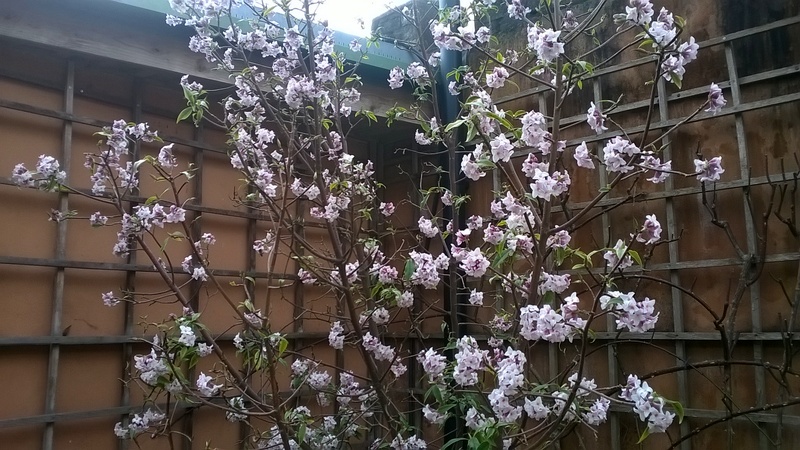 It’s lovely to see spring flowers, and the cherry blossom which shows that nature is really waking up now. The weather was lovely and sunny, with a slight wind from the South West and we could see in the distance many people walking up Glastonbury Tor from where I’m sure the view was tremendous. 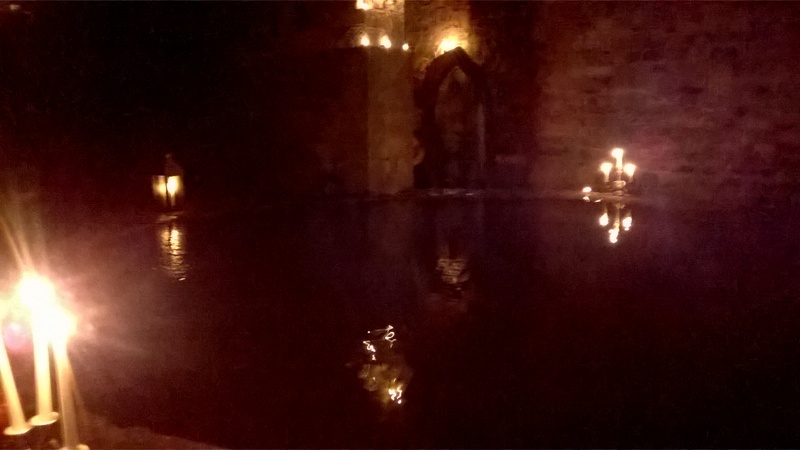 You are lucky if you get into the adjacent building because it is not often open. It is called the White Spring. . It is described as a natural, calcium – which spring in a Victorian pump house, now a free entry temple and pilgrimage site. If you’re interested in going it is BA6 8BL. The waters of the wells in the area rush across the stone floor.  The tinkling sound of the water combined with the lovely glowing candle lights makes an almost surreal environment, about as far as you can get from the everydayness of consumerism.

To am appointment to see a possible garden job. The chap wanted a hedge cut or so he told me on the phone but in fact it was a division between a back garden in a new housing estate and a field. There were a number of different types of trees that composed the hedge and it was more than 1 meter in depth so making it almost impossible to reach to the back. In addition, I was not able to dispose of the spoil in the field and would have to get it through a narrow gate. Apart from the job,  I did not particularly like the attitude of the man so I ran a mile but did say I would try and find someone to help him.

And so to home, writing this diary and preparing for my trip tomorrow to see my new car. I had to get together £1400 which I did by taking bits out of my accounts every day because there is a limit to what you can take out each day as you probably know.

So, a memorable day and yet another reminder to me of the synchronicity that prevails in the universe. It was the only occasion that I wanted to visit the shoe outlet and we have been coming here for about 10 years now.