Earlier this week, the George Soros funded and programmed Greta Thunberg announced by text that she was coming over to UK to relate to the kids and take part in what turned out to be a march culminating in a speech at Palace Green in Bristol.  When I heard about it, I prayed for bad weather to keep the numbers down because I hate seeing attempted brainwashing by this ignorant girl who has no idea about anything and speaking to impressionable youngsters instilling fear into them. In the event there were 30,000 people mostly youngsters.

The police in their wisdom decided to close off the centre of the town to traffic fearing that the crowds would cause danger through crushing. 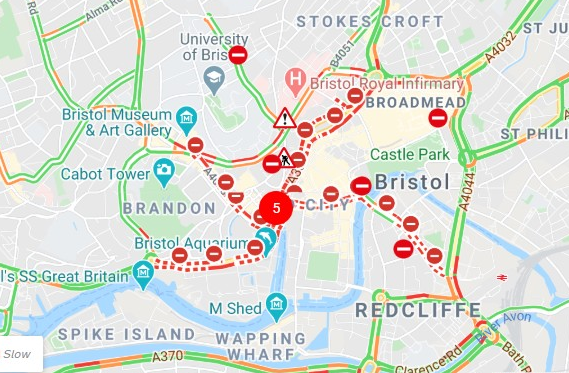 The rain started at about seven o’clock this morning.  It rained so hard that when I went to pick up my newspaper from the front door, half of it was sodden so I had to spend 10 minutes ironing the pages dry.

Greta was on mainstream media TV, not unsurprisingly, and told us that ‘the world was on fire and that we had no alternative but to do something’, we are coming to get you etc. The children who had taken a day off from school were lapping it up.  The adults watching the show had that particular curious grin on their faces showing that they were totally hypnotised, believers etc. “I think she was wonderful” etc.  This Climate Change has truly entered into a post-scientific post logical indeed post brain phase and is now like a religious cult.  If I were to ask these people to explain the Middle Ages warming period or the Roman warming period they wouldn’t know what I was talking about.

I don’t know how many people actually believe what she is saying.  My guess is mostly the impressionable youngsters.  The 30,000 people made a great impression on the grass of College Green in Bristol.  I wonder how long that will take to recover.  With the rain and a little bit of heat a couple of months

I try to maintain a neutral view and tell people to listen to Piers Corbyn or Lord Monkton ( I know I’ve said this before but I’m saying it again) and they would realise – if they choose to think – that the whole thing is based on nonsense, a con designed to scare us all. You might as well try to take action against the sun as to change the climate through flying less or burning of coal.  It does make me dispirited if not depressed.

This evening we went to a poetry reading session at Paulton church. I had a chat with the verger and he told me that the new vicar who is coming at the end of April and has six children is going to convert the garage into another bedroom.  He also wants to put a video screen up in the chancel to give talks and so on. There were about 20 others and each one of us read some poetry or a story that was important to us including excerpts from “the prophet” by Kahlil Gibran.  I read an excerpt from my diary of a youth hostel holiday from London to Dover in the summer of 1960.  It was amazing how fundamentally the social mores and expectations have changed.

I recorded that I had a roast meal for 3 and 6 pence.  That’s equivalent to about 16 pence in today’s money – 20 cents in USA.  It was a very nostalgic evening.  I feel that the best entertainment is home entertainment.  You can’t beat simple fellowship.  All the ‘likes’ in the world cannot compete with human companionship, the gentle touch of a hand, a smile, having someone wish you all the best. We had a very good supply of tea, coffee, bread and cheese, and lovely chocolate cake squares.

Little did I know that the diary I started when I was 12 would be continued 60 years later.   Samuel Pepys diary was kept for about 10 years.  He stopped because he was worried about losing his eyesight.  I have been writing my diaries for three years now, I wonder how much longer I will go on.  I have no incentive to stop and it has become part of my end of day routine.